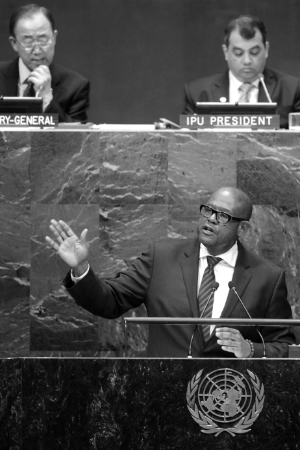 Forest Whitaker believes that, in order to attain peace and prosperity, communities and nations must heed the voices of their diverse and vibrant youth. He and the Whitaker Peace & Development Initiative are committed to providing educational tools and better living conditions to young women and men living in regions touched by violence, war, and poverty.

Whitaker is the founder and CEO of WPDI, co-founder and chair of the International Institute for Peace at Rutgers University, Newark, UNESCO Special Envoy for Peace and Reconciliation, and a member of the United Nations Sustainable Development Goals Advocacy Group. He is dedicated to cultivating youths’ artistic talents. As a member of the President’s Committee on the Arts and the Humanities, he is working closely with elementary school students to demonstrate the limitless power of the arts to express their voices and creative energies.

In addition to his social activism, Whitaker is one of Hollywood’s most accomplished and versatile figures. Through his production companies, Significant Productions and JuntoBox Films, he aims to support young, talented filmmakers. He believes that film can enlighten people across the globe and can start meaningful dialogues about important subjects. He has produced several award-winning documentaries that touch on a wide range of social issues. He has also received many distinctions for his acting, including the 2007 Academy Award for Best Actor for his portrayal of Ugandan dictator Idi Amin in The Last King of Scotland, a performance for which he also received a BAFTA Award, SAG Award, and Golden Globe. In addition, Whitaker received the Best Actor Award for Bird at the 1988 Cannes Film Festival.

Whitaker’s artistic and humanitarian contributions have been widely recognized at home and abroad. In 2007, he received the Cinema for Peace Award for his ongoing advocacy for child sol-diers and his work with inner-city youth. He was awarded the Humanitas Prize in 2001. In 2008, he was a member of Barack Obama’s Urban Policy Committee.

Whitaker currently serves as a senior research scholar at Rutgers University and a visiting professor at Ringling College of Art and Design. In 2013, Boston University’s Howard Gotlieb Archival Research Center appointed Whitaker a Martin Luther King, Jr. Fellow. That same year, he was made a Knight of the Order of Arts and Letters by the French government in recognition of his work serving those affected by conflicts and violence. Over the past few years, he has also re-ceived awards honoring his humanitarian work from the Los Angeles Press Club, the Broadcast Film Critics Association, the NAACP, Refugees International, the MLK Health Foundation, and more.

Whitaker’s commitment to peace and social justice has led him to work in close collaboration with UNESCO. In 2011, Whitaker was designated a UNESCO Goodwill Ambassador for Peace and Recon-ciliation. In this role, he works toward global peace and community building through non-violence education, research, and training. In 2012, in recognition of his contributions to the values embodied by the UN, Whitaker received the United Nations Correspondents Association’s Advocate of the Year Award. In 2014, he started collaborating with the Office of the Special Representative of the UN Secretary-General for Children and Armed Conflict as an Advocate for Children Affected by War, a topic on which he was invited to speak before the UN Security Council in September of that year. Also in 2014, in line with this new partnership and following his increased work in conflict-impacted regions, he was designated a UNESCO Special Envoy for Peace and Reconciliation. In 2016, he was appointed to the Sustainable Development Goals Advocacy Group by the UN Secretary-General.

Above all, Whitaker believes that ordinary people can and must come together to change the world. In his own words, “Even a seemingly small action can cause ripples that make an enormous impact.”