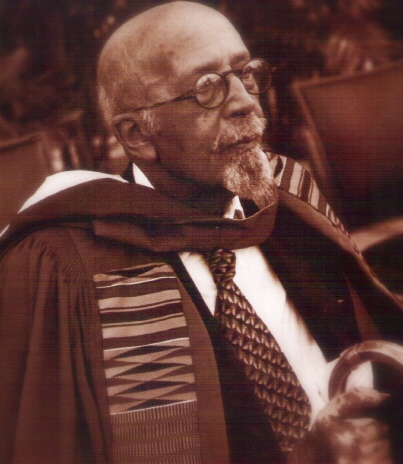 To commemorate the 40th anniversary of W.E.B. Du Bois' death, and in honor of the centennial anniversary of the publication of his classic work, The Souls of Black Folk, The Rutgers Institute On Ethnicity, Culture, & the Modern Experience organized the first-ever “one book” literary event for the city of Newark in cooperation with the Newark Mayor’s office. Modeled on the successful “One Book” events held in Chicago, Hartford and other cities, in which one city hosts a “book club” involving hundreds of thousands of citizens, the month-long literary event entitled, Newark Reads Du Bois, wsa kicked off at the 23rd Annual Marion Thompson Wright Lecture Series on Saturday, February 15, 2003.

Newark Reads Du Bois was comprised of a series of literary events, produced throughout the city, designed to educate and inspire readers of all ages to celebrate Du Bois’ life and groundbreaking work. Two thousand free copies of The Souls of Black Folk were distributed to Newark residents through the 10 branches of the Newark Public Library, and special programs for students, adults, and the public focused on Du Bois, his classic text, and the history of African-Americans and the African Diaspora.

The Newark Reads Du Bois literary event festivities officially began with the 23rd Annual Marion Thompson Wright Lecture Series. Part of Rutgers University’s Black History Month observance, the Marion Thompson Wright Lecture Series is one of the nation’s oldest public scholarly programs devoted to the enhancement of literacy in African American and African history in a local community. The series regularly draws hundreds of observer-participants, as well as local dignitaries.  With this event being titled, W.E.B. Du Bois in Africa

Newark Mayor, Sharpe James, an enthusiastic supporter and sponsor of Newark Reads Du Bois, attended the February 15th lecture series program, along with several Deputy Mayors, and other city and state officials. “W.E.B. DuBois is one of our nation’s greatest moral leaders and “The Souls of Black Folk” is central to the struggle for civil rights,” said Mayor James. “It is truly appropriate to honor Dr. DuBois and his legacy by fostering reading and literacy programs that focus on his work. It will be a pleasure and a privilege to support this exemplary project.”

Other attendees included His Excellency, Alan Kyerematen, the Ambassador of the Republic of Ghana to the United States.
Mr. Kyerematen’s attendance was especially significant as Du Bois spent his last years in Ghana, at the invitation of then Ghanaian President, Kwame Nkrumah, where he became a citizen six months before his death in 1963 at the age of ninety-four. He is buried in Ghana.

Also featured was New Jersey’s own Du Bois expert and Pulitzer Prize winning scholar, David Levering Lewis, who gave the keynote lecture. David Levering Lewis, the Rutgers University Martin Luther King Jr. University Professor of History, has twice received the Pulitzer Prize for biography for both volumes of his history of Du Bois, including Volume I: W.E.B. Du Bois: Biography of a Race, 1868-1919 (awarded in 1994), and Volume II: W.E.B. Du Bois: The Fight for Equality and the American Century, 1919-1963 (awarded in 2001).