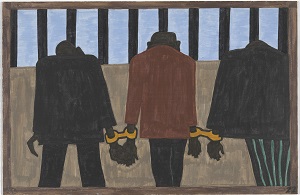 The Paul Robeson Campus Center
Rutgers University, Newark Campus
350 Martin Luther King Jr. Blvd.
Newark, NJ 07102
Issues of policing and incarceration – both locally and nationally - will be in sharp focus as the thirty-sixth annual Marion Thompson Wright Lecture Series (MTW) invites a wide-ranging discussion of the historical developments that have brought us to events in Ferguson, Baltimore, Chicago, and so many other American towns. The annual Black History Month conference will be held on Saturday, February 20, 2016, beginning at 9:30 a.m. on the campus of Rutgers University-Newark.

Long Time Here: Prisons and Policing in African-American History will emphasize, as MTW traditionally does, the ways that history helps illuminate our contemporary world. Ruth Wilson Gilmore, cofounder of Critical Resistance, author of Golden Gulag: Prisons, Surplus, Crisis, and Opposition in Globalizing California, and professor at the CUNY Graduate Center will give the MTW keynote lecture. Two other lectures will be given by Khalil Gibran Muhammad, director of the Schomburg Center for Research in Black Culture and author of The Condemnation of Blackness: Race, Crime, and the Making of Modern Urban America; and Heather Ann Thompson, professor at the University of Michigan and author of the forthcoming Blood in the Water: The Attica Uprising of 1971 and Its Legacy.

MTW will also celebrate Newark's 350th with a panel discussion on the history of police reform in Newark, featuring Newark Mayor Ras Baraka; Junius Williams, director of the Abbott Leadership Institute at Rutgers University-Newark and chairman of Newark Celebration 350; Lawrence Hamm, chairman of the People’s Organization for Progress; and Deborah Jacobs, former director of the ACLU, New Jersey.

Following the conference, MTW attendees are invited to a reception at the Newark Museum that will feature live musical entertainment by The Bradford Hayes Trio.

All events are free and open to the public.

The Marion Thompson Wright Lecture Series is presented by the Clement A. Price Institute on Ethnicity, Culture, and the Modern Experience; the Federated Department of History, Rutgers University-Newark/New Jersey Institute of Technology; and the Department of African American and African Studies. The 2016 conference receives additional support from: Prudential; the New Jersey Historical Commission/Department of State; and the New Jersey Council for the Humanities.