Laboring in the Vineyard: Scholarship and Citizenship 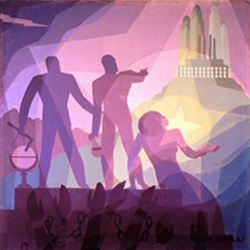 Fourteen previous Wright lecturers and historical luminaries from the past three decades assembled to speak to the 2010 theme in a series of panel discussions examining the past, present, and future of African-American scholarship. Rutgers Professor Annette Gordon Reed, a noted Jeffersonian scholar and the 2009 Pulitzer Prize recipient for her book, The Hemingses of Monticello, gave the Wright Lecture on Saturday, February 20th. Special guest speakers will also include Lonnie Bunch, founding director of the National Museum of African American History and Culture, Smithsonian Institution.

The 2010 Wright Lecture Series opened with two panel discussions on Friday, February 19th.  The Making and Evolution of the Field, featured panelists John Bracey, Eric Foner, Sterling Stuckey, and Cheryl Wall, who explored the extraordinary profusion of scholarship on African American historical narratives and themes over the past generation. Panelists Spencer Crew, James Oliver Horton, Joe William Trotter, and Deborah Gray White examined the role of the scholar as an actively engaged citizen in the second panel of the day, The Scholar in Civic Space.

Following Annette-Gordon Reed’s keynote lecture on Saturday, February 20th, afternoon panel discussions looked at Citizenship, History, and Remembering African American Life, an exploration of African American historical scholarship, and the study race, as a contested feature of American democratic discourse and scholarship with panelists David Blight, Bob Herbert and Wilson Jeremiah Moses. The final panel of the conference, What’s Ahead for the Field? with panelists Nell Painter, Bernice Johnson Reagon and Bettye Collier Thomas, examined how the future of American historical scholarship is being shaped by the field.

The lecture series was co-founded in 1981 by Dr. Clement Price, Board of Governors Distinguished Service Professor of History at Rutgers University, and Giles R. Wright, from the New Jersey Historical Commission. Over the past 29 years, the conference has drawn thousands of people to the Rutgers-Newark campus, and has attracted some of the nation’s foremost scholars and humanists who are experts in the field of African and African American history and culture.

“We know of no other campus, and certainly not of another community, that for so long has generously embraced the new ways we Americans and citizens of the world now understand and honor the historical narratives of Africans on American soil,” according to Dr. Price. “With that in mind, the Marion Thompson Wright Lecture Series is a civic ritual without peer. It is also a prominent symbol of civic engagement, public scholarship at a very high level, and community endearment to lifelong learning.”

The annual conference was named for East Orange native Dr. Marion Thompson Wright, a pioneer in African American historiography and race relations in New Jersey, who served for many years on the faculty of Howard University. An honors graduate of Newark’s Barringer High School and Columbia University’s Teachers College Class of 1938, she was the first professionally trained woman historian in the United States.

The Marion Thompson Wright Lecture Series is sponsored by the Rutgers Institute on Ethnicity, Culture, and the Modern Experience, the Federated Department of History, Rutgers-Newark and the New Jersey Institute of Technology; and the New Jersey Historical Commission/Department of State. The 2010 conference is being mounted with major funding support from the Prudential Foundation, and receives additional support from the New Jersey Council for the Humanities, and the Rutgers Committee to Advance Our Common Purposes.