Brown vs. Board of Education of Topeka, Kansas: A Retrospective 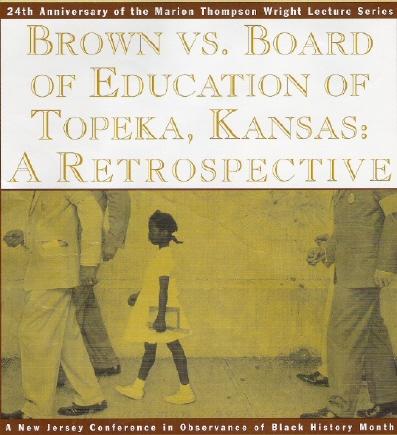 The theme, Brown v. Board of Education of Topeka, Kansas: A Retrospective, reflected upon the impact of this groundbreaking judicial decision and its resonance within American society a half-century later.

Roger Wilkins, distinguished member of the Brown v. Board of Education 50th Anniversary Commission, established by President George W. Bush and the U.S. Congress, delivered the 24th Annual Marion Thompson Wright Keynote Address. Mr. Wilkins is currently the Clarence J. Robinson Professor of History and American Culture at George Mason University, and past chairman of the Pulitzer Prize Board.

During the Johnson administration, Wilkins served as Assistant Attorney General. In a distinguished journalism career, he has written for both the New York Times and The Washington Post. While on the editorial page staff of the latter, Mr. Wilkins shared a Pulitzer Prize in 1972 for Watergate coverage with Woodward, Bernstein and Herblock. His highly acclaimed autobiography, A Man's Life (1982), was reprinted in 1991, and he was co-editor with Fred Harris of Quiet Riots in 1988.

Among an array of public service activities, Mr. Wilkins served as past chair of the Board of Trustees of the Africa America Institute and is a member of the Board of the NAACP Legal Defense Fund. He is publisher of NAACP's journal Crisis and is an appointed member of the District of Columbia Board of Education. Wilkins holds a law degree from the University of Michigan. His book Jefferson's Pillow: The Founding Fathers and the Dilemma of Black Patriotism was published in 2001 and won the 2002 NAIBA Book Award for Adult Non-Fiction.

On September 6, 2002, U.S. Secretary of Education Rod Paige and U.S. Attorney General John Ashcroft announced the creation of the Brown v. Board of Education 50th Anniversary Commission, created to encourage and coordinate activities to commemorate the May 17, 1954 ruling.

Since its inception, the Commission has been working with the Department of Education and the Brown Foundation to “plan and coordinate public education activities and initiatives, including public lectures, writing contests and public awareness campaigns.” The co-chairs of the commission are Gerald Reynolds, assistant secretary of education for civil rights and Ralph F. Boyd Jr., assistant attorney general for civil rights. President George W. Bush worked with leaders from the U.S. Senate and the U.S. House of Representatives to select distinguished Americans from across the country to serve as commissioners representing all of the states where the Brown litigation began (Kansas, Delaware, the District of Columbia, South Carolina, and Virginia).

Considered to be one of the most important decisions ever issued by the U.S. Supreme Court, the case of Brown v. the Board of Education of Topeka, Kansas was argued, from 1952 – 1953, by Thurgood Marshall, legal director of the NAACP. On May 17, 1954, the Supreme Court unanimously declared, “separate educational facilities are inherently unequal" and, as such, violate the 14th Amendment to the United States Constitution, which guarantees all citizens "equal protection of the laws."

Brown v. Board of Education actually encompassed cases from Kansas, Delaware, the District of Columbia, South Carolina, and Virginia, all of which challenged the constitutionality of racial segregation in public schools that was established by the Plessy v. Ferguson Supreme Court decision of 1896. The Court consolidated these five cases under one name, “Oliver Brown et al. v. the Board of Education of Topeka.” One of the justices later explained that the Court felt it was better to have representative cases from different parts of the country. They decided to put Brown first “so that the whole question would not smack of being a purely Southern one."