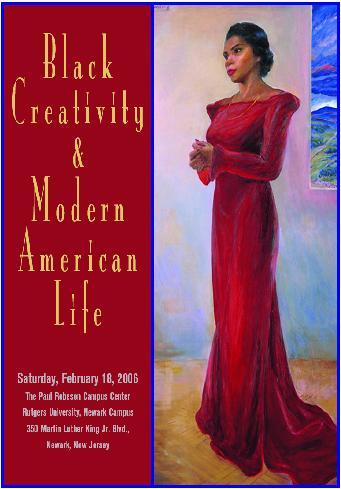 The oldest and one of the most prestigious scholarly celebrations of Black History Month, this series delved into the traditions of black Americans, those who placed black speech, music and movement at the center of American culture, making it truly distinctive and unique.

“A growing number of Americans have discovered that black voices are at the center of American culture; that discovery has helped guide the nation toward a more sophisticated understanding of its history,” said Clement Alexander Price, co-founder of the lecture series and director of the Institute for Ethnicity, Culture and The Modern Experience (IECME), a MTW series sponsor.

The theme for this MTW program was not grounded by a specific historical event or cultural anniversary, rather it revolved around the black voice, be it literary, musical or even the voice of movement, in American culture. Series scholars presented the black voice as music, arguing that writers’ words are music in the same tradition as jazz, blues, gospel and be-bop.
Keynote speaker Cheryl Wall, a Rutgers-New Brunswick English professor, borrowed a musical term as the title of her work exploring the voices and literary techniques of black women writers in “Worrying the Line: Black Women Writers, Lineage and Literary Tradition.”
Wall has taken “worrying the line” from blues tradition in which musicians worry the line or break musical phrases by changing pitch or adding embellishments - a shout, words or repeated sounds - to emphasize a musical passage.

Just as the musicians break traditional phraseology, so too, did these early 20th Century women writers subvert literary convention and improvise on established literary tradition. These breaks in phraseology account for missing personal and cultural history and include the creation of spectral characters and dream interpretation.

“My aim was to reach more than the few hundred scholars in my field and to inspire fans of black women writers to read and reread some of the classic works,” Wall said.

One of the nation’s foremost authorities on jazz and black literature, Robert O'Meally, currently sitting as the Zora Neale Hurston professor of English at Columbia University, offered comment on Wall’s work. His presentation; an “Ecstasy of Influence: Celebrating Professor Wall's 'Worrying the Line'" will follow her morning lecture.

The afternoon session startsed with a dance by Newark native and Senior Arts High School dance major Justin Dominic Melvin. He was a pre-ballet teacher at the Newark School of the Arts and taught hip-hop at the Queen of Angels School in the city. He danced in the Queen Latifah Show, Amateur Night, Showtime at the Apollo and the NJ Performing Arts Center in the Harlem Nutcracker and Dance Jam.

His performance was followed by Brenda Dixon Gottschild, a professor of dance at Temple University. Guided by the premise that dance is a barometer of society, Prof. Dixon Gottschild measures the pulse of contemporary American cultural practice. By means of a slide lecture augmented with demonstrations on her own dancing body, she examined the pervasive Africanist presence in American culture and the sociopolitical implications of its invisibility. With dance as the focus and race the parameter, she reveals Africanisms in ballet, modern, and postmodern dance.

Renée Ater, a University of Maryland professor with the department of Art History and Archaeology, explored “Aaron Douglas’s Into Bondage and Aspiration: The Representation of Race, History, and Modern American Life at the Texas Centennial Exposition of 1936.”

Author, poet, critic and lecturer A.B. Spellman, formerly of the National Endowment for the Arts rounded-out the lecture portion of the program. Spellman started his career there as director of the expansion arts program and spent the last decade as the deputy chairman.

An expert on jazz, Spellman is the author of “Four Lives in the BeBop Business; now available as “Four Jazz Lives,” and other works of poetry and critical analysis. He has served on numerous arts panels. Spellman explored “The Black Arts Movement: Social Activism as Esthetic Guide,” during the afternoon. He returned to the Marion Thompson Wright lecture series after a 24-year absence.

Wrapping up the series was a live jazz performance by the Steve and Iqua Colson Sextet, followed by a wine and cheese interlude during which the professors and public can confer and socialize.