The Space Between the Notes: The Social Life of Music in Black History

The Space Between the Notes: The Social Life of Music in Black History 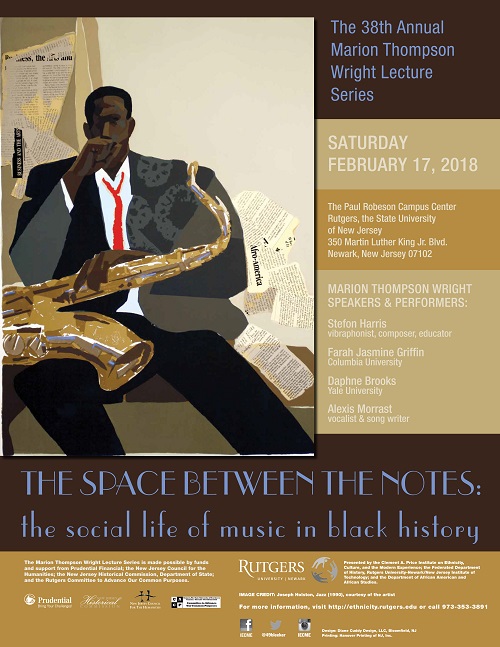 The thirty-eighth entry in the series weaves together the academic and the artistic to explore the social roles of music in black history. Speakers and performers will delve into the history and current state of music in the black diaspora from a variety of angles. At a time when artistic production is so closely interwoven with Newark’s continued development, we seek to draw lessons from music’s history of helping imagine and create a more inclusive and just city, nation, and world. Together, the featured speakers and performers will offer a profound demonstration of music’s power to forge community, provide refuge in troubled times, and move us toward better futures.

The keynote lecture will be delivered by Stefon Harris, four time Grammy-nominated jazz vibraphonist, recipient of the prestigious Martin E. Segal Award from Lincoln Center, and eight-time Best Mallet player as determined by the Jazz Journalists Association. Harris received his Bachelor of Music degree in classical music and Master of Music degree in jazz performance at Manhattan School of Music. He teaches in person at universities throughout the world and virtually via his Distance Learning Studio, has led curriculum development at the Brubeck Institute, and serves as Artistic Director of Jazz Education at the New Jersey Performing Arts Center.

The day’s other lecturers and performers will be:

Following the conference, MTW attendees are invited to a reception at the Newark Museum. The reception will feature food, drink, and live musical entertainment by The Bradford Hayes Trio.

All events are free and open to the public.

The MTW lecture series was co-founded in 1981 by the late Dr. Clement A. Price, Board of Governors Distinguished Service Professor of History at Rutgers University, and the late Giles R. Wright, director of the Afro-American History Program at the New Jersey Historical Commission. Over the past thirty-seven years, the conference has drawn thousands of people to Rutgers University-Newark and has attracted some of the nation’s foremost scholars and humanists in the field of African and African American history and culture. It has become one of the nation's leading scholarly programs specifically devoted to enhancing the historical literacy of an intercultural community.

The annual conference was named for East Orange native Dr. Marion Thompson Wright, a pioneer in African-American historiography and race relations in New Jersey, a pioneering historian of race and education, and among the earliest professionally trained women historians in the nation.

The Marion Thompson Wright Lecture Series is presented by the Clement A. Price Institute on Ethnicity, Culture, and the Modern Experience; the Federated Department of History, Rutgers University-Newark/New Jersey Institute of Technology; and the Department of African American and African Studies. The 2018 conference is made possible by funds and support from: Prudential, the New Jersey Historical Commission/Department of State, and the New Jersey Council for the Humanities.