Thalamus and amygdala link up to regulate fear 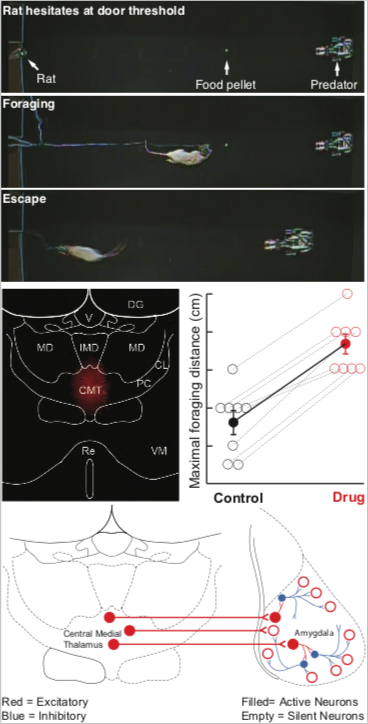 From mice to humans, the same network of brain structures regulates fear and anxiety. Central to this network is the amygdala, a structure of the temporal lobe that plays a critical role in generating defensive behaviors. In a recent study, Mohammad Herzallah, Alon Amir, and Denis Paré examined how a poorly understood input to the amygdala regulates the behavior of rats when they are confronted with predators. They found that after pharmacologically silencing the thalamic cells contributing this input, rats ignored predators and became seemingly fearless. Comparing the activity of cells in the amygdala and this thalamic nucleus also shed light on the complex network interactions underlying defensive behaviors. 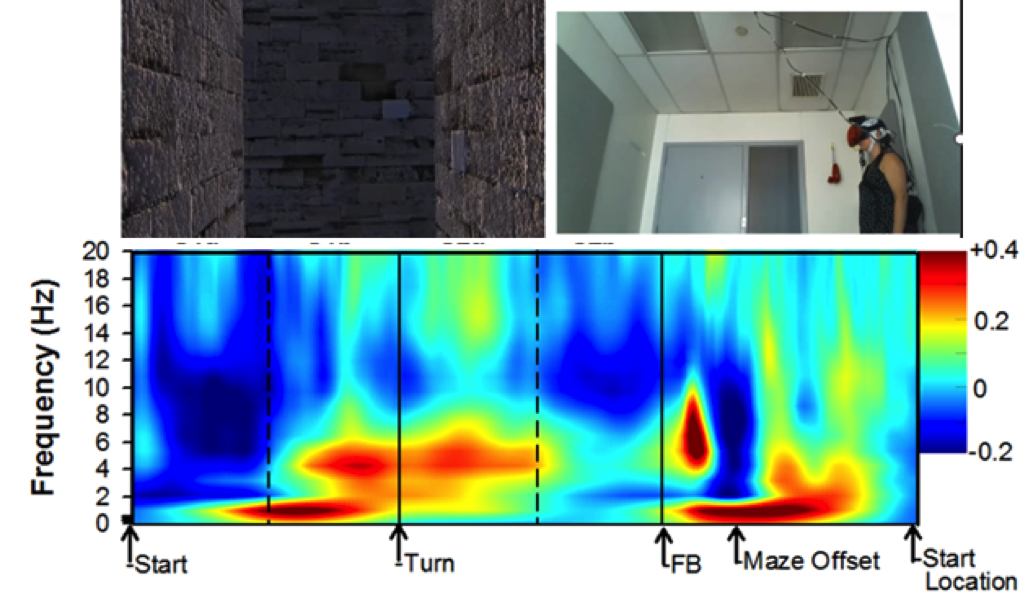 Studies in rodents have produced a wealth of information about the role of the brain’s theta oscillations (4–12 Hz) in encoding spatial information during navigation, such as speed, direction, and the location of reinforcement. Whether humans also exhibit these theta dynamics during navigation is still unknown. In this study Dr. Mei-Heng Lin, Dr. Omer Liran, and colleagues from the laboratory of Dr. Travis Baker identify for the first time the electrophysiological activity in humans freely navigating a virtual T-maze to find rewards. By combining mobile electroencephalography (EEG) and fully a immersive virtual-reality display, their results revealed that scalp-recorded theta activity was modulated by speed and direction during navigation, and during decision-making and reinforcement. These results suggest that recording scalp EEG in freely moving humans navigating a simple virtual T-maze can be utilized as a powerful translational model by which to map theta dynamics during “real-life” goal-directed behavior in both health and disease. 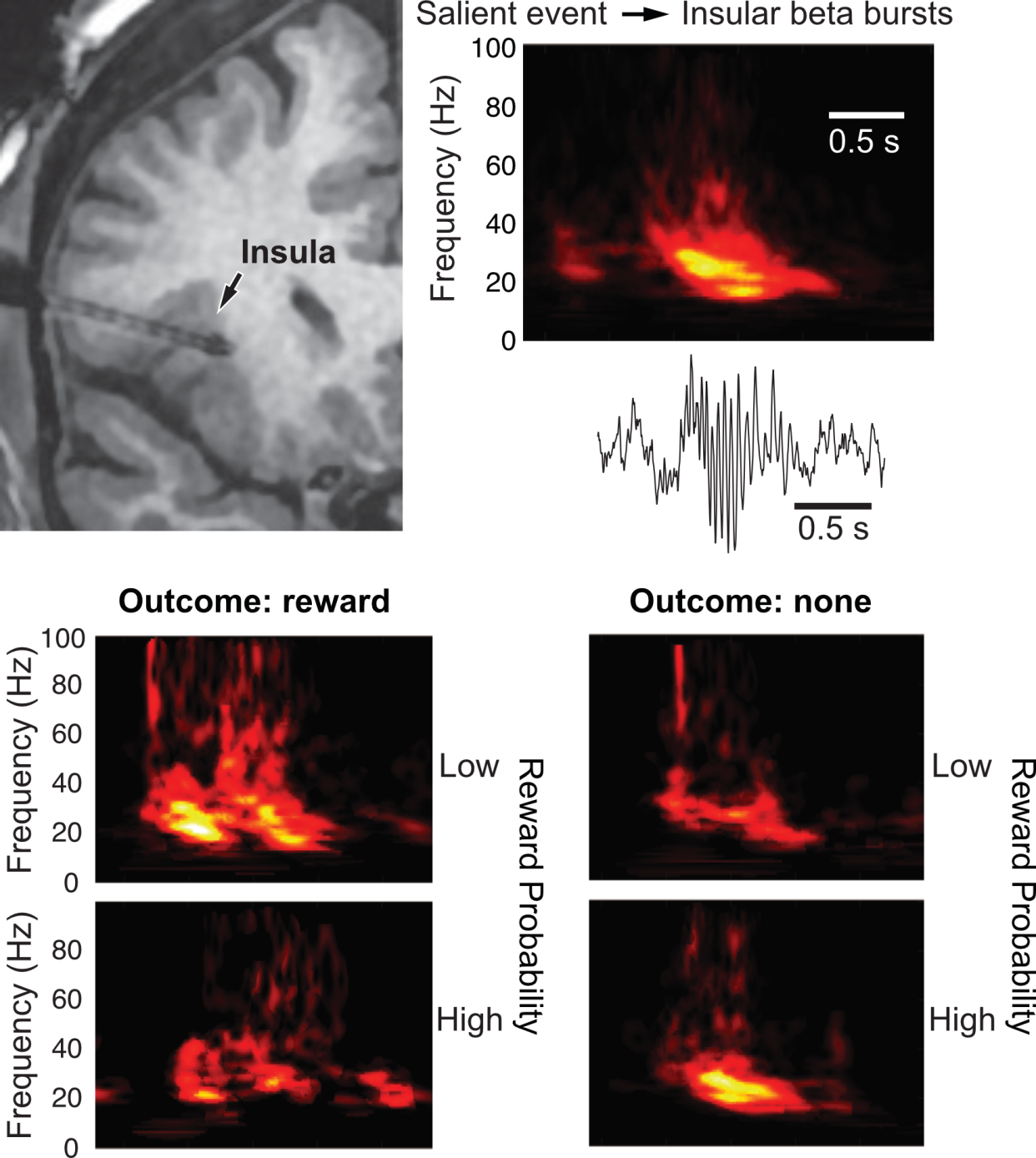 Deep within the folds of the cerebral cortex is a region known as the insula, and one of its main functions is responding to stimuli that are surprising, or that deviate from expectations.  In this study Dr. Darrell Haufler and colleagues from the laboratory of Dr. Denis Pare identify for the first time the neurophysiological activity that drives these salience signals. By combining intracranial recordings in epilepsy patients along with a virtual reality task, they show that surprising events produce a large increase in rhythmic "beta burst" activity in the insula. These beta bursts not only signal salient events in the insula, but also appear to coordinate with increases in rhythmic activity in other distant cortical areas, suggesting that the insula broadcasts its salience signals widely throughout the brain.

More from this laboratory

Protecting the temporal lobe with exercise

The medial temporal lobe (MTL) is one of the earliest brain regions impacted by Alzheimer’s disease. In a recent study, Dr. Neha Sinha and colleagues in the laboratory Dr. Mark Gluck show that exercise exerts a rehabilitative and protective effect on MTL function, resulting in networks that are more flexible and able to reconfigure in response to memory demands. These more flexible networks may underlie exercise-induced improvements on cognitive measures of generalization, which are sensitive to subtle changes in MTL function.

The essential role of acetylcholine in the striatum

The chemical messenger acetylcholine (ACh) is found throughout the brain, and one region where it is particularly important is the striatum, a part of the basal ganglia implicated in neurological disorders like Parkinson’s disease, dystonia, and Tourette syndrome.  The laboratory of Dr. James Tepper studies the microcircuitry and function of striatal neurons, and in a recent study by PhD candidate Samet Kocaturk, they perform a comprehensive circuit analysis aimed at understanding how ACh-containing interneurons (CINs) contribute to striatal function. Using a combination of pharmacological, optogenetic, and neural recording approaches, they show that CIN activation recruits an intricate dual mechanism involving both pre- and postsynaptic ACh receptors on four distinct populations of striatal interneurons.

Salient or emotional events produce strong memories. This depends in part on the amygdala, a brain region interconnected with other areas that support memory storage. Following a memorable experience, the amygdala exhibits rhythmic activity in the gamma frequency range (>40 Hz), which predicts the strength of subsequent memory. To test the importance of gamma, Dr. Drew Headley and colleagues developed a method to enhance or suppress gamma by tracking it in real-time and delivering stimulation during its rhythmic peaks or troughs. For the memory task, rats learned the location of a hidden cache of food, received one hour of stimulation, and then had their memory tested. They found that trough stimulation enhanced gamma and improved memory for the food location, while peak stimulation had the opposite effect. Dr. Headley is now adapting the technique to motor cortex with the goal of improving limb control following a stroke.