We live in a time of multiple and compounding disruptions- a pandemic triggers an economic collapse, limiting readiness for response to both natural and design disasters; modest levels of sea level rise and tides can be driven to coastal flooding levels by high winds.[1]

New Jersey is buffeted frequently by such disruptions. For severe weather alone, from 1996 – 2019, the state was hit with 20,805 events recorded in the National Oceanic and Atmospheric Administration (NOAA) Severe Weather Data Inventory, averaging 867 per year, 72 per month, 17 per week, between 2 and 3 per day. 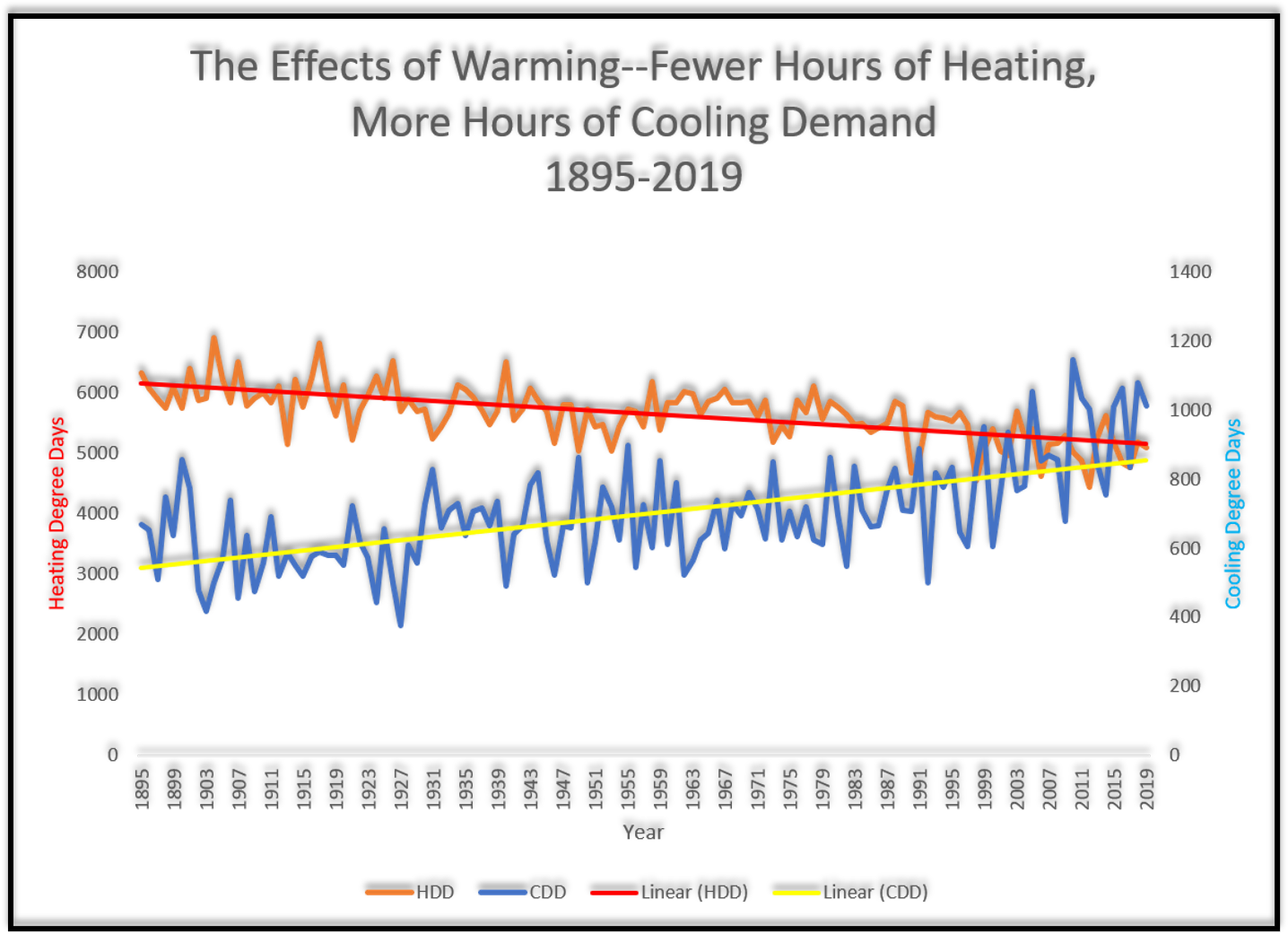 In peak years, such as 2002, 2007, 2011, and 2014 those numbers were 20 percent higher.[2] Aggregating these 48 types of severe weather into five principle categories is instructive: 32 percent were high wind events ranging from thunderstorm winds to tropical storms; 23 percent were cold weather events from blizzards to ice storms; 22 percent were wet weather events such as heavy (wind-driven) rain to flash floods to hail; 15 percent were heat and related events including wildfires, excessive heat, drought & lightning; and 7 percent were marine coastal and sea level events, respectively. The NJ Office of State Climatologist collects data on underlying long-term climate change indicators such as temperatures and precipitation going back to 1895, and synthesizes some of these into data useful in relating such indicators to such matters as the need for heating or air conditioning through the use of Heating Degree Days and Cooling Degree Days, each constructed with respect to a reference temperature of 65 degrees Fahrenheit . The trend there is clearly a reduction in the demand for heat during traditional heating seasons, and an increase in the demand for cooling during the warm weather seasons. It’s getting hotter and wetter and this 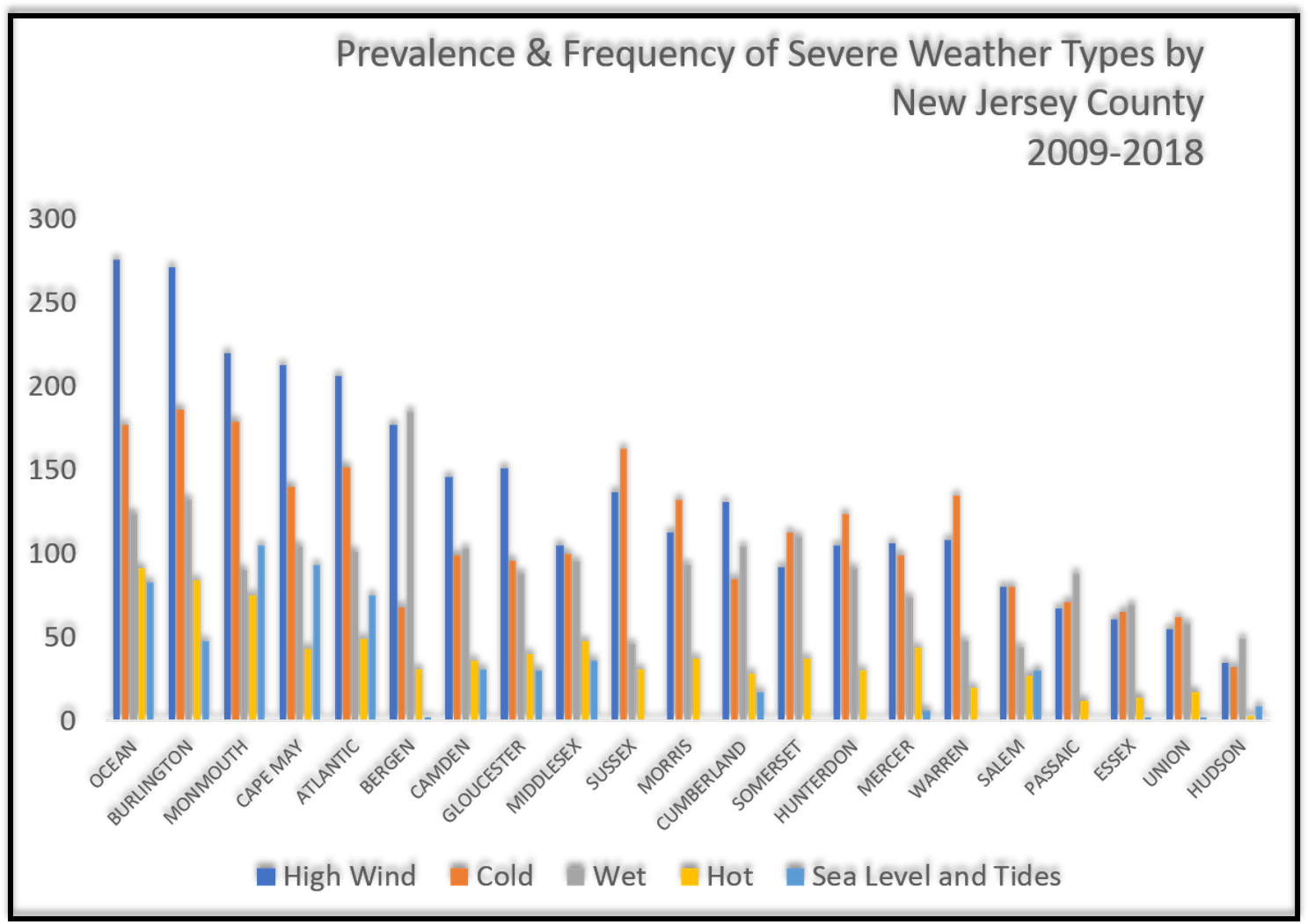 While these data are important inputs to longer range predictions of likely climate conditions at various greenhouse gas concentration pathways by mid-century and end-of-century milestones, resilience requires real-time consideration of both historical and current conditions including these episodic and increasingly frequent severe weather events. Our first hypothesis is that given a dashboard of such history, both event-based and trends-based, communities are more likely to commit to effective adaptation. While the example given is for natural disaster resilience, similar observations can be made about the increased frequency and intensity of economic disruptions and regarding exposure to health risks too. A trial test of this hypothesis will be conducted with stakeholders from Newark’s Central Ward and from the Turtle Clan of the Munsee Lunaape Native American Indian tribe in northern New Jersey and used to design and calibrate strategy for climate change readiness. 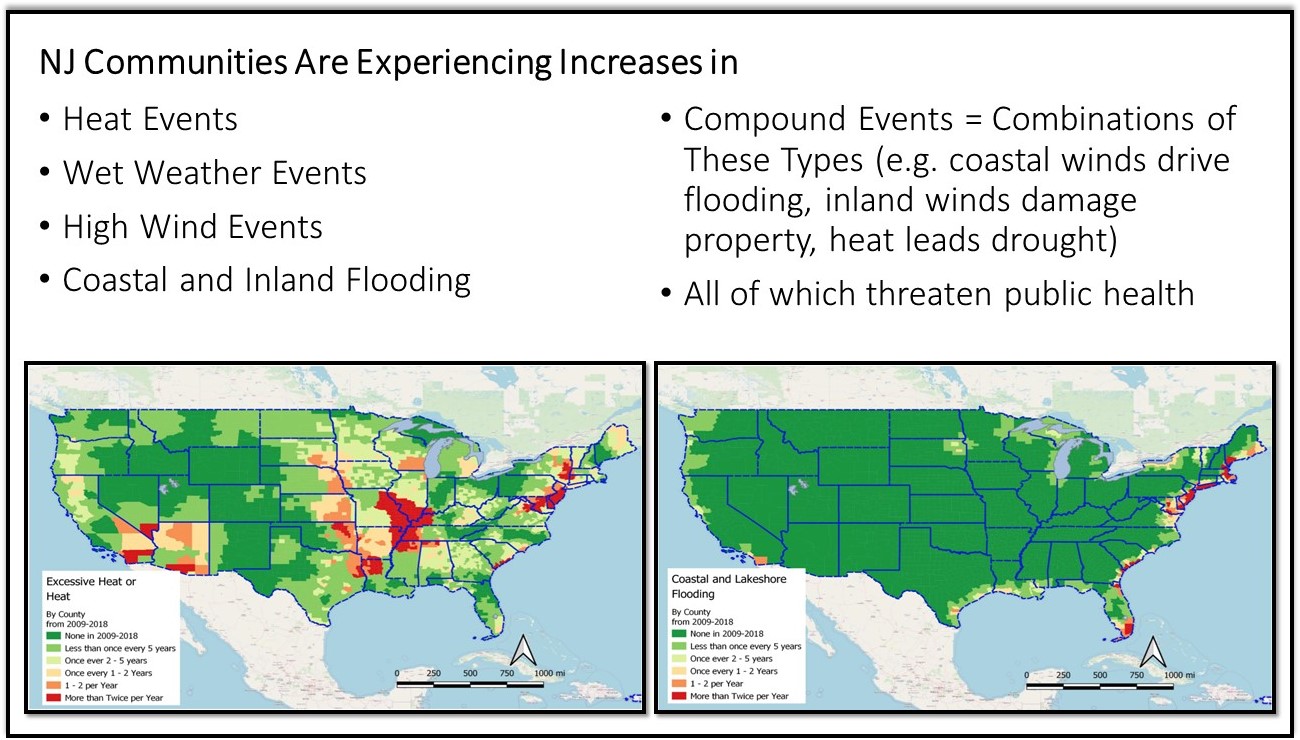 Planning for resilience and effective adaptation cannot be optimally conducted by government alone. Most property at risk, for example, roughly two-thirds of property in metropolitan regions and their communities is under private not public ownership, effective actions take coordinated and aligned actions without respect to ownership, and current statutory barriers exist to investing public funds on private property in most jurisdictions. Current technological choices for infrastructure have favored homogenous systems which lock in choices for up to a century, for example for stormwater collection and treatment, leaving potentially cost-effective surface permeability strategies without dedicated funding and appearing non-cost-effective. The trends in innovative public realm technologies and infrastructure is clearly toward more demand reduction, resource efficiency, and distributed technologies, allowing for a more context-sensitive, locally determined and place-based set of options. Rarely if ever are citizens and stakeholders afforded a clear view of such choices. Our second hypothesis is that given a fuller portfolio of potentially effective choices, a more beneficial set of actions will be selected, partly because of the potential localization of interventions chosen, and partly because of a richer range of co-benefits that exist with community-scaled adaptation.

Our ambition is to identify a set of roles that communities can play in partnership with research, development and services delivery organizations. Examples of prior successful efforts range from community policing, described as the co-production of justice outcomes from the collective efficacy of a fair division of labor between communities and police; the provision of affordable housing and community economic development in partnerships between community-based organizations, cities, states and lenders; and so-called one-stop shops for large scale retrofitting of homes and buildings to achieve energy efficiency and clean energy goals, among other endeavors, in partnerships between energy utilities, local governments, philanthropic organizations and communities. Each of these and others have grown to significant scale, and each involved a transformation of research, development and services delivery in the direction of distributed and “right-sized” activity at community scale.[3]

That ambition applied to the resilience proposition is being informally tested today in northern New Jersey communities ranging from Newark, where community based citizen science[4] and geographic information systems accelerated commitments to lead service line replacement in the aging water system, to the Ramapo Mountains communities of Ringwood and Mahwah, improving the impact of citizen engagement in Superfund cleanup oversight and allowing startup of essential food industries and systems, to Elizabeth NJ where community partnerships enable strategic targeting of flood-preventing green infrastructure where it will do the most good.

In a sense, this is a learning by doing, participant observation method of engagement leading to action. Historically, the science of weather forecasting needed simple analog signals that could be aggregated into advice for decision support at many levels, often adapting technology created for other purposes (e.g lighthouses, astrolabes, portable clocks and compasses created for marine navigation provided input that could be shared by telegraphs created to harmonize time zones and align service economies). The project we envision will create a dashboard of critical information needed to acknowledge the risk of disruption and to program appropriate resources toward the nature of that risk, and will democratize the production of the indicators to populate that dashboard, translate, using vernacular communications and creative visualization tools, risks into early warning signs to support better, accelerated, prospective and real-time decisions resulting in necessary community protections and collective capacities. By carefully documenting both the process and the outcomes of our deliberations, and including communities within a distinct bio-region that range from high density urban to low-density suburban and rural, we will provide valuable knowledge about how to calibrate such approaches across communities of differing scales within a region; and by including both traditional place-based organizations and a dispersed yet coherent Native Americansas partners, we will create an enriched knowledge set to aid in furthering such capacity in our target region and beyond. That capacity is a form of navigation in a changing set of circumstances, and we believe our commitment to shared responsibility for design, testing and execution of a strategy will provide superior results for communities in the face of disruptive natural, built environment, economic and public health challenges.

[2] NOAA/NWS Severe Weather Data Inventory, downloaded and analyzed by Scott Bernstein and James Debettencourt PhD, mapping by Peter Haas PhD at the Center for Neighborhood Technology, for the Price Institute July 2020. One conservatism in those numbers is marine event types, many of which were only added to this detailed tabulation starting in 2006 (check); another is a stated presumption that property damage from flooding events are only insured by the National Flood Insurance Program, which is not true in urbanized areas, and example of a presumption that can be corrected by augmenting these data sets with community-based, “hyperlocal” data.

[4] This includes in-area based systems such as the Community Collaborative Rain, Hail and Snow Network, or CoCoRaHS, the the Citizen Weather Observer Program, and the Significant Weather Observing Program, each of which add nationally thousands of observation points to the formal NOAA and National Weather Service monitoring systems.  Both NSF and NOAA provide significant support for these networks.