Writing a Love Story at Rutgers-Newark 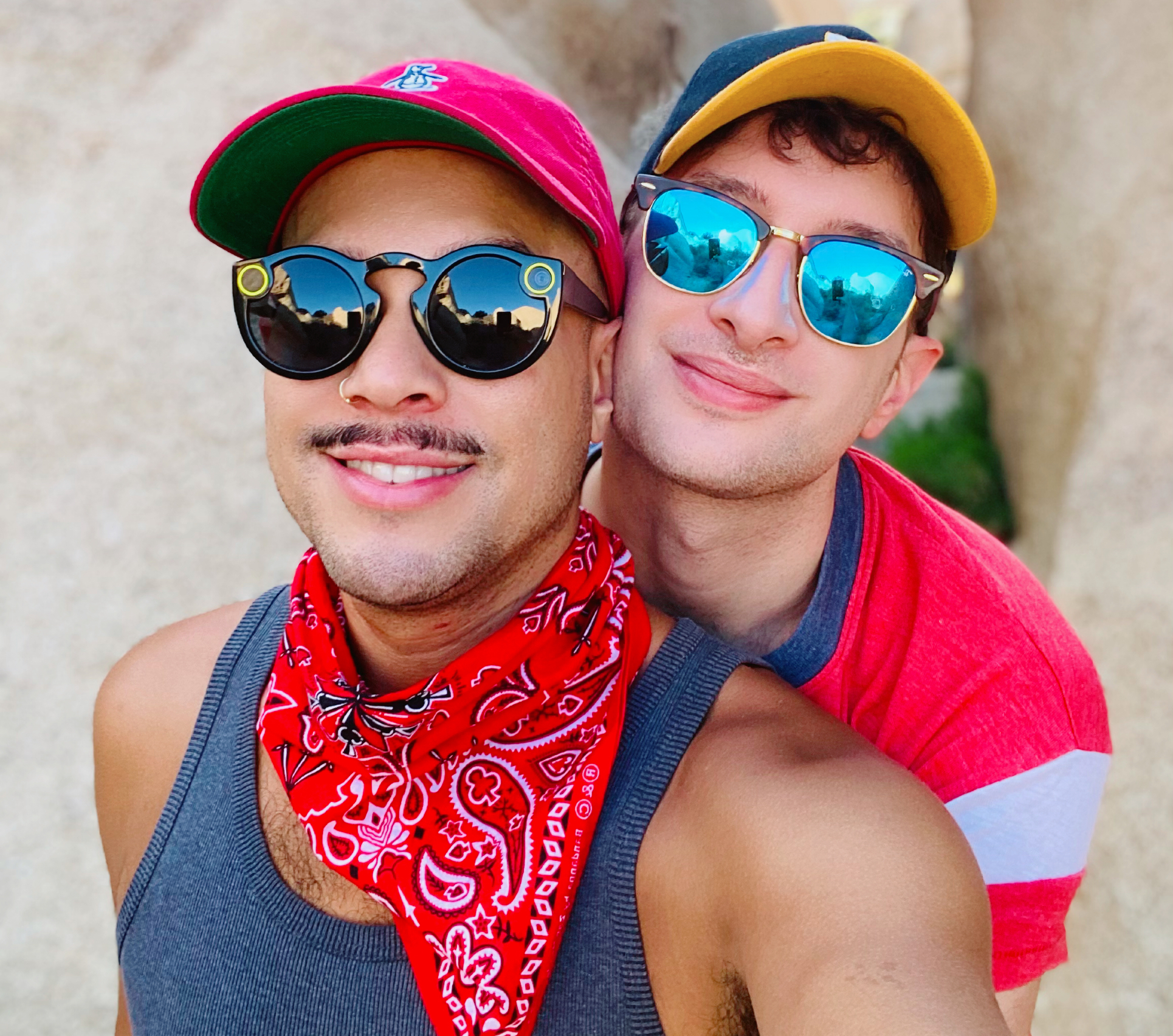 When Roberto F. Santiago (MFA, ‘12) met Mark Labowskie (MFA, ‘13) for the first time, he was immediately intrigued. “I was just so interested in everything he was saying, but I didn’t really know why.”

Labowskie’s first recollection of Santiago is a bit different. “We were all walking back to Newark Penn Station and there was this guy talking about how he’d just moved into a new place in Harlem, and how it was so great to finally be living in the ‘real’ New York.” He laughs. “I was living in Brooklyn, and I was very offended by that.” He adds, “It was bickering at first sight. Which is a kind of precursor to love sometimes.”

While the two were studying different tracks in the program – Santiago’s concentration was poetry and Labowskie’s fiction – they both taught undergraduate classes and had offices near each other. Santiago also had the opportunity to introduce Labowskie during several of the student readings. “I love doing that because when I’m introducing somebody, I try to make it about our relationship and showing the reasons I really love them.” He said he used those intros as opportunities to flirt, adding that in one of them he jokingly referred to themselves as the “Beyoncé and Jay-Z" of the Rutgers-Newark MFA program.

The two became fast friends, and it soon became obvious there was an attraction, but they didn’t officially start dating until both had finished the program. Santiago graduated in 2012 but kept in contact with the group and continued to attend MFA readings and events regularly. When Labowskie was ready to complete the program in 2013, he wasn’t planning to walk in the official graduation, but Santiago convinced him it would be a good idea. It was so last-minute that he had to borrow Santiago’s cap and gown. Santiago took the day off work to be in the audience, as did Labowskie’s mom, who drove up from Philadelphia. He introduced Santiago to his mom as a friend. “Roberto had never met her before,” said Labowskie, “This is before we were ‘dating,’ and he spent hours sitting next to her in these bleachers during the ceremony. And then we went out to dinner afterward, and we officially got together not long after that.”

Labowskie turns to Santiago. “I don’t think my mom really believed you were my friend. Even then.”

“I felt that she was like ‘oh you’re that kind of friend,’” says Santiago.

Both have fond memories of their time in the program. Santiago credits Rigoberto González , professor and director of the MFA program, and former fiction professor Tayari Jones with bringing him to Rutgers. The two were in the audience at a performance at the Bronx Academy of Arts and Dance, where he was reading, and suggested he apply. “I felt like they saw something in me in that moment,” he recalls. "I had already been applying to other schools, but there’s something about that one-on-one touch - them being willing to say 'you specifically, you should be a part of this' and I feel like that was something that continued throughout the program.”

After graduation, the two continued to live and work in New York. In 2014, Labowskie got an email saying he’d won the prestigious Wallace Stegner Fellowship from Stanford University, which would require him to relocate to California for two years. “Roberto was at work, and I went out and I bought champagne – I thought it was champagne, I was so frazzled, I actually just bought cheap white wine that had no carbonation. And then I told Roberto the news. Then that night I just asked him, 'Do you want to move to California with me?’"

Santiago replies, “I knew the answer was going to be yes but for a split second I thought, ‘what if I didn’t go?’ And it made me too sad to think about.”

The couple have been living in the Bay Area since, first in Oakland and more recently in San Francisco. Labowskie continued at Stanford as a Jones Lecturer once his fellowship tenure ended, where he teaches fiction workshops and courses on screenwriting and queer literature.

Santiago completed a Masters in Social Work at UC Berkeley. He had already been working with students on college access issues and felt the MSW would prepare him to be a better advocate. “A lot of the students that I was working with were first gen, low income, students of color, some of them were undocumented, and a lot of them were queer. I wanted to do more for them.”

They have also continued their writing pursuits. Santiago’s second collection of poetry, Like Sugar, will be published by Nomadic Press later this year. In June 2020, he was named editor-in-chief of Sancocho Press, which highlights the work of queer and trans AfroLatinx writers. He also put out a debut album, Bu$$yCat, which is available on all major streaming platforms.

Labowskie is nearing completion on a short story collection, and in the beginning stages of writing a novel. He is also the host and curator of the Stanford Storytelling Project podcast Off the Page, which spotlights the work of Stanford writers.

They both say they found a very welcoming home in the Bay Area’s writing community from the start, but they sometimes miss their time in the program, particularly the afterhours gatherings at McGovern’s Tavern, just off campus. “The conversations that we would have together as a cohort or across genre made it feel like you really were a part of a community there,” said Santiago.

“Something I really loved about the program at Rutgers was it felt very tightly knit,” adds Labowskie.

The cohort has continued to stay in touch over the years, working on joint projects and performing readings together and visiting each other on both coasts.

Santiago and Labowskie were engaged July 2019.

The two have some advice for anyone in a creative writing program. “Ideally in a program you need to have this balance between being receptive to feedback while also being true to yourself,” says Labowskie. “You need to have a little bit of that confidence in your work and yourself, but you also need the humility to know when people are making really valid points.”

“I wish I took myself a lot less seriously, but I also knew how to be my own biggest fan,” adds Santiago.

Antonio de Jesús Lopez: At the Intersection of Poetry and Politics