The grant will fund Phase III of the Garden State Louis Stokes Alliance for Minority Participation (GS-LSAMP) from March 2019 through February 2024.

Eight years into the program, GS-LSAMP has increased its number of underrepresented minority graduates in STEM majors by 167 percent, and initiated a Cross Campus Peer Mentoring program in which minority transfer students from 4-year colleges mentor minority STEM students from community colleges to encourage a higher transfer rate, which was 97 percent compared with the national average of 33 percent.

“It is wonderful to continue to be able to support our deserving students both academically and financially, and it is truly an honor to have the National Science Foundation hold the Garden State LSAMP in such high regard,” says Distinguished Service Professor Alec Gates, of the Department of Earth and Environmental Sciences, who directs the program.

Four additional community colleges are closely affiliated with GS-LSAMP through the Northern New Jersey Bridges to Baccalaureat Program, which creates a pipeline for STEM students to make seamless transitions to 4-year colleges. More than 3,000 students are participating in GS-LSAMP statewide. About 150 of those are from RU-N.

Effective interventions like the GS-LSAMP are absolutely critical to ensure that we progress toward realizing the American ideal.

This latest NSF grant comes on the heels of proven success during Phase II, when GS-LSAMP was named a Bright Spot in Hispanic Education by The White House and received the Trailblazer in Equity Award from the New Jersey Secretary of Higher Education.

Gates says that additional grants that collaborated with GS-LSAMP have totaled about $24 million.

The Phase III grant offers an opportunity for even more growth and innovation. To that end, Gates has added a research component to the mix by inviting RU-N Psychology Professor Luis Rivera to study how and why GS-LSAMP’s methods work, looking mostly at the impact of peer and faculty mentors on the engagement and success of underrepresented minority students in STEM, and how this can be refined and disseminated to a national and international audience. Once he’s completed his study, Rivera will publish his findings in academic journals.

“I’ve been so impressed by the GS-LSAMP alliance’s successes. Through our research, we’ll get a greater understanding of what STEM education practices work, for whom, and under what conditions,” says Rivera.

In addition, LSAMP, which is a national NSF-funded initiative with alliances like GS-LSAMP in regions across the country, recently welcomed seven new alliances of colleges and universities. Due to GS-LSAMP’s success, the NSF asked Gates to train leaders of some of these new alliances in best practices to ensure they get off to a solid start. Gates also serves on the board of the Louis Stokes Midwest Center of Excellence as a result of the Garden State program’s track record.

“The best practices for encouraging success of underrepresented minority students in STEM, developed by the Garden State LSAMP, will now be disseminated nationally, benefitting these students in STEM throughout the U.S.,” says Gates. 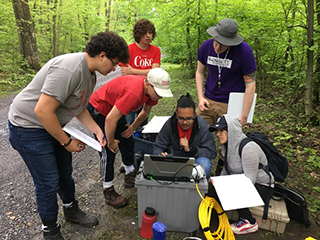 LSAMP is a national initiative to recruit, mentor and support under-represented minority college students in pursuit of careers in STEM fields. Between 1992 and 2017, the initiative has helped produce more than 650,000 baccalaureate degrees at LSAMP institutions in STEM fields for underrepresented minority students, according to NSF LSAMP Program Director A. James Hicks. Currently more than 250,000 students per year participate through 52 alliances involving some 600 campuses.

LSAMP, which was previously known as the Alliance for Minority Participation, was renamed in 1999 to honor civil rights activist Louis Stokes, the first African-American congressman from Ohio. Stokes founded the Congressional Black Caucus Health Braintrust and had been an advocate for health care and public health issues before his death in 2015.

Denis Paré, Acting Dean of the School of Arts & Sciences-Newark (SASN) and Director of RU-N’s Center for Molecular & Behavioral Neuroscience, stresses the importance of GS-LSAMP’s work, situating it within the wider context of American democracy.

“African Americans, Latinx, and American Indians/Alaska Natives constitute approximately 33% of the U.S. population but only between 9% and 21% of bachelors degrees in STEM, depending on the specific field. This imbalance is one of the main factors that fuel racial inequalities in the U.S.,” says Paré. “Effective interventions like the GS-LSAMP are absolutely critical to ensure that we progress toward realizing the American ideal. RU-N’s School of Arts and Sciences is grateful to the National Science Foundation for allowing Alec Gates to continue his visionary work.”