The Academy of American Poets has awarded its 2020 Harold Morton Landon Translation Award to I Even Regret Night: Holi Songs of Demerara, Guyanese-American poet Rajiv Mohabir's translation into English of a 1915 songbook by an Indian indentured immigrant in British Guiana, which was excavated from the dustbin of history and passed on to him by Rutgers University–Newark Assistant Professor of Journalism Gaiutra Bahadur.

“It’s so powerful and meaningful that a work that was lost to history and even to the family members of its indentured author not only gets recovered from obscurity but gets recognized by the Academy of American Poets,” said Bahadur. “It's a huge honor for the translator and for the book itself.”

The story of the lost text and its eventual resurrection is every bit as compelling as the award the English translation just received.

In June 2011 Bahadur was in the final stages of research for her 2013 book, Coolie Woman, a history indentured women in the Caribbean that also traces her great-grandmother’s exit from India in 1903 for a life of indentured servitude in British Guiana. As she pored over works on the subject, Bahadur came across a footnote in a monograph by a Delhi–based labor historian that referenced Lalbihari Sharma’s Holi Songs of Demerara, an early-20th century songbook authored by an indentured man about life on a sugar plantation in the same colony where her great-grandmother had served.

Bahadur could hardly believe her eyes.

First-person accounts by indentured immigrants in the British Empire are rare. Historians know of only three such texts: Sharma’s songbook, which is the only one from the English-speaking Caribbean, and two others by men indentured in Fiji and Suriname.

I felt strongly that these words should be out in the world in English, for the descendants of indenture and anyone else interested in their history.

Bahadur set out to find the text.

The British Library, where she had researched much of Coolie Woman, supposedly had one original copy of the pamphlet in its manuscript repository belonging to an administrative unit of the British Empire named the India Office. But when she checked that archive’s catalog, the copy was marked as lost. Deflated yet undaunted, Bahadur kept at it until an archivist found the text at one of the library’s off-site warehouses. The manuscript was in bad shape, however, too brittle to be photocopied. After a month Bahadur returned to the U.S. but kept cajoling the archivist, who scanned all 37 pages of the pamphlet, employing careful technique, and sent copies to Bahadur in violation of library rules.

“We are all in her debt,” Bahadur said. “Without her the translation would not exist.”

Holi Songs of Demerara is written in the Devanagari script, in a combination of Awadhi and Bhojpuri, which are the idioms of India’s northern regions where most indentured immigrants came from, and in Braj Bhasha, the literary language used by medieval saint-poets from India’s Hindu heartland.

Before even getting the manuscript to Mohabir, Bahadur cobbled together a preliminary English translation by working with three other people: She started with an elderly man in Trinidad who was a grandson of indentured immigrants from India, who translated out loud as Bahadur scribbled notes in his backyard. She then consulted with a female academic who had emigrated to the U.S. from India, who produced a translation Bahadur then used as a source for Coolie Woman. Finally, an Indian scholar of indenture helped Bahadur with some passages that had yet to be translated, and Bahadur used her own knowledge of Guyanese plantation terrain and vocabulary to clarify additional details. 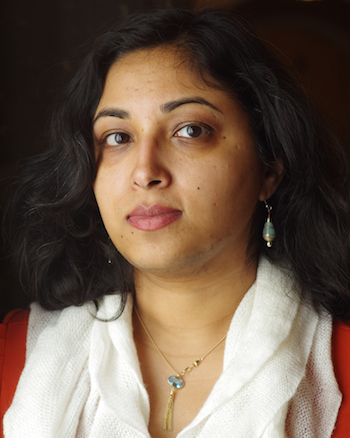 Bahadur then turned to Mohabir to produce a literary translation for final publication.

“I felt strongly that these words should be out in the world in English, for the descendants of indenture and anyone else interested in their history,” said Bahadur. “Rajiv’s skills and magic as a poet who quarrels with the muse of history made him the ideal custodian of this project. I also felt sure that he would do it justice, given his scholarly and artistic work with his own grandmother’s folk songs and his reverence for the oral tradition.”

Mohabir is the author of The Cowherd’s Son (2017), which won the 2015 Kundiman Prize and the Eric Hoffer Honorable Mention in 2018, and The Taxidermist’s Cut (2016), which took home the Four Way Books Intro to Poetry Prize and was a finalist for the Lambda Literary Award for Gay Poetry in 2017. His memoir, due out next year, won Reckless Books’ 2019 New Immigrant Writing Prize. He is an Assistant Professor of Poetry in the MFA program at Emerson College and the translations editor at Waxwing Journal.

The final product of this years-long journey, I Even Regret Night, was published by Kaya Press last year. Bahadur wrote the afterword to the translation, an essay titled, "Rescued from the Footnotes of History." The Harold Morton Translation Award given to Mohabir recognizes a published translation of poetry from any language into English that demonstrates literary excellence. That the project reaped such a reward is a testament to not only Mohabir’s excellent work but to Bahadur’s rigorous scholarship, stamina and perseverance.

“This songbook deserved a literary translation, and Rajiv gave us one of high elegance and sensitivity,” said Bahadur. “It’s heartening to see the songbook not only rescued from the footnotes of history but given a place in literary history with this award.”

Chart a Course: Black Lives Matter and The Wire