Seniors 2018: Dayana Arrue Makes the Most of Her Short Time at RU-N

Dayana Arrue has always believed in the value of learning and hard work. Her parents, who emigrated to the U.S. from El Salvador, gave her and her siblings the strength and desire to pursue their education and taught Arrue that it was the best path to the life she wanted.

Now, many years later, she’s part of the first generation in their family to get a college degree, having graduated recently with a degree in geoscience engineering from Rutgers University–Newark.

Arrue came to the U.S. at age 6 and grew up in Newark, graduating from Science Park High School before heading to Essex County Community College (ECC), where she received an associate’s degree in Biology/Pre-Medicine.

While there, she a carried a 3.98 GPA as part of the Honors Program and received an Undergraduate Transfer Scholarship from the Jack Kent Cooke Foundation, awarded to only 80 U.S. students per year. At ECC, Arrue also fell in love with the sciences, doing undergraduate research off-campus in the Environmental & Sustainable Geochemistry lab run by RU-N Professor Ashaki Rouff.

I would stay in school forever if I could, simply learning and finding new things through research

She transferred to RU-N in 2015 to study geoscience engineering and was accepted by the Honors College. Her decision was not entirely a surprise, given her connection to the campus through Rouff. She had also worked with RU-N Professor Alec Gates in his summer geoscience program for Newark high-schoolers as a 10th-grader and had kept in touch with him. It was Gates who eventually recruited Arrue to RU-N.

Once here, Arrue continued her work with Rouff and her team as an undergraduate research assistant with the help of an SASN Dean's Undergraduate Summer Research Fellowship. She continued in the lab until 2017 and based her Honors College thesis on that work, even contributing as co-author on two published papers. She also has worked on her own paper for publication and is waiting for it to be finalized.

“Dr. Rouff and others took me onto their team and allowed me to explore the world of research,” says Arrue. “I’m so grateful for them believing in me and granting me the honor to work alongside them, and for the hard work Dr. Gates has put in helping minorities and city kids pursue STEM careers.”

Arrue has been busy outside class and the lab as well, co-founding and serving as events coordinator for the Association of Environmental and Engineering Geologists, the only student chapter in New Jersey, and working as a teacher’s assistant for her department’s Environmental Geology course. 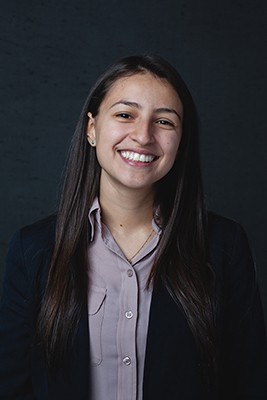 Arrue also has been doing the lecture circuit.

In 2015, she presented her research at the Geological Society of America national conference. She’s been a student speaker at Science Park High School, where she’s discussed her academic journey and promoted the Jack Kent Cooke Foundation as a student ambassador. And she’s even been spotted at Rutgers Day, giving demonstrations to kids about research and science.

After graduating from RU-N, Arrue will start a full-time job as an engineer for an environmental firm. At some point, she hopes to return to school for a master’s degree or Ph.D. in remediation/water engineering.

“I would stay in school forever if I could, simply learning and finding new things through research,” Arrue says. “This passion for learning is contagious, and it was passed on to me by very special people at ECC and Rutgers-Newark who have been there for me since the beginning.”