Biologists Unravel the Evolutionary History of Termites and Cockroaches

Three Rutgers University-Newark (RU-N) scientists are using next-generation genome sequencing and big-data analytics to unravel the mysteries of termite and cockroach evolution, increasing our understanding of these important insects and the drivers of biodiversity.

Cockroach expert Dominic Evangelista has been collaborating with his former Ph.D. advisor, Jessica Ware, professor in the department of Biological Sciences, current PhD student Manpreet Kohli, and others on a multiyear project to map the evolutionary history of a group called Blattodea, which includes both termites and their cockroach ancestors.

Using by far the largest dataset to date, the team was able to construct an evolutionary tree that corroborates decades-long suspicions that termites evolved from cockroaches. Their DNA-based analysis, combined with one of the most extensive revisions of the fossil record, showed that many termite and fossil groups are much younger than scientists had previously thought.

Their findings were recently published in the journal Proceedings of the Royal Society B: Biological Sciences, one of several journals of The Royal Society, in London, which celebrated its 350th anniversary in 2010.

“We used to think termites were different from cockroaches, but our large dataset enabled us to see they have a common ancestor that is a cockroach,” says Ware. “So, termites turn out to be the family member who has really different characteristics than the rest.”

Unraveling the evolution of insects is essential for understanding how life in terrestrial and fresh-water environments evolved. And getting such large datasets is no small feat. Evolutionary biologists have been expanding their genomic datasets as DNA-sequencing technology and computing power have improved, although there are challenges, not the least of which is cost.

This study represents a big leap, say Evangelista and Ware, whose research group sequenced transcriptomes— the entirety of an organism’s expressed genes—of 65 species. The entire data set containing 1.2 million nucleotides—the basic structural units of RNA and DNA—is 100 times larger than that of the last similar study, the pair says, which was crucial to constructing a meaningful evolutionary tree.

Dominic is transforming what we know about the ancient evolutionary history of cockroaches.

Normally, DNA sequencing on this scale would be cost-prohibitive, despite the available technology. But Evangelista and Ware are part of an international scientific consortium called 1KITE (1KITE.org), which stands for 1K Insect Transcriptome Evolution. The project has brought together recognized experts in molecular biology, morphology, paleontology, embryology, bioinformatics and scientific computing to study the transcriptomes of more than 1,000 insect species to create robust phylogenic trees.

One of 1KITE’s founders, an entomologist named Xin Zhou, went to graduate school with Ware at Rutgers–New Brunswick and returned to his native China to teach at a university. He also worked for Beijing Genomic Institute (BGI), a for-profit company in Shenzhen, China, that bills itself as the world's leader in gene-sequencing services. BGI did the sequencing for the team’s cockroach study in exchange for authorship and collaboration on Evangelista and Ware’s latest paper.

“BGI provided the foundational data for this paper and gave a starting point to continue exploring these issues and start new initiatives,” says Evangelista. “Their contribution was huge.”

The team’s findings represent one of the latest significant contributions in the field of evolutionary biology.

In addition to showing that termites evolved from cockroaches, Evangelista and Ware infer that the closest cockroach ancestor of termites had eggs that were vulnerable to predators. When they started living inside wood, it provided them needed protection for their eggs.

“Cockroaches lost ability to protect their eggs, and moving into wood gave it back to them,” says Ware.

And by combining their huge genetic dataset with a large morphological dataset of fossils, the team found that cockroaches and termites are much younger than most scientists previously thought.

“Colloquially, everyone says they’re ancient because they’re so hard to kill,” says Ware, “but this misconception originates from a misinterpretation of the fossil record prevalent in the early 1900s.” 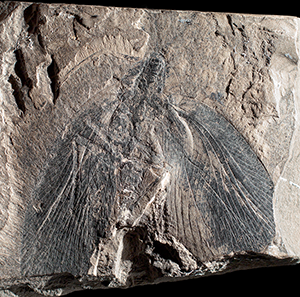 In demonstrating this, the team brings the fossil records and their estimated origin dates closer together. This is a shot against the creationist deniers of evolution, according to Ware.

Evangelista and Ware’s partnership goes back quite nearly a decade.

The former worked in Ware’s lab for six years while a graduate student at RU-N. As he was finishing his Ph.D. in 2016, Evangelista was awarded a two-year NSF Post-Doc Research Fellowship to work with a team at France’s National Museum of Natural History, in Paris, who are mapping the evolution of cockroach species never before studied using genomic data. The current Royal Society paper partially emerged from that work.

While Ware focuses mostly on dragonflies and termites, she describes Evangelista as one of the world’s leading experts on the evolution of cockroaches.

“Before Dominic’s post-doctoral work, there was almost no one working on cockroach genomics, and certainly no one combining traditional morphology with DNA and other cutting-edge methods,” says Ware. “The vast majority work on pest-management and applied entomology, but Dominic is transforming what we know about the ancient evolutionary history of cockroaches.”