It’s no secret that as the country attempts to tackle the related problems of global warming and food security, many cities have been creating green spaces for urban farming, and Newark is no exception. In 2004, it started an Adopt-A-Lot program, which encourages residents, businesses, block associations and nonprofits to create green gardens in city-owned vacant lots. In 2013, a coalition of experts, city agencies and organizations formed Newark DIG (which stands for Doing Infrastructure Green) to find environmentally friendly ways to manage water runoff, which overloads the city’s aging sewer system and contributes to pollution in nearby waterways. Among their many initiatives, Newark DIG has helped residents, businesses and urban gardens set up rainwater harvesting systems to capture and reuse rainwater to lighten the load on that system.

As an anchor institution, Rutgers University–Newark is involved in numerous efforts to help lessen Newark’s carbon footprint while creating a safer, healthier environment for city residents. Associate Professor Ashaki Rouff and Ph.D. candidate Omanjana Goswami, of the Earth & Environmental Sciences department, have been helping out by working with community-garden managers throughout the city to test their soil for lead contamination.

Recently, Goswami authored a paper with Rouff, detailing their findings in Soil Systems journal. We sat down with them to discuss their research, the city’s urban-farming scene, and common-sense precautions to take when handling soil in urban areas such as Newark.

Can you tell us a little about urban farming in Newark?
Omanjana Goswami: Urban farming in post-industrial cities like Newark is a rapidly growing practice. Newark’s sustainability office has initiatives like the Adopt-a lot-program, which lets people rent vacant city-owned lots for $1. Pre-Covid there were an estimated 100 operational community farms in Newark—with six or seven large ones—and a few of them also sell produce commercially. Community farms enhance access to healthy produce, improve neighborhood aesthetics, revitalize vacant or abandoned land, and have an overall positive impact on the quality of life. They also provide recreational and educational spaces. 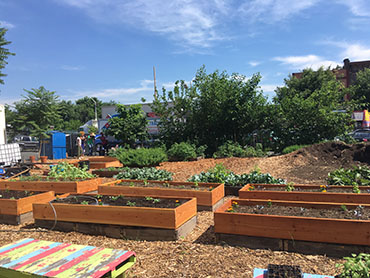 You mention in your research abstract that exposure to environmental lead through farming in urban soils is often overlooked. Why is that?
OG: Household exposure to lead, especially through drinking water, dust or deteriorating paint, gets a lot more attention because the scale of exposure is much greater. And narratives in the media have focused a lot more on lead exposure from drinking water—and rightfully so—especially since Flint, Mich. Moreover, the urban-farming community, and the number of residents involved in farming practices, is still very small.

Ashaki Rouff: We can also answer this from a scientific angle. For instance, the form that the lead is in is also important. Lead in water is already dissolved in a solution, and since important reactions take place within fluids in our bodies, the lead moves around more readily in that form and does great harm. Lead in soil, on the other hand, is bound chemically to various minerals like calcium and manganese, what we call “species,” and how the lead is attached to these mineral species determines the contaminant level. Some minerals are stable for tens of hundreds of years, which means the lead is stabilized long-term—you’d need drastic changes in the soil structure for the metal to be detached and released from these species. So, there’s a range of forms of lead in soil, and are all not behaving equally. This is why the government specifies a 15ppb (parts per billion) limit of lead in water versus a 400ppm (parts per million) limit in soil. Lead becomes dangerous to humans at a much lower threshold in water.

The pathway into our bodies is also important, correct?
AR: Yes. We ingest lead in water, but we usually inhale lead from soil—from particles that are kicked up—or we can ingest it, or it can enter through our skin. We also drink a lot more water than we interact with soil, and in water the lead is “ready to go.”

Lead in produce is not a concern. We’re more concerned about lead exposure through ingestion, inhalation and skin exposure when working and playing in native soil away from the raised beds.

Is it true that your research into lead in Newark’s urban-garden soils happened by accident?
AR: That’s right. We were working on another project with local dairy and livestock farms and Rutgers Cooperative Extension, recovering nutrients from different forms of animal waste to use as fertilizer. When we introduced our initiative to managers at community gardens in Newark, we learned of their concerns working in an urban environment, including soil contamination. They wanted to know more about the current state of their soils, and we had the capacity to offer that at no cost. So, that’s how our research started, and it was supported by a Rutgers-Newark Chancellor’s SEED Grant, which in turn helped us get a National Science Foundation supplemental grant. Rutgers-Newark's anchor-institution mission is really what made this all possible. Having that support was crucial.

Tell us about your study.
OG: We collected samples from a total of seven gardens across four of the city’s wards, starting in summer 2016, then on into summer 2017 and 2018. Our goal was to understand the amount and distribution of lead both within and across these sites, and whether there were certain soil-sample categories that contained more lead than others. Categories included soil from raised beds, compost, native soil, and non-growing areas adjacent to parking lots, garden fences or buildings, where benches are often placed.

AR: That’s an important point. The soil was categorized the same way across all the farms we studied, because that’s a good way to tie the separate gardens together to say something collectively about farming practices such as creating raised beds to grow produce in, which yielded the lowest contamination across the farms, or the practice of leaving soils alone, which was also impactful because they had the highest soil contamination. You learn a lot when you categorize soil samples consistently across locations. 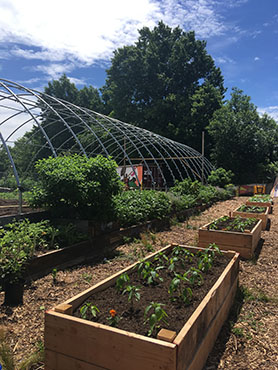 What were some of your takeaways?
OG: Soil that contained elevated lead in our study were those categories which had known inputs from human activities, like soil next to a house that had lead-based paint, or from soil adjacent to a parking lot that had gasoline run-off. This is a common finding with lead distribution in urban areas. And managers design their gardens and create farming practices around the contaminants in their soils. For instance, food is grown in raised beds using commercially purchased topsoil that is meticulously maintained. So, lead in produce is not a concern. We’re more concerned about lead exposure through ingestion, inhalation and skin exposure when working and playing in native soil away from the raised beds. So, we suggest caution while physically handling this soil, using gloves or a mask when possible, washing hands after working, and keeping an eye on children playing in the gardens.

AR: Putting up signage at the gardens is key as well, and most of the gardeners have done orientations and are made aware of issues to minimize everyone’s exposure. In addition, a lot of the non-growing areas are covered by woodchips or a clay cap to form a protective barrier over this soil. Our main goal in the end is to raise awareness of the issue of lead in Newark’s urban-farming soils, which we’re continuing to do.

This has been really informative. Thank you very much for sitting down with us.
OG: Thank you.
AR: Thanks for your interest in our research and getting the word out there.