Rutgers University–Newark has received its first-ever grant to support underrepresented minority college graduates in pursuit of science, technology, engineering and math (STEM) Ph.D. degrees as part of its Bridges to Doctorate program.

The $1 million award came courtesy of the National Science Foundation (NSF), which funds the Garden State–Louis Stokes Alliance for Minority Participation (GS-LSAMP) initiative, of which Bridges to Doctorate is a part. Since 2009, GS-LSAMP has enabled thousands of underrepresented minority students to pursue undergraduate STEM degrees at Rutgers University–Newark and other New Jersey schools. A decade later, RU-N is looking forward to extending similar support to graduate students in STEM fields.

“Fifteen years ago, NSF started Bridges to Doctorate as part of LSAMP, and while the latter gets underrepresented minority students into STEM, the ultimate goal was to get more graduate degrees among these students,” says Professor Alec Gates, who is Executive Director of GS-LSAMP. “This grant to establish Bridges to Doctorate at RU-N will be a real game-changer for our graduate programs.”

The award will cover a $32K annual stipend plus tuition over the first two years for a cohort of 12 graduate students arriving on campus in fall 2020 and will extend to science departments with STEM-related disciplines. Those departments will then commit to supporting these doctoral candidates during years three through five of their Ph.D. programs with fellowships, teaching assistantships and the like.

If we’re going to really change the culture in the U.S., we need underrepresented professors who can mentor the next generation. So, this is really exciting.

Gates has spoken to several department chairs, all of whom are excited by the prospect. He stresses that the national LSAMP program has about 220K undergraduates that RU-N can market the new initiative to.

“This will let us draw from a great nationwide applicant pool for STEM graduate programs at RU-N,” says Gates.

In addition to providing financial support, the Bridges to Doctorate initiative will designate incoming Ph.D. students as a cohort so they have a ready-made community and support network. Gates will develop professional development workshops for them as well: Topics will include dissertation writing and the post-doc application process. Gates also envisions the doctoral candidates mentoring LSAMP undergraduates by employing them as research assistants, giving talks at LSAMP conferences, and participating in the Newark STEAM Coalition. And he plans to have them meet with underrepresented minority STEM faculty members at other GS-LSAMP schools in New Jersey so they can see what’s out there for STEM Ph.D’s.

Over the last decade, GS-LSAMP has created a remarkable pipeline of underrepresented minority undergraduates in STEM majors throughout the state. To extend that to doctoral candidates means the world to Gates and his colleagues.

“We’ve benefited greatly from students from our LSAMP succeeding elsewhere in the Bridges to Doctorate program,” says Gates.  “To be able to get great students working together and changing the equation in our graduate school here is crucial. If we’re going to really change the culture in the U.S., we need underrepresented professors who can mentor the next generation. So, this is really exciting.” 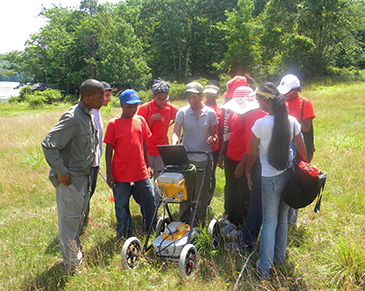 Between 1992 and 2017, NSF’s national LSAMP program has helped produce more than 650,000 baccalaureate degrees at LSAMP institutions. Currently more than 250,000 students per year participate through 52 alliances involving some 600 campuses.

NSF started the Bridges to Doctorate program in 2004 and has seen similar success, funding 10 schools per year initially, with smaller cohorts and dollar awards for each student. The program grew gradually to its current level of 14 schools annually, with cohorts of 12 students per campus, to the tune of $34K per student, totaling more than $14 million for the 2019–2021 cycle. Schools must be part of LSAMP for 10 years to be eligible for the Bridges to Doctorate program. This is the first year RU-N has been eligible.

“It’s really an important component of the larger LSAMP initiative,” says Gates, “one we’re very proud to now be a part of.”