Professor John Keene Keene is a man of many hats. He is the Chair of Rutgers University–Newark’s African American and African Studies department, and teaches in the English department and MFA Creative Writing Program. He’s an award-winning novelist and poet. And he’s a translator of Brazilian authors, as well as texts from Spanish and French.

In 2017 Keene was awarded the Rutgers Faculty Scholar-Teacher Award, given across all Rutgers' campuses to "honor tenured professors who make exceptional connections between their academic research and their teaching." And in 2018 he was awarded a coveted MacArthur "Genius" Fellowship.

This book brings together poems you’ve written throughout your career. How many decades exactly, and what inspired you to create such a sweeping collection?
It roughly encompasses about three decades of work, going back to my years in the Dark Room Collective in Cambridge and Boston, which I joined in 1989. I wrote a significant portion of the poems in the late 1990s, though, when I participated in the Cave Canem Writers Workshop, up through today. A few years ago, after a reading I gave in Brooklyn, one of the editors at The Song Cave asked me if the poems I read were in a collection, and I told him that some appeared in a chapbook but most were not, so that led me to gather together the poems, in seven sections, that constitute Punks. I wasn't sure it would work, but ultimately, I believe, it does.

What portion of these poems had been published? What's the breakdown between old and new work, and were the new poems written specifically for this volume or verses you'd written more recently and decided to include?
I'd say a sizable portion of the poems were published, sometimes in quite different form. I didn't write any new poems for this volume, but I did include some very recent poems, like "Pulse," and the "Postcard" poems, as well as the collaborative "Trees" poems, which I had never published anywhere. I should add that for every poem that appears in this collection there were a number that did not make it, but the collection is better for the selectivity, I think.

Poetry is foundational and essential, one of the most vital and invaluable literary genres we have, and a vital source of knowledge and possibility if we pay attention.

You’ve said Punks is like a “mixtape.” Would you unpack that for readers and tell us how it’s different from Seismosis and Annotations?
Both Annotations, which is called a novel (and it is) but can also be read as a long poem in prose, or a collection of lyric essays, or an experimental memoir, and Seismosis, an art-text collaboration with the artist and poet Christopher Stackhouse, are essentially carefully focused and structured projects; every part of those works, different as they are, aims towards the larger demands of the book's guiding aesthetics and concept. With Punks, like my story and novella collection Counternarratives, you have a range of poems, in an array of styles (very conventional, including sonnets, to very experimental), but the overarching theme and its internal architecture provide a foundation and coherence.

What was the editing process like with your publisher, how many iterations did the manuscript go through, and how long did it take to pull all of this together?
Working with The Song Cave editors on Punks was a pleasure. When we first spoke back in 2020, I was really unsure about how to proceed. The book perhaps could have appeared at the end of that pandemic year. By late 2020 and early 2021, I had a better sense of what to do with the collection, how to structure it, and sent it off the editors, Alan (Felsenthal) and Ben (Estes), both poets themselves, who responded very helpfully with both big picture and poem-by-poem suggestions. It came together very quickly. I am still astonished the book was printed and in bookstores by December 1, 2021.

Punks is broken down into seven sections, each starting with a quote from a different Black poet. Can you explain this structure to readers and discuss how you arrived at it, and the function that it serves?
Each of the collection's seven sections has a particular emphasis, and so I thought carefully about poets who had influenced me over the years, poets whose work had provided various kinds of insight and illumination. I also wanted to celebrate these writers, provide a tribute, so I selected quotes by a series of Black--and one Asian American--writers, most LGBTQ, from across the Diaspora, to open and provide a key for each section that followed them. Only one section, "Trees," does not have a preceding quote. 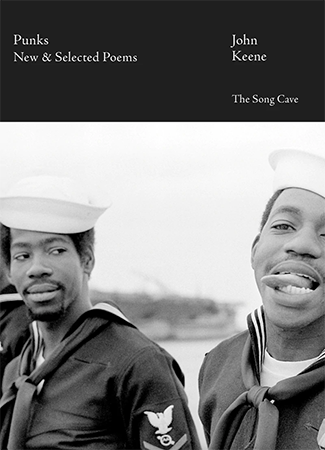 The section titled “Trees” is actually a collaboration with the now deceased poet Cynthia Gray. How did that come about, why was it important for you to do this, and what do you think the collaboration adds to this collection?
I love collaboration, and had written two collaborative poetry books before this one (Seismosis, with Christopher Stackhouse, and Grind, with photographer Nicholas Muellner), so I thought that it would be great to include this collaboration, with the late Cynthia Gray (Cindy Loehr). Back in 2012 or so, poets we knew in common suggested she invite me to collaborate, as part of her Collective Experience Writing Machine project, and though I was a bit overcommitted at the time (in part because I was heading to Rutgers-Newark), I agreed to do so. We did not know each other before this. Via email we would exchange poetic stubs, and develop them by sending our revisions back and forth until we settled on what we considered final. It was a lot of work but a lot of fun too, and the collaborative nature of the process pushed me beyond what I might have otherwise written. I have tried to honor that experience by not revising any of these poems, keeping them as they were when we decided they were set.

This collection highlights the many different styles you write in and continues your pattern of engaging with history and historical figures and voices. Do you reach for this amalgam of styles consciously, or does it just happen organically? And what ultimately is your intention, or purpose, in invoking these historical figures?
I believe the formal range happens organically. The subject matter and poetic forms gel at the same time, even if I proceed from just a word, or a line in my head, or an image, or a feeling. Often the correct form provides the only means for realizing and exploring that feeling and particular subject matter, as in the case of "Gift," say, or "How to Draw a Bunny." With the historical figures who appear, one of the things I was thinking about was opening the vista beyond my own personal experience, to suggest possible connections with prior figures, my own immediate ancestors, who appear in the "Manzanita" section, and various historical figures, in the "Dark to Themselves" section. What happens, I was wondering, when I put all of these figures in conversation, via juxtaposition and relation?

What does it mean personally and professionally to have this collection out in the world? Are you happy with the final product?
I am incredibly happy with it. For a while I thought many of these poems would not appear in book form in my lifetime, because I have always encountered challenges getting my work into print. The "ghost books" that preceded this book never made it onto shelves. I think the book looks beautiful and am so grateful that the publisher worked with late photographer Alvin Baltrop's estate to allow use of the cover photograph. Punks provides readers with a wide range of poems to read and enjoy, and offers many points of resonance. The response from readers and reviewers so far has been very positive, and it also has been a Small Press Distributors best-seller for three months (November through January) so far, so that also is very encouraging.

Final thoughts?
I urge everyone to pick up a book of poetry, whether this one or by any of my amazing Rutgers-Newark colleagues who write poetry, or by any of the innumerable, wonderful poets out there, and read. Listen to poems, whether set to music or not. Enter into the worlds poetry offers. Poetry is foundational and essential, one of the most vital and invaluable literary genres we have, and a vital source of knowledge and possibility if we pay attention. So I would say read poetry and share poems with others.