Rutgers University–Newark has occupied a distinct place in its home city’s history since its inception in 1946, providing access and opportunity to generations of students, many the first in their family to attend college. That history becomes complex, however, when accounting for community displacement that occurred to build a new campus in Newark’s Central Ward in the 1960s, and for the many well-documented events that followed in the late ’60s and ’70s.

After discovering a dearth of material on RU-N’s history and role in the Newark community, Associate Professor Eva Giloi, of RU-N’s History Department, decided that a deeper version of the story needed to be told. In October 2016, along with the Federated Department of History, John Cotton Dana Library, the Institute of Jazz Studies, and NJIT’s School of Architecture, she hosted a six-month exhibit in Dana Library titled, “Making a Place: Rutgers University–Newark as a Microcosm of 1960s America," a multi-sensory experience on the campus’ history and architecture featuring historic photos, oral histories, original architectural plans and music recordings from the 1960s and ’70s.

Together with others at RU-N, she used the exhibit as a springboard for an ambitious concept called Newark Rhythms, a three-year research, exhibition and music/visual arts performance cycle based on RU-N’s legacy in the Newark community. Funded by RU-N Chancellors SEED grants and timed for the 50th anniversary of the campus construction and dedication in 1968, Newark Rhythms continues to tell this story by involving students, artists, community members and scholars, and has begun its first year by weaving the project into courses at RU-N and NJIT, where students have done archival research to inform the project’s events and shared experiences.

In February of this year, Newark Rhythms released its first publication, Making a Place: Rhythms, Ruptures and Rutgers in 1960s Newark, a 50-plus-page newsprint book based on the “Making a Place” exhibit designed by RU-N Professor Chantal Fischzang. And currently there’s a website in the works that will feature original research by Giloi, other scholars and students, along with photos and videos of events, info on performances, and other relevant material.

Newark Rhythms explores how RU-N developed into a place—of inclusion, tolerance and opportunity.

In 2018-’19, Newark Rhythms will stage sonic-spatial performances to ask questions about how sound works in and around the campus’ modernist architectural spaces. And in 2019-’20, the previous years’ research and performances will be the subject of a multi-disciplinary symposium at RU-N, bringing together urban and architectural historians, artists and art historians, musicologists and sonic-spatial artists.

Giloi has led the way on Newark Rhythms, along with a programming board including Professors Anne Englot, Nick Kline and Mark Krasovic, Institute of Jazz Studies Director Wayne Winborne, Express Newark Co-Director Victor Davson, Dana Library Director Consuella Askew, and Ian Cofre, who serves as Project Manager and Curator of Visual Arts for the project.

We sat down recently with Giloi to discuss the project’s early development, the history informing it, and project’s next phase.

How did the “Making a Place” exhibit, and the three-year Newark Rhythms project, come about?
The RU-N campus as we know it was built in the 1960s by the prominent New Jersey architectural firm Kelly & Gruzen and others. It features distinct modernist buildings and was part of the 2016 DocoMomo Tour Day. [Docomomo is an international organization that preserves modern architecture, landscape and design.] When we started planning to give tours of Dana Library and other buildings for DocoMomo, we wanted to provide info on the campus and discovered there were books about Rutgers University focusing almost exclusively on New Brunswick, and others where the Newark campus makes only a brief appearance, with the focus usually being on the 1967 rebellion and the Conklin Hall takeover in 1969, but there was very little on RU-N and its construction, and its relationship to the community.

So, what happened next?
I decided the gap needed to be filled and started doing research at both Dana Library and Alexandria Library in New Brunswick, which resulted in the “Making a Place” exhibit. Then [FASN] Dean Jan Lewis connected me with [Photography Professor] Nick Kline to see how we could develop it further. We put together a committee, drafted a proposal for Newark Rhythms, applied for our first Chancellor’s SEED Grant, and started planning.

Where did the name Newark Rhythms come from, and how it is significant?
I was riffing on urban geographer Henri Lefebvre’s term Rhythmanalysis, which explores how a space becomes a “place” when people imbue it with social meaning. In the case of RU-N, many different influences, or rhythms, came together to make a place. Sometimes these influences dovetailed, and sometimes they collided. In the 1940s, Rutgers wanted to become the state university of New Jersey: It bought the University of Newark in 1946 and tried for a state bond issue in 1948 to build a law center, but voters rejected it. In 1959, Rutgers President Mason Gross wanted to build a distinct campus, in the spirit of urban renewal at the time, with a vision of turning Newark into a cultural center rivaling New York and Philadelphia. This time voters approved it, at a time when Newark, believe it or not, had the most urban renewal projects of any city in the U.S. 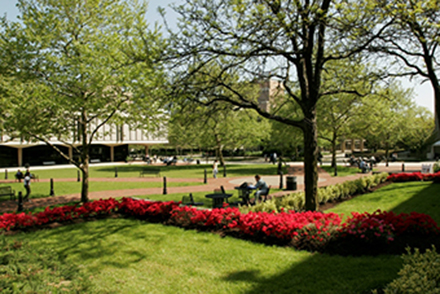 What did that mean for the community in the Central Ward, where RU-N now sits?
The plan was to move 20 percent of Newark’s population, and Rutgers was part of that. So, on the one hand, there’s this idealism to create space for higher-ed for Italians, Jews and Eastern Europeans from families who had arrived through Ellis Island in the early 1900s—many ended up in Newark—but that meant displacing many families in the Central Ward, which was mostly black, as well as Puerto Rican. The plan was aspirational for some working-class groups but exclusionary of others, and that was part of what led to the Black Arts Movement spearheaded by Amiri Baraka, the civil unrest of 1967, and the Conklin Hall takeover by the Black Organization of Students in 1969, an event that ultimately led to the greater inclusion of Newark residents into the university. Newark Rhythms explores how RU-N developed into a place—of inclusion, tolerance and opportunity—by charting its history from that seminal moment of the campus’ construction and dedication through the present.

And the project’s second year, coming up in 2018-’19, will feature performances timed with the 50th anniversary of campus’ dedication in 1968?
Yes. We can think of the 1968 dedication as a founding moment that led eventually to the greater inclusion that we see today. In keeping with this history, the sonic-spatial and other events will revolve around activism, art and social justice to explore the rhythms that went in to making RU-N a physical space imbued with this kind of social meaning.

Thank you very much for taking the time to talk with us.
Thank you.

Our Most Popular Stories of 2019