Rutgers University–Newark History Professor Jan Lewis, who served as Dean of the School of Arts and Sciences Newark from 2013 to 2018, was a groundbreaking and widely acclaimed historian of gender, family and race in the Early American Republic who touched countless lives through her scholarship, service and teaching.

Although she died of cancer in 2018, at age 69, leaving us far too early, Lewis forged a formidable presence on campus, gracing us with wonderful memories as a professor, colleague, mentor and administrator, and left behind a record of outstanding scholarship that has inspired fellow historians for decades and will continue to do so for years to come.

While Lewis authored several well-received monographs during her career, her journal articles and essays also stand out as seminal moments in the history of her field, advancing the discussion of how women, slavery and family operated within the Early Republic’s political environment and why those dynamics mattered.

The importance of those shorter works was celebrated and honored recently with the publication of Family, Slavery, and Love in the Early American Republic: The Essays of Jan Ellen Lewis, published by the Omohundro Institute at The College of WIlliam & Mary, in conjunction with the University of North Carolina Press.

The importance of this collection can’t be overstated.

“Jan’s essays opened up new ways of exploring the Early National period. She pioneered the field of the history of emotions and published extensively on the world of Thomas Jefferson,” said Barry Bienstock, Lewis’ husband and a longtime history teacher at the Horace Mann School in New York City, who spearheaded the project and served as one of its three editors.

Bienstock’s collaborators, also close colleagues of Lewis, were Annette Gordon-Reed, a former RU-N professor who currently is Carl M. Loeb University Professor at Harvard Law School and a Professor of History in Harvard's Faculty of Arts and Sciences, and Peter Onuf, Thomas Jefferson Foundation Professor of History, Emeritus at the University of Virginia and Senior Fellow at Monticello's Robert H. Smith International Center for Jefferson Studies. Each contributed contextual essays for the volume, as did noted historians Carolyn Eastman, Nicole Eustace and David Waldstreicher.

The volume, which comes in at a hefty 429 pages, contains 13 of Lewis’ previously published essays organized under four sections: Gender in the Early American Republic, The History of Emotions, Constitutional and Legal History, and Jefferson Studies. Some of these essays, which had been scattered among many books and journals, were unknown to even her closest friends before this project, prompting Bienstock to first bring up the idea of a collection with Gordon-Reed and Onuf at Lewis’ funeral in 2018.

The following year, that idea gained steam at a roundtable on Lewis' scholarship at the annual meeting of the Society for Historians of the Early American Republic in Cambridge, Mass., where audience members suggested that her essays deserved a wider audience. According to Bienstock, the volume took shape from that session.

James Goodman, Distinguished Professor of History who also teaches in RU-N's MFA Creative Writing program, was a longtime colleague and close friend of Lewis' and also stands behind the new volume. 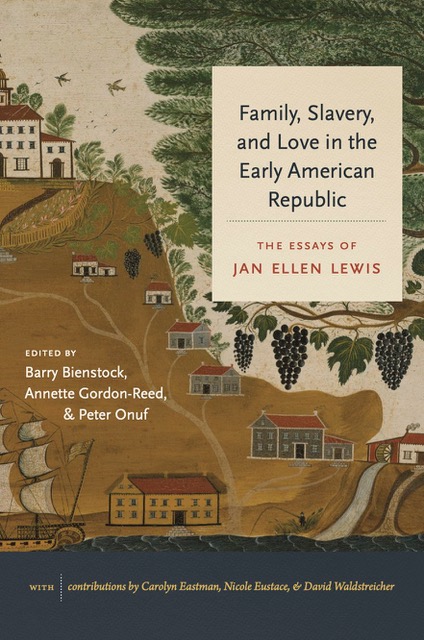 “The importance of this collection can’t be overstated. Books get most of the attention, but in the years that Jan was coming up and making her mark in Early American social and cultural history, essays were where the action was,” said Goodman. “The trouble is that except for history graduate students and historians in specific fields, essays don’t circulate nearly as widely, and over time their impact wanes. This essay collection transforms decades of groundbreaking but widely dispersed essays into a bound book of its own, which will make it easier and more likely that future generations of scholars and teachers will learn from, build upon and argue with Jan's work.”

According to both Bienstock and Goodman, the idea for the volume actually emerged while Lewis was still alive. Cambridge University Press had approached her to embark on the project while she was Chair of the History department, but when she moved into her administrative role for SASN, taking over as acting Dean twice and serving for five years as Dean, the project was put on hold.

“It is evidence of Jan’s stature among historians in her field—and even with that no small miracle—not just that this book exists, but that a distinguished editor at a distinguished university press offered to publish a volume of her essays decades before she died,” said Goodman.

In addition to her pathbreaking scholarship, Lewis held many leadership roles during her career. She was elected the 36th president of the Society for Historians of the Early American Republic (2015–2016), served a term on the editorial board of the American Historical Review, as board member at Monticello and the Thomas Jefferson Papers, and as reviewer of fiction and non-fiction for Phi Beta Kappa’s Key Reporter, among many notable contributions. She also served a three-year term on the New Jersey Council for the Humanities Board of Trustees and was President-elect of the Society of American Historians at the time of her passing.

Despite the status that came with these roles, no title was more important to Lewis than that of doting grandmother to her two granddaughters, Ida and Beatrice, which speaks to the second reason Bienstock felt compelled to pull together this project.

“The thing that Jan found most distressing about her terminal illness was that our granddaughters would grow up not remembering her, and anyone who was friends with Jan knew how central they were to her existence. Nothing pleased Jan more than being a grandmother,” said Bienstock. " This volume takes on a personal mission to ensure that Beatrice and Ida will one day get to know the grandmother that loved them dearly and left them much too soon.”

He is particularly grateful to all who helped bring the volume to fruition and is extremely proud of the final product.

“Teaching is an essential part of who I am,” said Bienstock, “but I’ve told people that this book is the most meaningful thing that I’ve done.”