Mustafa Gatollari (SASN ’08, MFA ’17) wants to reassure you this Halloween that if you’re haunted by ghosts, he’s here to help.

As a star of the reboot of A&E’s Ghost Hunters reality TV series, Gatollari has seen (and heard) it all while investigating cases with his team of paranormal experts in far-flung places like Vicksburg, Miss., Steamboat Springs, CO, and Haines, Alaska. That’s a far cry from his roots in Lodi, NJ, and New City, NY, where he grew up and first discovered his love for all things spooky and spine-chilling, but it’s only fitting that the triple English, Theater and Journalism major fused his passions and found his calling with the new version of this series, which ran for two seasons in 2019 and 2020 before being canceled due to Covid-19.

Gatollari, 34, an actor and writer of nonfiction and screenplays, cut his teeth at SASN devouring literature courses, performing in theater productions, and writing for The Observer before returning to RU-N to complete an MFA in Creative Writing. In some sense, though, Gatollari never left, working for the Newark Computing Services Help Desk on and off between 2005 and 2019 while taking acting classes, auditioning for parts, writing screenplays, and working a variety of other media, teaching and administration jobs to make ends meet. He’s had small non-recurring roles on the reboot of the TV show MacGyver and NBC’s The Blacklist, but his big break came in April of last year when he landed the role of paranormal historian and site analyst for Ghost Hunters.

We sat down with Gatollari to discuss his fascination with the paranormal and the show.

What got you interested in the paranormal?
I lived in Lodi, NJ, for most of my life, but from age 4 to 12 we lived in this enormous three-story house in New City, NY, that had six bedrooms, four baths, two half-baths and two kitchens. A lot of very strange things happened in that house that we couldn’t explain. Our cousins noticed it, too: stacks of boxes mysteriously moved across a room, cupboards swinging open and closed in our kitchen, and other weird phenomena. I come from a large Albanian Muslim family, which thought the house was inhabited by jinn, these spirits—some bad, some good—that are part of Islamic mythology, and that the house was cursed. I was always second-guessing whether any of this was real and wanted to disprove the religious stuff. When I was 12, after we’d moved back to Lodi, I read Stranger Than Science, by Frank Edwards, who told weird stories of unexplained phenomena that were really well-documented and made me want to get into the research side. 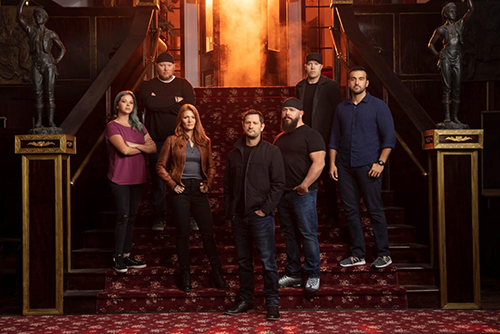 So, what happened from there?
I ended up doing research on our house in New City after high school and discovered the guy who’d lived there before us, a president of a local insurance company, had gone missing, and two neighbors I talked to said he’d killed himself in the house. I didn’t believe the house was actually cursed, but I’d been reading a lot about the paranormal field and started exploring classic locations like Devil’s Tower, in New Jersey, with a Catholic friend, Mike, and my younger brother, Rahim. Mike had been into the original Ghost Hunters series and had a lot of equipment, and we were asked by a lot of Albanian and Italian-Catholic families—in New Jersey, Staten Island, Philadelphia—to start doing investigations at their homes, which we did on and off for 10 years, up until 2018.

Ghost Hunters seems like the perfect fusion of your talents and knowledge.
Yeah, it is. I get to research like an investigative journalist, dig into property records, do interviews, use my knowledge of tech and in the paranormal, and be on-camera. It’s a great opportunity to work with my own personality in a high-pressure situation doing something I really love.

There were 13 episodes in season 1 of the Ghost Hunters reboot and 11 in season 2, plus some special episodes. When were these shot, and what was the production schedule like?
We shot both seasons between June 2019 and February 2020. Usually we’d do two weeks on the road, one episode per week, followed by one week off—although sometimes we'd do three weeks on the road. Mondays and Tuesdays we’d film location and set-up shots plus voiceovers for other episodes in the afternoon, then film 12-hour investigations from 4pm to 4am or later. I’d then return to my hotel room and review evidence and footage for another four hours and log timecodes of the best parts, which contributed to a rough edit of the narrative. I’d maybe get an hour of rest each of those days, and then Wednesdays during the day was devoted to footage review, followed by the final night of investigation. On Thursdays we did more evidence review and shot our reactions to it, then got to blow off steam that night by going out to dinner and drinks. On Fridays we filmed the scenes where we reveal and discuss the evidence with the folks whose place we investigated, plus a goodbye scene. Then we either took a day off before heading to our next location or headed there right after.

It sounds like you got very little sleep until Thursday and Friday nights.
Exactly. And when I wasn’t filming I’d be writing articles for a website I work for, which is one of my other main streams of income. So, I never stopped while on the road, but it was so much fun. 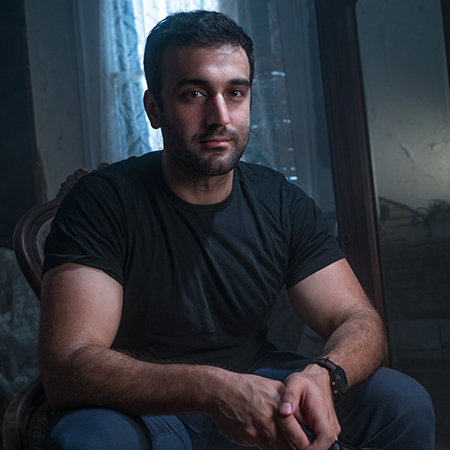 What was your favorite Ghost Hunters case?
The Haines, Alaska, case because of the sheer variety of evidence that occurred within a brief timeframe corroborated by all our electronic devices: our body cameras, data-loggers, electron multiplier camera, ambisonic microphone, plus our personal experiences.

Do you think the show will be picked up by another network?
It’s an expensive show to produce, especially right now with the pandemic, but I think there could be some interest down the line.

What other projects are you currently working on?
I do a lot of Ghost Hunters–related events with other cast members all over the country—usually fans and groups call us to do workshops and investigations with them at different sites, plus Q&A sessions about the show. We just did the annual AlienCon event this week online. I also have a book coming out about the show with Brandon Alvis, one of the other cast members, that delves into our Ghost Hunters cases and some investigations he’s done on his own: It’s half paranormal research and half historical accounts of the locations, plus our reflections on our investigations. That’s due out in early next year.

And you have some other acting gigs going on as well?
Yes, I’ve been shooting scenes for a TV drama called Nightbirds that’s being directed by David Vadim, my acting coach, and has Aida Turturro from The Sopranos in it. I’m also sending out audition tapes for other roles, I'm writing a lot for the website Distractify, and I handle shipping for a record label to make extra money. I’m also working on a paranormal-themed stageplay and another dramatic play that we were trying to stage at Lincoln Center, which is on hold now due to Covid. And I’m raising my two kids: Zach, age 5, and Eva, age 2. So, I’m keeping busy.

Well, thank you for sitting down with us. And best of luck going forward.
Thanks. It’s been fun.

Top photo: Gatollari and his 5-year-old son, Zach.
Middle & bottom photos: Courtesy of A&E Networks
Bios of cast members plus all of the Ghost Hunters episodes can be seen here.

Senior Myrna Bonin Keeps Her Eye on the Graduation Prize

Salamishah Tillet Awarded Carnegie Fellowship for ‘Me Too’ Cultural History