Inaugural Clement A. Price Chair in Public History and the Humanities and Director, Price Institute, Rutgers-Newark 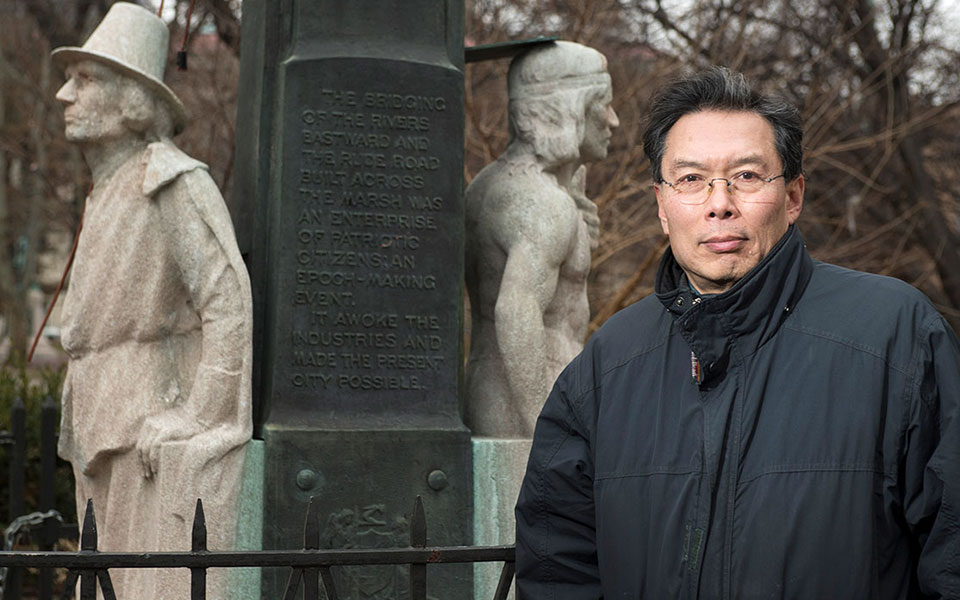 If there’s one thing Jack Tchen wants his students to take away from this article it’s this:

“Please, make sure you put that in there,” said Tchen, a world-class scholar, curator, organization-builder and long-time NYU history and urban studies professor who joined Rutgers University-Newark this fall to lead the Clement A. Price Institute on Ethnicity, Culture and the Modern Experience and serve as the Inaugural Clement A. Price Chair in Public History and the Humanities.

His parents arrived as refugees from China in the early 1950s after the “repeal” of the Chinese Exclusion Law. Still, the United States capped entry of those of Chinese heritage at 105 people per year.

“That law was a part of the longstanding Anglo-American fear of ‘yellow peril,’” he said. “My parents learned of a landmark 1898 Supreme Court ruling in United States vs. Wong Kim Ark that ruled any baby born on U.S. soil was a citizen. So that was me.”

He makes a point of sharing this personal information to show the connection between anti-immigrant and racist sentiments then and now have shaped who are welcomed and who are not welcomed to enter and stay in the United States.

“Birthright citizenship is exactly what Trump is trying to repeal now,” he said. “That attack against the promise of ‘equal justice for all persons’ under the Fourteenth Amendment is a critical though often forgotten part of our nation’s civil rights history. I’m part of that history – we all are.”

Tchen’s academic and curatorial pursuits stem, in part, from his experiences growing up a racialized minority in the Midwest – where he was the only non-English speaker in kindergarten – and seeing that pattern of white Protestant’s others in the New York metro region. He’s spent the better part of four decades studying how intersected racial categories morph over time, unearthing and archiving the experiences of various marginalized communities – Asian, black, Italian, Irish, Jewish and indigenous among them – which he says have been glossed over by American history.

At the Price Institute, he established the New York Newark Public History Project to challenge those accounts of history. Among the stories being examined is “The Indian and The Puritan,” a statue created by Mount Rushmore sculptor and known KKK sympathizer Gutzon Borglum in 1916.

"It is so easy to supersede the history of the Lenape people from this region with that of the colonists. With this project, we will replace the myths of our past with the truths of European diseases, violence and claims of colonial property rights – all of this should be basic public knowledge,” he said. “And we’re supporting the newlyformed United Lenape Nations Project to archive and tell their own history and make their own culture.”

At Rutgers-Newark, the chance to work at the most diverse university in the country committed to social justice is what draws him to the Brick City each day.

“That’s why I feel close to the students I work with here at Rutgers-Newark,” he said. “I really identify with them and love researching the past, present and future collaboratively.”

Fun Fact:
“I would love to be a blues harmonica player, but I have no musical talent whatsoever,” Tchen said. “I sing flat, and my ear doesn’t exist for that.”

In 1997, the Clement A. Price Institute on Ethnicity, Culture, and the Modern Experience at Rutgers-Newark was founded to foster research and programming in the arts and humanities that emphasizes intercultural understanding. The institute hosts annual programs, such as the Marion Thompson Wright Lecture Series, a conference established in 1981 that explores themes related to increasing historical awareness in Greater Newark. The institute is named for the late Clement A. Price, a Rutgers-Newark distinguished professor and Newark city historian committed to social justice and civic engagement in the communities in which he lived and whose teaching and research focused on African-American history and culture, urban and social history, and American race relations.