The fraternity lasted only 10 years, but the bonds formed have lasted a lifetime. And in honor of the 50th anniversary of the Kappa Phi’s founding, the surviving brothers are raising money for an endowed scholarship at the School of Arts and Sciences–Newark (SASN) for students with financial need.

The move is unusual. Typically endowments are set up by individual donors, not multi-donor groups. But the brothers, who are scattered across New Jersey and the rest of the country, are determined to make it happen.

“Many of us are still in touch and get together when we can, and at our 50th reunion a couple of years ago, I thought, ‘This 50th is great, but we’re not getting any younger, and eventually the fraternity will die if we don’t do something. So, why not set up a scholarship to keep the Kappa Phi spirit alive,’” said founding member Len Serafino, who now resides in Nolensville, Tenn., outside of Nashville.

At the suggestion of one of his brothers, Serafino spoke to Patricia Margulies, Assistant Dean for Development for SASN, who immediately saw the potential. They worked together on the fundraising period and scholarship.

Though they set out a five-year window to raise the money starting in 2018, the brothers are on pace to reach the halfway mark in just two years via donations from nearly 50 Kappa Phi members and their wives. They’re also considering starting a crowdfunding campaign through the Rutgers University Foundation to solicit outside gifts. Anyone can donate.

I’ve said to many of the guys that we’re in a season of life when it’s time to give back, and I feel very proud in the way that so many have stepped up.

“Rutgers–Newark is extremely appreciative that this group of alumni have stayed in touch and so value the education they received that they want to give back to help current students reach their potential,” said Margulies. “We have a way to go with fundraising, but these men are committed to reaching their goal.”

In 1967 RU-N was a commuter school with its campus was spread among a handful of multipurpose downtown buildings, near the offices of companies like Prudential and department stores such as S. Klein and Hahne’s. For the members of Kappa Phi, their modest, one-room fraternity house—rented for $100 a month—was an oasis between classes, a place to play cards and enjoy spirited conversation and debate, and hold mixers and parties. Science Professor Les Turoczi served as the fraternity’s first faculty advisor.

They started the house after two of the founders had explored fraternity life and weren’t entirely satisfied with the available options, decided to set up their own, and approached friends. The original 16 members chose the Greek letters KΦ to set themselves apart from the other fraternities and sororities on campus, which had three letters. They were a standalone house unaffiliated with a national fraternity. Only recently, after doing some research, did the brothers discover that there was already a national KΦ, formed in 1916 in Kansas, and it was and is a Christian sorority.

“I laughed when we discovered this because in the ’60s we were looking to be different, and realizing recently that it had been done and was a sorority was pretty funny,” said Serafino. 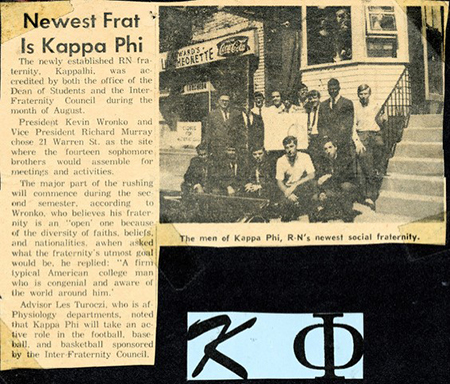 The members of Kappa Phi moved on to successful careers and started families after graduating: Four are physicians, another four became attorneys, and two earned Ph.Ds. There are speech pathologists, social workers, entrepreneurs, business executives, educators, writers, translators and police chiefs among them as well.

Over the years they have called each other on birthdays, attended Rutgers football and basketball games together, visited one another while traveling on business, and held reunions. Thirty-five brothers from around the country attended the 50th reunion in Toms River, NJ, in 2017, coming from as far away as California, Florida and Tennessee. Another 30 showed up for a gathering in September at the new RU-N Alumni Center, in part to maintain momentum for the endowed scholarship fundraising drive.

For Serafino, who’s been leading the effort with a handful of brothers, this has been heartening to say the least.

“I’ve said to many of the guys that we’re in a season of life when it’s time to give back, and I feel very proud in the way that so many have stepped up,” said Serafino. “It speaks to the way we’ve stayed together and in touch all these years. We really are doing something good, and it feels special that this will live on long after we do. All of the brothers I’ve spoken with feel the same.”

If you'd like to donate to the Kappa Phi Scholarship Fund, please visit here.