About 160 people from across the state, region and country attended the Fourth Annual Conference on Youth Development and Juvenile Justice at Rutgers University–Newark last week.

The attendees, who work at universities, nonprofits, government agencies, and in the law and healthcare fields, gathered for the one-day conference at the Rutgers Law School to take part in presentations and panel discussions on the interaction between social media and youth violence, social media monitoring by police and schools, life after prison, and juvenile sentencing.

The conference is the brainchild of RU-N Psychology Professor Paul Boxer, who is Director of the Rutgers Center on Youth Violence and Juvenile Justice, a multidisciplinary center linking RU-N and Rutgers Biomedical and Health Sciences (RBHS) faculty to community and government entities around the issues youth violence and juvenile justice.

Boxer co-directs the center with Steve Silverstein, a Professor of Psychiatry at RBHS, and Professor Laura Cohen from Rutgers Law School.

“This year’s conference drew people from diverse agencies, and we hit on an important topic no one has organized around yet,” says Boxer.

Hundreds of thousands of kids are being monitored. What does it mean for them to be going through this?

Among the presenters was ethnographer Jeffrey Lane, Assistant Professor of Communication at Rutgers School of Communication and Information, who discussed The Digital Street, his new book that traces the online and offline experiences of black teenagers in the shadow of the Harlem Children's Zone as gentrification swept through the northern Manhattan neighborhood and social media came to permeate all facets of life. For five years, Lane studied how street life in Harlem plays out on and across the physical street and the digital street among youth, neighborhood adults and the authorities; the book explains how social media use and the visibility of online interaction shape neighborhood violence and its countervailing forces.

Lane described himself as an observer-participant in the lives of his teen subjects, connecting with them offline first before becoming “friends” online, and only then asking about their online content.

“My goal was to relate to the whole of their online life, and to understand their networks, to see the effects on real-life street violence and how their offline and online lives shaped each other,” said Lane. “For these teens, social media became the public face of street life.”

Presenting after Lane was Rachel Levinson-Waldman, who is Senior Counsel for the Liberty and National Security Program at NYU’s Brennan Center for Justice. She talked about social media monitoring of youth by law enforcement, schools and private industry, and the constitutional issues around this.

She traced the dramatic increase in social media monitoring by police departments across the country between 2010 and 2017, and described how departments are monitoring the online activity not only of suspects and public accounts but until 2017 also private accounts, which ran afoul of the major social media companies’ terms of use. She also described how departments have extended the practice to political activists, and how third-party software and service companies have been marketing the practice to school districts ostensibly to guard against school shootings and cyberbullying.

“Orange County, Fla., has more students in its school districts than all the people in Little Rock, Ark.,” Levinson-Waldman said. “Hundreds of thousands of kids are being monitored. What does it mean for them to be going through this? Good digital hygiene is essential, and we should be teaching this, but are we teaching students to expect or anticipate this throughout their lives, and what are the implications of this?” 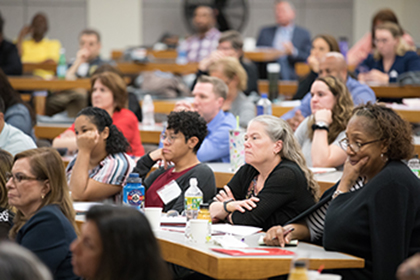 Other speakers included music producer and songwriter Eric Campbell, who was a juvenile offender and who is the founder and director of Brooklyn, NY–based SPUD Inc., a nonprofit that uses music production to reach at-risk youth.

Following him was a panel discussion on New Jersey’s efforts to comply with the U. S. Supreme Court's landmark decision in Montgomery v. Alabama, which outlawed mandatory life without parole sentences. The panel consisted of Campbell, along with Alexander Shalom, who works for the American Civil Liberties Union of New Jersey, and Tyler Dougherty, of the New Jersey Office of the Public Defender.

When they started the center in 2015, Boxer, Silverstein and Cohen hoped to turn it into a nationally recognized hub for interdisciplinary research and programming on juvenile justice and youth violence issues, and enable researchers to make their scholarship accessible to practitioners in the field.

This latest conference is part of that larger effort, and the team seems to have found a winning formula.

“We seem to get a great response when we focus on cutting-edge issues, as we did with social media, surveillance and youth violence this year,” says Boxer. “We’re also staying topical in the morning sessions and adding color and depth to issues we talk about academically by highlighting personal stories in the afternoon. That combination has gotten us great feedback.”

An Alumni Valentine's Story: From Punk Rock to Power Couple