It’s the latest in a string of awards for Keene, who received the 2016 American Book Award, 2016 Lannan Literary Award for fiction, and 2018 Windham-Campbell Prize for Fiction for his short-fiction collection Counternarratives (New Directions, 2015) and in 2018 was awarded a coveted MacArthur "Genius" Fellowship.

The Lambda Award is the second official nod for Punks, which was also was awarded the Thom Gunn Prize for Gay Poetry from the Publishing Triangle a month ago.

“I was quite surprised to receive this honor, in part because it took this collection many years to make it into print,” said Keene, “but the wait was worth it.”

In winning the prize, Keene follows in the footsteps of MFA Director Rigoberto González, who was awarded the Lambda for Poetry in 2014 for his collection of poems Unpeopled Eden (Four Way Books), and MFA alumnus Saeed Jones, who received the 2020 Lambda in the Gay Memoir/Biography category for How We Fight for Our Lives (Simon & Schuster). Faculty members Brenda Shaughnessy and Timothy Stewart-Winter were finalists in 1999 and 2017, respectively.

Though Punks reaches back more than 30 years to Keene’s time as a member of the Dark Room Collective in Cambridge, Mass., and Boston, many of the poems were written in the late 1990s (when Keene participated in the Cave Canem Writers Workshop) right up through 2021. The volume highlights many different styles—from very conventional, including sonnets, to experimental—and as with Keene’s award-winning story and novella collection Counternarratives, engages with history and historical figures and voices. 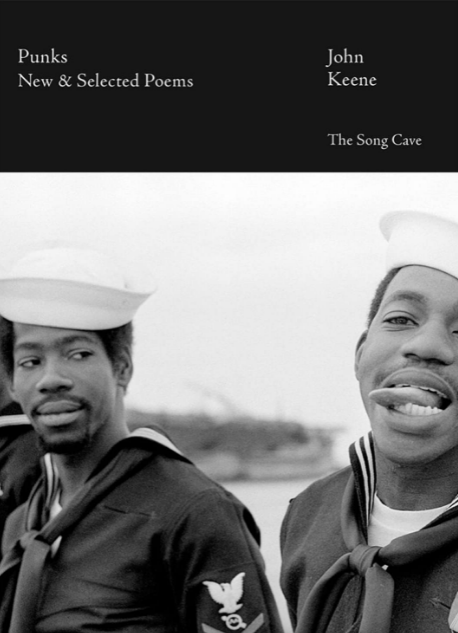 That the collection came together at all was somewhat serendipitous.

A few years ago, after a reading Keene gave in Brooklyn, NY, one of the editors at Song Cave asked him if the poems read that night were in a collection. They were not: Some had appeared in a chapbook, and most had been published in various places, some in quite different form. After further discussion with the editor, Keene brought the poems together, in seven sections, and added two more recent poems, all of which were published as Punks. Each of the sections, which have different emphases, starts with a quote from a different Black poet, and one Asian American, all of whom have influenced Keene over the years. Keene did this as a way to celebrate these writers, who were (or are) mostly LGBTQ from across the Black diaspora, and to ground each of the sections that follow.

“With the historical figures who appear, one of the things I was thinking about was opening the vista beyond my own personal experience, to suggest possible connections with prior figures, my own immediate ancestors,” said Keene.

Punks has gotten rave reviews across the world of contemporary poetry.

Tyehimba Jess, a Pulitzer Prize–winning poet who teaches fiction and poetry as an Associate Professor of English at the College of Staten Island and the City University of New York, said of Keene’s new landmark collection:

“With depth and breadth, Punks weaves together historic narratives of loss, lust and love. The many voices that emerge in these poems—from historic Black personalities, both familial and famous, to the poet's friends and lovers in gay bars and bedrooms—form a cast of characters capable of addressing desire, oppression, AIDS and grief through sorrowful songs that we sing as hard as we live. At home in countless poetic forms, Punks reconfirms John Keene as one of the most important voices in contemporary poetry.”

What’s all the more remarkable is that Keene is not just a poet but wears many hats.

I’m thrilled, but not surprised, to see John Keene recognized by Lambda Literary. He’s one of America’s best poets and public intellectuals, and he’s also one of Rutgers–Newark’s most dedicated teachers.

Keene is also a translator of Brazilian authors, as well as texts from Spanish and French.

In addition to his many literary awards, in 2017 Keene also was awarded the Rutgers Faculty Scholar-Teacher Award, given across all Rutgers' campuses to "honor tenured professors who make exceptional connections between their academic research and their teaching."

Professor Jack Lynch, former Chair of the English department and a longtime colleague of Keene’s, has had a front-row seat to all that he brings to the table for readers and the RU-N community alike.

“I’m thrilled, but not surprised, to see John Keene recognized by Lambda Literary. He’s one of America’s best poets and public intellectuals, and he’s also one of Rutgers–Newark’s most dedicated teachers,” said Lynch. “We’re amazingly fortunate to be able to work with him. His most recent collection of poems, Punks, like his Counternarratives before it, is going to be remembered as one of the great American books of the 21st century.”

Keene, meanwhile, has appreciated not just the official reception for Punks but also the reaction on the street.

“One of the most gratifying aspects of publishing Punks: New and Selected Poems has been to witness the effect it has had on readers, who have been quoting the poems on social media and sharing them online,” said Keene. “If the collection, however, reaches even one other person and speaks to them, particularly in this moment of heightened social and political backlash, fueled by racism, sexism and misogyny, homophobia and transphobia, classism and more, then it is doing its job.”

To see all of the 2022 Lambda Literary Award winners, visit here.