Keene received the award last night at the 73rd National Book Awards Ceremony & Benefit Dinner, held by the National Book Foundation at the Cipriani Wall Street in New York City. The event took place in-person for the first time in two years due to the Covid-19 pandemic and was livestreamed online.

Keene, Chair of RU-N’s Africana Studies department, who also teaches in the English department and MFA Creative Writing Program, has been receiving wide acclaim for the volume, which won the Lambda Literary award and the Thom Gunn Prize for Gay Poetry earlier this year. 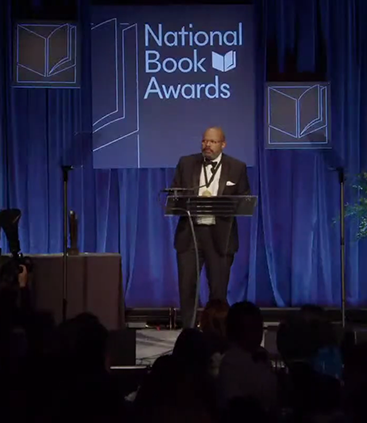 As he stood at the dais after receiving the award and searched for a sentiment to capture his feelings, Keene said, “I’m actually crying. I’m in shock!” much to the delight of the audience. After the warm laughter died down, he continued, “I put together some notes because I said, in the improbable instance that I actually receive this award, all the words—I work with words, right?—would fly right out of my head.”

Punks, a sprawling 234-page volume, is split into seven sections, spans decades and includes previously unpublished and new work by Keene. The collection weaves together historic narratives of loss, lust and love via many voices, ranging from historic Black personalities to Keene’s friends and lovers in gay bars and bedrooms addressing topics such as desire, oppression, AIDS and grief. Keene calls the work a “mixtape” for the wide range of poems in an array of styles that the volume encompasses, from conventional (including sonnets) to experimental, all woven together with an overarching theme and internal architecture that provide a foundation and coherence.

At the awards ceremony last night, the winner of Keene’s category was announced by National Book Award Poetry Panel Chair Kwame Dawes, the George Holmes Distinguished Professor of English at the University of Nebraska and a Chancellor of the Academy of American Poets. Dawes is the author of 22 books of poetry and numerous other books of fiction, criticism and essays.

After Keene reached the stage he hugged Dawes, posed for pictures, then started his acceptance speech by thanking the judges and congratulating his fellow finalists, long-listers and short-listers. He then thanked a number of people, including his partner, Curtis Allen; his parents; his publisher, editors and agent; the Dark Room Collective and Cave Canem; and his RU-N students and colleagues.

It’s an incredible honor to receive this award, and I am still in a bit of shock.

He continued by dedicating his award “to all the readers out there and to my ancestors on whose shoulders I stand, ancestors by lineage and association, including the several generations of writers, particularly the Black, gay and trans writers, especially those whom we lost to HIV/AIDS in the 1980s and 1990s,” said Keene. “I had the pleasure of hearing and meeting some of these writers, and let me just say they were brilliant, they were fierce, they were original, they were daring, they were courageous, and their voices not only captured the world they were living in but envisioned a better one. Let’s return to their words and the words of so many vital writers and artists we may have forgotten.”

Keene then urged the audience to support libraries and librarians, who have come under attack in several GOP-led states as activists and legislators have called for book banning, along with workers in the publishing and other industries, writers who speak up and face censure and oppression, those fighting for social, political and economic justice and a more equitable and just world, and those fighting climate change and its devastating effects on the planet.

On Wednesday morning, as Keene was basking in the afterglow of the award, he paid further tribute to RU-N.

"It’s an incredible honor to receive this award, and I am still in a bit of shock,” he said. “In my speech last night, I began by noting that of all the improbable outcomes, this certainly was one. I also thanked my brilliant students, colleagues and the administration at Rutgers-Newark, and I want to share again that they inspire me tremendously & make it a joy to come to work every day.”

Keene’s colleagues at RU-N celebrated his latest accomplishment as well, including SASN Dean Jacqueline Mattis, who had kind words for her colleague. 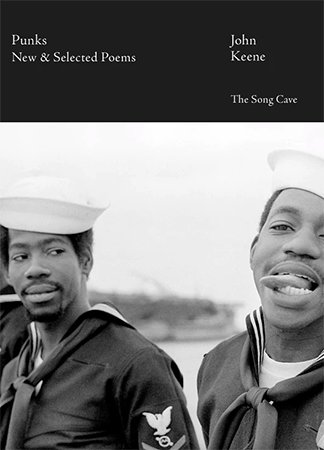 "You see the evidence of John's brilliance in the accolades he continues to amass, from the McArthur Genius award to the multiple awards that this book has brought,” said Mattis. “We are so proud of him for the work that he has produced. And we are certainly grateful for the gift that he is as a human being, and equally grateful for the gifts that he brings to our community and to all communities through his writing, his teaching, and through the beauty and humanistic power of his words."

Keene is known for being a man of many hats. He’s not only an award-winning novelist and poet but also a translator of Brazilian authors, as well as texts from Spanish and French.

In 2017 Keene was awarded the Rutgers Faculty Scholar-Teacher Award, given across all Rutgers' campuses to "honor tenured professors who make exceptional connections between their academic research and their teaching." And in 2018 he was awarded a coveted MacArthur "Genius" Fellowship.

At the dais last night, as Keene wrapped up his acceptance speech, he paused before reciting a line by Robert Hayden, one of his favorite poets, which echoed the themes of loss and love sprinkled throughout his newly heralded poetry volume, Punks: “What did I know, what did I know of love’s austere and lonely offices?”

Tapping the Power of Jazz and Poetry