On October 31, 2019, Rutgers University–Newark’s Humanities Action Lab (HAL) is bringing together more than 100 scholars, students and activists from all across the globe this week for the official launch of the group’s latest initiative, Climates of Inequality: Stories of Environmental Justice, a multimedia exhibit created by more than 500 students and environmental justice advocates in 22 cities.

Participants of the two-day conference, many of whom contributed their work to the project, will gather for the first time at Express Newark to share their local histories of environmental challenges and develop a collective vision for activating community memory for global climate justice. Sessions will be introduced by national and grassroots leaders in the field hailing from Newark and around the country, along with Mexico, Puerto Rico and Colombia.

Among the key presenters at the event will be Newark Mayor Ras J. Baraka; RU-N Chancellor Nancy Cantor; Adrienne Hllis, Lead Climate Justice Analyst for the Climate and Energy Program at the Union of Concerned Scientists; and Jacqui Patterson, Director of the NAACP Environmental and Climate Justice Program.

This international traveling multimedia exhibition explores how the climate crisis is exacerbating inequality both in the U.S. and globally.

“We are so thrilled for the opportunity to welcome people from such diverse places to our Newark campus and community so we can learn from each other's local efforts and envision how we can work together moving forward," said Liz Sevcenko, HAL’s Founding Director.

The Climates of Inequality exhibition is currently on display in the atrium of Newark’s Hahne’s Building through December 15 before traveling to the more than 20 communities that created it. A hands-on experience, it invites guests to “visit” communities on the frontlines of the climate crisis—from Newark to New Orleans—through virtual reality headsets and connect their dramatic histories to innovative future visions.

By compiling local histories in an evolving, internationally traveling exhibit with ongoing events, the project aims to inspire climate action that understands, and undoes, past environmental harms while homing in on communities of color that have been disproportionately affected by environmental pollution and climate change.

“While the climate crisis has dominated headlines and shaped political platforms, less attention has been devoted to the experiences of communities who bear the greatest impact,” said Margie Weinstein, HAL's Associate Director. “In addition, scientific data alone has not been effective in communicating climate change to the public. There are human tales, ones that can’t be measured through scientific charts or raw statistics.”

Some of those stories are from Newark, where organizations have been working to mitigate environmental pollution and industrial waste for years, including in the Ironbound section of the city. 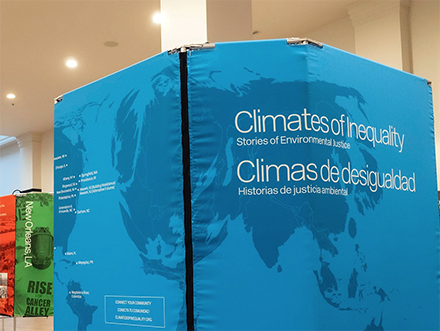 “We are honored to be part of a legacy of resistance, in the Ironbound and the whole city of Newark,” said Maria Lopez-Nunez, Director of Environmental Justice and Community Development at the Ironbound Community Corporation (ICC), a co-creator of Climates of Inequality in Newark, which features histories of the ICC and other local environmental justice movements.

Funding for Climates of Inequality has come from RU-N’s School of Arts and Sciences–Newark, HAL’s university partners and their local funders, and Express Newark.

HAL is an international coalition of universities, issue organizations and public spaces collaborating to produce student- and community-curated public projects on pressing social issues. Under its unique model, university students partner with organizations in each city to develop local versions of national traveling exhibits, web projects, public programs and other platforms that draw on local experiences around these important topics. Projects travel nationally and internationally to museums, public libraries, cultural centers and other spaces in each of the communities that helped create them.

Past HAL initiatives include States of Incarceration and the Guantánamo Public Memory Project. The former brought together more than 800 people in 18 states who together created a traveling exhibit, web platform and series of public dialogues on mass incarceration in the U.S.—including immigration detention centers—and the communities hit hardest by the explosion of prisons and people placed behind bars. The latter brought together more than 300 students from 13 universities to research, document and interpret the history of the U.S. naval base at Guantánamo Bay, Cuba, and foster public dialogue on the urgent questions it raises today.

Each of HAL’s projects has reached many thousands of people from across the country and beyond, and inspired discussions on how to tackle large problems at the local and national level. The group’s current Climates of Inequality project follows in that vein.

“This international traveling multimedia exhibition explores how the climate crisis is exacerbating inequality both in the U.S. and globally,” says Sevcenko, “People can see, through photographs, text and interactive media, how the histories of the hardest hit communities may hold the key to confronting the climate crisis and inform strategies for enacting effective and lasting policy change.”