Stephanie E. Jones-Rogers (GSN ‘07) is Associate Professor in the Department of History at the University of California, Berkeley where she specializes in African-American history, the history of American slavery, and women’s and gender history. Her book, They Were Her Property: White Women as Slave Owners in the American South, was published in February of 2019 by Yale University Press, and is available in paperback for the first time today.

Bridging women’s history, the history of the South, and African American history, They Were Her Property explores the role of white women in the American slave economy. Jones-Rogers draws on a variety of sources to show that slave-owning women were sophisticated economic actors who directly engaged in and benefited from the South’s slave market. Because women typically inherited more slaves than land, enslaved people were often their primary source of wealth. Not only did white women often refuse to cede ownership of their slaves to their husbands, they employed management techniques that were as effective and brutal as those used by slave-owning men. White women actively participated in the slave market, profited from it, and used it for economic and social empowerment. By examining the economically entangled lives of enslaved people and slave-owning women, Jones-Rogers presents a narrative that forces us to rethink the economics and social conventions of slaveholding America.

We talked to Jones-Rogers about the book, why she was drawn to this topic, and her current research.

Where did you get the idea for this book?

As a Ph.D. student, I took a research seminar with Nancy Hewitt and we were tasked with completing an original research paper. I chose to write about Marie LaLaurie, who was a married, French creole, slave-owning women living in New Orleans, Louisiana who brutalized, mutilated, and murdered some of the slaves she owned while her husband did nothing to stop her. As I circulated my paper for a workshop session, my classmate Alix Genter asked me if there were other women like Marie, who were married, but who also owned and controlled their own property. I didn't know that answer then, but eventually, I wrote a dissertation that answered her question. My dissertation serves as the basis for my first book.

Why did you feel this was a story that needed to be told? How has it been overlooked in the past?

As I was completing coursework in the Rutgers-New Brunswick Doctoral program I noticed a disconnect between the fields that I was most interested in: African-American history, the history of American slavery, and Women's History. On the one hand, scholars who documented the experiences of formerly enslaved people routinely referred to individuals who identified white southern women as their former owners. And yet historians of American slavery and women's historians dismissed the idea that these women could own enslaved people except in the rarest and most exceptional of cases. This disconnect frustrated me and led me to question which argument could be substantiated in the archive. I felt compelled to tell this story because our understanding of American slavery and the experiences of enslavement is impoverished and partial because we haven't grappled with white women's slave ownership. Not reckoning with this part of our history not only does us a disservice, it also dismisses or diminishes the experiences of those enslaved people who were subject to the will of female slaveowners. For me, telling this story is about justice.

It is vital that we remember that enslaved people were the true experts on slavery.

What was the most startling or unexpected thing you found in your research?

Another reason why so many historians have dismissed or diminished the importance of slave ownership for white women is that they have assumed that women, especially married women, couldn't own slaves because of legal constraints upon women's rights to own property in their own right. Rather than proceeding from this assumption, I reflected upon the many enslaved and formerly enslaved people who claimed to have female owners, particularly married ones, and I sought to legitimate the remembrances by seeking out evidence to support their claims in a variety of places where wouldn't typically think we would find women: census records, financial records, Civil War Era military correspondence, legal materials which documented the purchase and sale of enslaved people, even the letters and account books of slave traders. When I started this project, most folks told me I would find few if any white slave-owning women in these documents.  Thus far, I've found thousands of them.

What do you want your readers to walk away with after reading this book?

It is vital that we remember that enslaved people were the true experts on slavery. As the individuals subjected to perpetual bondage at the hands of white men and women, they were able to tell us things about slavery that their owners never could. I respect them as organic intellectuals who possessed the deepest knowledge of American slavery. It was their testimony and remembrances, and it was their courage to talk about the violence done to them, even when they knew it could lead to death, that made me write this book. In fact, I would go as far as to say that this is their book. I believed them when they shared what they endured at the hands of white southern women, and I reconstructed those accounts in ways that leave no doubt that enslaved and formerly enslaved people were the most reliable and credible witnesses to slavery's horrors. 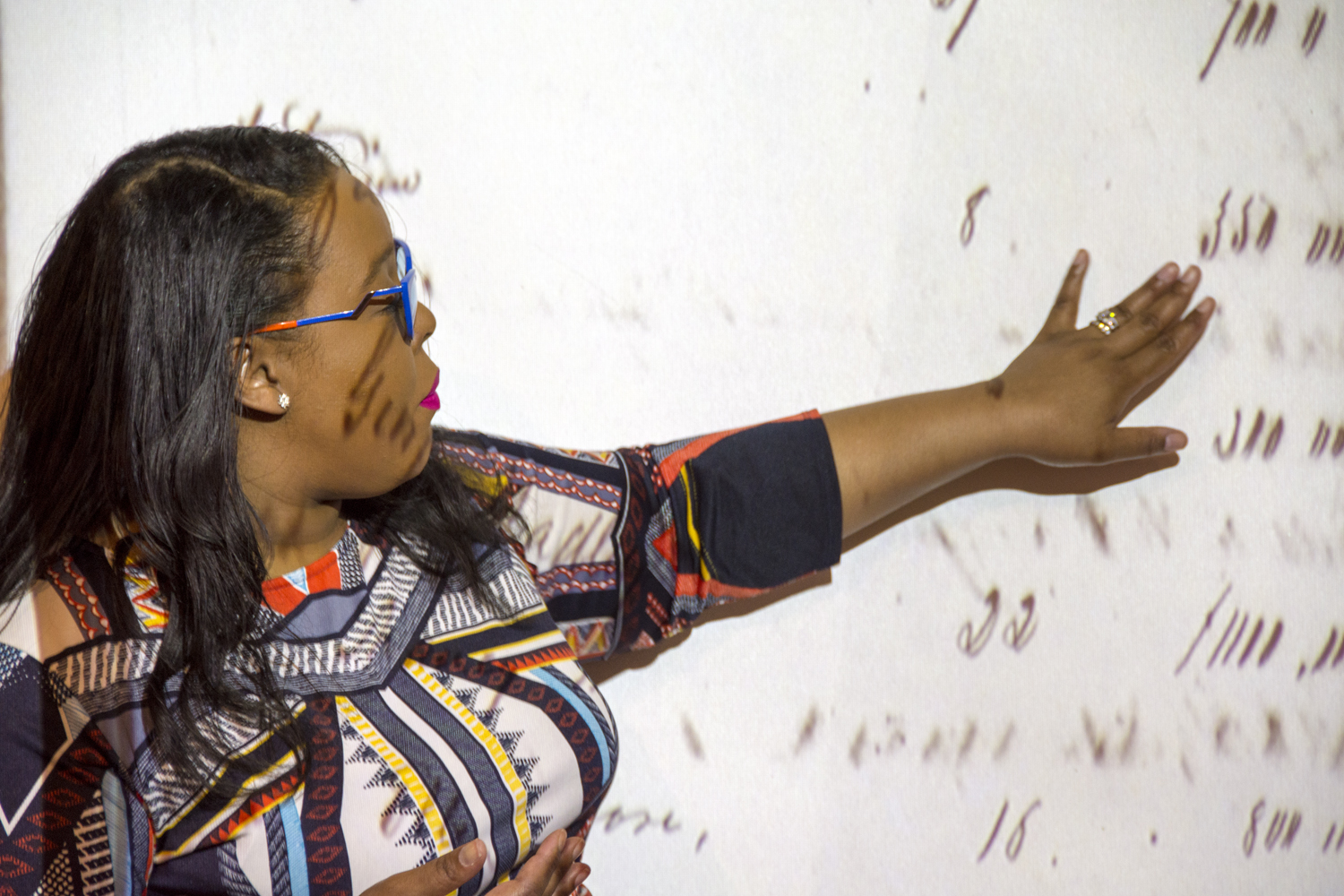 Do you think the exploitation of slaves by white woman in history has implications that can still be felt today?

Absolutely. When we reckon with white slave-owning women's profound investments in slavery, it becomes clear why so many of them committed themselves to post-Civil War white supremacist acts, systems, and movements. It begins to make sense why 500,000 white women joined the Ku Klux Klan and those who attended the thousands of lynchings of African-American men, women, and children carried out across the nation in the first half of the 20th century. It also reveals why white women, in the South and the North, were often at the forefront of the anti-integration movement during the Civil Rights Era. The history I present in this book drives home the point that these more contemporary investments form part of a much longer history of white women investing in white supremacy.

You're working on a new project that appears to be an expansion of this book - is it an offshoot? What can you tell us about your new research?

The second project is indeed an outgrowth of my first book. It is a comprehensive study of women, American slavery, and the law. It will explore this subject in the North as well as the South and begins in the 17th century and ends in the 19th. As I completed the research for my first book, I discovered that laws pertaining to property and slaves, legal instruments such as marital settlements (similar to modern pre-nuptial agreements), and women's use of southern courts were critical to their ability to exercise the kind of power that they did over the enslaved people they owned. I wondered if the same held true for the North, which had its own legacy of enslavement. I also began to see an important pattern in the legal archive: white southern women were talking about their moves Westward in the very moments that slave was expanding into the region. They underscored the ways that their legal title to property and their decisions to allow their husbands to use it in their new homes undergirded their spouses' speculative slavery-related business pursuits in the West and by extension, how they were fundamental to slavery's westward expansion. In a number of ways then, the second project is a prequel to the story I tell in my first book.

The stellar faculty in the Department of History were critical to my development as a historian.

Did your time as at Rutgers-Newark lead you to/prepare you for your current work in any way? If so, how?

The stellar faculty in the Rutgers-Newark Federated Department of History were critical to my development as a historian. I entered the M.A. program with a B.A. in psychology and while I took a few elective courses in history, I did not think like a historian. Professors Beryl Satter, Susan Carruthers, Stephen Pemberton, Karen Caplan, Eva Giloi, and James Goodman were key to my early training as a historian and I draw upon what I learned from them to this day. I also appreciated the fact the program offered courses in the evening, something that allowed me to complete my M.A. in two years while working full time.

Jones-Rogers graduated with an M.A. in History from Rutgers University-Newark (RU-N) in 2007, then went on to earn her doctoral degree in African-American History in 2012 from Rutgers-New Brunswick. In 2013, her dissertation won the Lerner-Scott Prize which is given annually by the Organization of American Historians for the best doctoral dissertation in U.S. women’s history.

Jones-Rogers began her career as an assistant professor jointly appointed in the departments of History and Women, Gender, and Sexuality Studies at the University of Iowa. She spent the 2013-2014 academic year at Tulane University as the Newcomb College Institute’s Post-doctoral Fellow in Law and Society. And during the 2018-2019 academic year, she also held the prestigious Harrington Faculty Fellowship in the History Department at the University of Texas, Austin.

Jones-Rogers is also the recipient of fellowships from the Hellman Foundation, the National Endowment for the Humanities, the Ford Foundation, and the Woodrow Wilson Foundation.