Alec Gates, Distinguished Service Professor in the Department of Earth and Environmental Sciences, has worn many hats over his long and illustrious career at Rutgers University–Newark, including various stints as department Chair, Director of the Graduate Program, and Vice Chancellor for Research. Since 2009, he’s also served as Executive Director, Garden State Louis Stokes Alliance for Minority Participation (GS-LSAMP), taking a central role in recruiting, mentoring and supporting under-represented minority college students in pursuit of careers in STEM fields.

For his decades-long commitment to RU-N and its students, Gates has won many awards and distinctions, including the Rutgers University Excellence in Service Award (2021) and the Clement Price Human Dignity Award (2019), and was named a Bright Spot in Hispanic Education, part of the White House Initiative on Educational Excellence for Hispanics (2015).

In fact, Gates has performed so much valuable service at RU-N that it's easy to overlook his teaching and scholarship. But a new book by the geologist, who specializes in tectonics, reminds us that he’s as engaged as ever in the classroom.

Earth's Fury: The Science of Natural Disasters (Wiley-Blackwell, 2022), is a riveting scientific look at tornadoes, floods, droughts, earthquakes, avalanches, volcanoes and the like, combining striking visuals and case studies aimed at making the book highly informative and enjoyable.

We sat down with Gates recently to discuss this exciting new project. 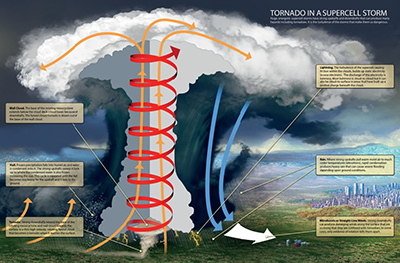 When did this book come together, and how long did it take to complete?
I’d had the idea for this book for many years and pitched it to Wiley in 2020, and they accepted it in about a week. It was my Covid pandemic project. It took about a year to complete.

What inspired it?
I have been teaching a Natural Disasters course for a number of years, but students did not find the textbooks very friendly or useful. I tried using the Encyclopedia of Earthquakes and Volcanoes that I wrote for Wiley starting back in 2001—there were four editions, and I worked on three—and the students liked it better. I asked a colleague at another college to try it, and he found it to work very well also. The problem is, an encyclopedia doesn't have the structure needed for a course; it can only supplement the lectures. The new book takes all of the advantages of the encyclopedia and a standard textbook and combines them for optimum effectiveness.

Who is the target audience for this book?
Non-science majors. Intro-geology course enrollments are, by far, primarily those students, and they are not used to science textbooks, which are complex and must be read in succession and all at once for a better understanding. This book is designed to better interest and to educate these students as well as the science majors.

I researched the wildest events I could find and wrote them into short, self-contained case studies with the science embedded into the story.

This book uses case studies as well, correct?
Yes. It primarily teaches the science this way. I researched the wildest events I could find and wrote them into short, self-contained case studies with the science embedded into the story. The stories are so riveting that they will keep the readers’ attention and encourage them to learn the science so they can better appreciate the story. In addition, there are highly illustrated double-page spreads of all of the hazards of an event, showing their temporal and spatial relations. The case studies describe each of these hazards.

And the stories are about what?
The case studies are exciting, real-life stories of wild results of earthquakes, volcanoes, tsunamis, hurricanes, tornadoes and other disasters, each illustrating one type of hazard. These are the wildest examples possible, with emphasis on recent events so they are more applicable to younger people. The story mode makes it easier for students to remember the hazard.

You reserved the last chapter for climate change. Did that pressing issue also help inspire this book and its timing?
Climate change was not originally the reason for the book, but it was added because it has become such an important part of society, and so students would better appreciate the seriousness of the problem. 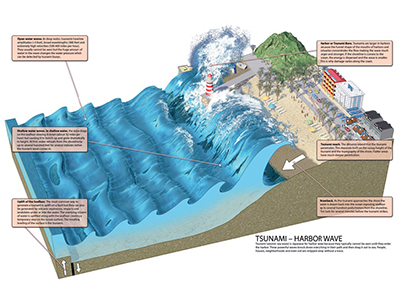 And you cover this topic in historical and current terms?
Yes. There are impressive examples of natural climate change that have devastated life on earth such as the Permian period [about 250 million years ago], which is the worst extinction event we can document. It was a case of natural climate change, and it wiped out 95 percent of marine life and 75 percent of terrestrial life but over a 10,000 year period. The current extinction will be much quicker.

Can you elaborate on that last sentence for readers?
The CO2 content of the atmosphere is increasing at a very fast rate, much faster than it can increase naturally. The rate even has been accelerating in recent years. Life on earth can withstand a certain amount climate change, but if it occurs too fast, it kills off everything. The Permian increase was 8–9 degrees over 10,000 years, and we are already up 1 degree in less than 60 years. If it continues at this rate, most of the life on the planet will soon be extinct.

What level of interest in this issue have you seen from students over the last few years, and since introducing this textbook?
Students at RU-N are very concerned about climate change. Many wonder if the world will persist long enough for them to have a life. Students from my department have attended demonstrations on climate change and served on environmental committees, including the Newark Campus Action Plan, which I co-chair. They are hungry to participate. It is our job [as educators] to help people make decisions on how best to help fight it.

Veering back to the new textbook: Do you think this has the potential to be adopted and used widely for undergrad non-major courses?
Good question. I’m hoping it takes off and is widely adopted at all intro levels. This is an experiment, and time will tell. I am currently writing another textbook on Environmental Science/Geology using the same general approach but emphasizing Environmental Justice. I have high hopes for it as well.

Thanks for sitting down with us.
Thank you.