Mark Di Ionno (SASN ’84) has received many honors during his nearly 40-year career as a journalist. He was a Pulitzer finalist for news commentary in 2013 for a collection of columns on Hurricane Sandy, the death of Tyler Clementi and other issues he wrote about for The Star-Ledger, and won the New Jersey Press Association Award for column-writing six times. In addition to gracing the pages of New Jersey’s largest newspaper with features, news and columns for 28 of those years, Di Ionno has penned three nonfiction books and two novels, The Last Newspaperman and Gods of Wood and Stone, and has taught journalism at RU-N as an adjunct professor.

In 2019 Di Ionno took a full-time job as Public Information Officer for the City of Newark. But his instinct for a great story has hardly waned, and recently he’s taken time off to volunteer on the border of Poland and Ukraine with Caritas, an international Catholic relief organization, offering humanitarian aid to Ukrainian refuges flooding into Poland and other European countries during Russia’s ongoing invasion of Ukraine, and filing stories for various outlets back home on what he’s seeing on the ground. He recently published a three-part series about his experience for the NJ Spotlight News website.

We sat down with him recently to find out what inspired him to volunteer his time and energy to a cause nearly 5,000 miles and an ocean away from home and family, what he’s seeing on the ground, his thoughts on NATO and the U.S.’s response to Russian aggression, and how he’s managed to, once again, get the story.

What inspired you to travel to Poland to help Ukranian refugees fleeing Putin’s invasion?
I came because I'm disappointed the United States and NATO didn't take a stronger stand, including air and sea support. Frankly, I'm disgusted. The U.S. has prepared for this very moment for 70 years, when Russia would invade a free, democratic European nation. Now it's here, and we are talking about sanctions and war-crimes trials while Ukraine is being destroyed.

You’ve seen war before, correct?
I was a Navy Corpsman in the post-Vietnam era and worked at the Philadelphia Medical Center, which was the amputee center for all services on the East Coast. As a result, I saw the residual of war up close as these men with lost or shattered limbs came in for second, third or fourth surgeries. There was also a psychiatric ward for men with PTSD and other war-related mental illnesses.

Were your work colleagues supportive of your taking time off to volunteer?
Yes, my employers, Newark Mayor Ras J. Baraka and Water and Sewer Utility Director Kareem Adeem, have been very generous to let me take time away. 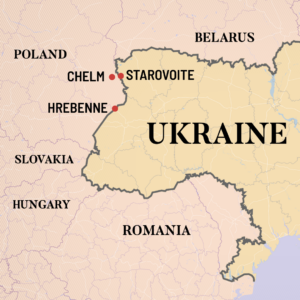 You’ve mentioned that you arrived in Warsaw with no plan, confident you would find volunteer opportunities. Sounds like that was the case?
Yes, I landed in Warsaw on March 9 with no plan except to go to a border-crossing and pitch in. I found the refugee reception point in Dorohusk [Poland] within minutes of getting to the border, and I stayed working there with Caritas for 10 days, with one day in Hrebenne [a border town 80 miles south of Dorohusk]. I came home on March 21 and returned 10 days later for a second round, and I'm still here. I’m supposed to stay until April 20, but I may extend.

In your NJ Spotlight News series, you offer a moving first-person account of what you witnessed primarily while driving Ukranian families from the border crossings to various points inside Poland. Have you had other duties?
My primary duties have been driving and loading trucks with food, clothes, baby products, medicine and equipment for the military bound for Ukraine.

You’ve logged many miles during your time in Poland and have been staying at a hotel in Chelm, 17 miles due east of Dorohusk, where many refugees have been staying. Was the room part of the arrangement with Caritas?
Yes. Caritas offered a room, but I felt it should go to one of the European college students who has been here. I have the means to pay my own way.

Was the entire trip on your dime?
My first trip was on my dime: airfare, car rental, lodging, meals, gas, etc. There were many occasions when I gave refugees a couple hundred Polish zlots—one zlot is about 25 cents in American money—because many had no cash or access to money. For my second trip, my kids and friends convinced me to make an internet funding plea [using GoFundMe]. I have to say, the people of Mountain Lakes, NJ, including many of my kids’ friends, met my goal in less than 10 hours. A high-school classmate of mine donated $5,000. I am dispersing this money in donations to organizations like Caritas, Polish Humanitarian Action, and the Folkowisko Foundation, where I will work next week, and giving the needy Ukrainians some cash.

Did you go into the trip thinking you’d write about it?
Actually, I did not come to Poland to write, but the experience is too heartbreaking to not share. These people are traumatized, especially the children, but are showing tremendous courage and resilience. Despite leaving their husbands, homes and country, these women still laugh and are graciously thankful for all the generosity that comes their way.

The Polish people's generosity is without boundaries. They have responded to this crisis with the force of compassion and empathy.

Nevertheless, you managed to get some very intimate stories and photos of these families fleeing Ukraine. How did you go about doing that?
I told them I was a former journalist and contemporary author, and showed them my webpage to build trust.

Did you have help from interpreters?
Mostly, I had an interpreter named Kasha, who is a receptionist at the hotel I stayed at. She speaks fluent English and has helped me with Polish speakers and has gone out in the field with me. At every checkpoint, the Polish have provided Ukrainian translators: Kasha would translate my question to Polish, the Ukrainian translator would ask the refugees, then translate the answer back to Polish, which Kasha would translate back. I kept my questions very basic for this reason. I also used Google translation on my phone.

And one afternoon you actually crossed the border into Ukraine with a Polish aid worker.
I basically stuck a toe into Ukraine and witnessed human herding on both sides of the border. These are orderly societies, and the people are respectful, even a little fearful of authority, so things are not chaotic, but still, the endurance of these people, many of whom travelled 27 hours by bus or train to get to Poland from the eastern sectors, was remarkable.

There are refugee–processing checkpoints not only at the border but in many parts of Poland, I imagine.
There are many. About 3.5 million people have come through Poland, and there are volunteers at every border crossing, at all rail stations and bus terminals. The Polish people's generosity is without boundaries. They have responded to this crisis with the force of compassion and empathy. Remember, being abandoned by the West and sacrificed to the ambitions of, first, Hitler, then Stalin, is part of their history. They know how Ukrainians feel. They also are afraid Putin will come here next, and they fear that NATO will not intervene.

What was the hardest thing about leaving and returning home for that 10-day period between trips?
At home everything seemed frivolous, culminating with Will Smith slapping Chris Rock [at the 2022 Oscars]. This was the big topic in the U.S. while Ukrainians are getting bombs dropped on their heads. This crisis has pulled me in, as a human being and a journalist.

Are you envisioning doing any future stories, or possibly a book, about this experience?
I’m looking to do a medical mission in Ukraine. I will write additional stories if that happens.

Thank you for speaking with us.
Thank you.