Assistant Professor Alex Dika Seggerman is an art historian in the Arts, Culture, and Media department in the School of Arts & Sciences at Rutgers University-Newark. Dr. Seggerman's first book, Modernism on the Nile: Art in Egypt between the Islamic and the Contemporary (UNC Press 2019) is a deep dive into the modern art and visual culture of Egypt from the nineteenth through the mid-twentieth century. In it, she argues that Islam is a constitutive factor, yet not the sole defining factor, in the arts of modern Egypt.

Q. How does your research inform your teaching and service at the university?

A. In my classes at Rutgers-Newark, I present the culture of Muslim societies as neither “other” nor solely of the past. Rather, I introduce students to the complexities of how Islam and modernity have interacted in the arts over the last two centuries. Because Rutgers-Newark has one of the largest Muslim-American student populations in the United States, the student body itself demonstrates a synthesis and diversity of Islam and modernity. My students often bring to class a deep knowledge of the religious practice of Islam. I encourage them to share this knowledge with their classmates, and we build on this understanding to explore art and architecture of historical times and faraway places, including the Dome of the Rock (Umayyad Jerusalem, 691), the Shah Tahmasp Shahnama (Safavid Iran, 1545), the Taj Mahal (Mughal India, 1653), and the paintings of Osman Hamdi Bey (Ottoman Turkey, c. 1900). I enjoy seeing the students build connections between their personal experiences with art and Islam in Northern New Jersey to a global array of places and eras. The connections they make in turn impact how I think about my own research, especially as I strive to make my work more accessible to a broader public.

My next book project will focus on visual and material culture of Islam in the US, ranging from the eighteenth-century and nineteenth-century portraits of Muslim slaves to contemporary art in 1990s NYC to suburban mosques in New Jersey. My work challenges mainstream assumptions about Islam as a monolithic religion with one type of art production that is always deeply rooted in the past. My scholarship showcases that the art of Islam is thoroughly modern and profoundly diverse. RU-N’s unique student body inspires this work. 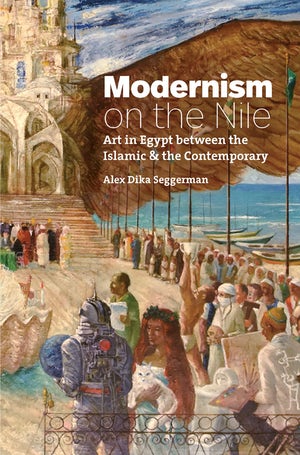 Q. How does this work advance the university's mission as a publicly-engaged anchor institution?

A. While my previous scholarship has mainly been targeted at a scholarly readership, I look forward to expanding my audience in the next stage of my career. Last fall, I published an online essay about the television sitcom, Ramy, written, directed, and starring former Rutgers-Newark student Ramy Youssef. This accessible new journal platform and popular subject matter reached a broader audience. In the 2021-2022 year, I will weave the threads of my research and teaching with RU-N’s student body and robust cohort of Middle East and Islamic studies faculty to launch a series of conversations around the theme of “Islamic Matters in Africa and the Colonial Atlantic.” Co-led by myself, Wendell Marsh (AAAS), and Sadia Abbas (English), the series will bring together interdisciplinary scholars focusing on the intersection of material culture and the religion of Islam in Africa and the Atlantic region. With these public conversations, we aim to leverage RU-N’s unique community to become a regional hub for the study of Islamic culture.

There is this We: Murals For Justice