Class of 2020: Tonie Lacy Uses Graphic Design to Examine the History of Black Farmers in America

Ever since she was a little girl growing up in Newark’s Central Ward, recent graduate Antoinette Lacy, who goes by Tonie, remembers being surrounded by people who loved the arts, and being passionate about them herself. She also came from a long line of Southern farmers on both sides.

This spring, the dual Graphic Design/Fine Arts major combined her artistic savvy and family history in an impressive senior capstone project focusing on the lineage and struggle of Black American farmers. Using the web, print and video, Lacy’s work, featured in Rutgers University–Newark’s 2020 Senior Graphic Design Exhibition, reveals the long-term effects of discriminatory practices toward Blacks within the farming industry while also highlighting their love and passion for the land. The result is a moving historical and contemporary portrait of an often-overlooked segment of the African American community.

“When most people think of Black farmers, they think of sharecroppers,” said Lacy. “But there’s a long history of farming within the community that goes well beyond that, and discrimination by the federal government that caused many to lose their livelihoods. I wanted to tell that story.”

Farming runs deep in the family. Lacy’s mother was born in Virginia and grew up in Newark, NJ, and her parents had farmed in Alabama before moving north with their kids. Lacy’s father, who grew up in Montclair, NJ, came from a family of North Carolina farmers and helped out on their land as a boy. And many of Lacy’s immediate and extended family members have thriving gardens.

When most people think of Black farmers, they think of sharecroppers. But there’s a long history of farming within the community that goes well beyond that.

Lacy, who is 32, also came up in Newark’s St. James AME Church. There she kept busy in its weekend and after-school youth programs, where arts and crafts were a mainstay, and was inspired by fellow congregants, many of whom either dabbled in creative pursuits outside work or pursued the arts professionally. Her mom, dad and older sister all draw and paint, and the family constantly did crafts projects together.

“It was such an open and encouraging environment, both at church and at home,” said Lacy.

As a teenager at St. James Preparatory School, Lacy learned about black artists and architects outside the white cannon and delved deeply into art and architectural history. She graduated in 2006 and entered Essex Community College that fall as an architecture major, studied full-time for a couple of years before running into financial problems, then took a leave and worked while taking occasional courses before returning full-time in 2015 and completing her associates degree in fine arts.

While at Essex, Lacy gradually realized her passion lay in design more than in architecture, and in 2016 she transferred to RU-N, hit the ground running as a Graphic Design major, and never looked back. She had found her calling.

“Graphic design combines architecture, design and the arts in a way that lets me use all my skills,” said Lacy. “Making the transition, everything just flowed nicely for me.” 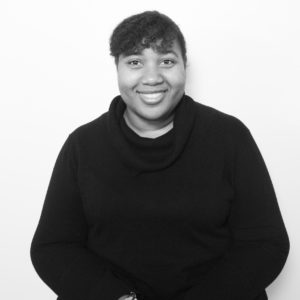 Along with graphic design, Lacy took a full complement of courses in RU-N's Arts, Culture and Media department, including art history, figure-drawing, painting, photography, 3D printing, illustration, painting and contemporary criticism. She also did a design internship with RU-N Visiting Professor Rebecca Jampol, handling branding for a new effort called the Newark Artist Database, and worked with Professor Ned Drew on his award-winning letterpressed children's book, Drew's ABCs. Along the way, she received the Anna & Harry Phillipson Scholarship for Music and Fine Arts, which helped pay her way through school.

When it came time for Lacy's senior capstone project, leveraging her love of history, her design skills and her family history seemed like a no-brainer. While farmers in general get scant mainstream media attention, she’d been hearing a lot about the plight of Black farmers in the news shows she was consuming online via TV1, Buzzfeed News, al-Jazeera, The Atlantic and other outlets. She tuned in to host Roland Martin on TV1, who interviewed John Boyd, Jr., head of the National Black Farmers Association and a leading voice in the seminal court case Pigford v. Glickman, a class-action lawsuit against the U.S. Department of Agriculture alleging racial discrimination against African-American farmers in its allocation of farm loans and assistance between 1981 and 1996.

Lacy also read the work of Associate Professor Monica White, a University of Wisconsin-Madison sociologist whose research engages communities of color and grassroots organizations on environmental justice and sustainable food community systems, and who has written widely on the history of Black farmers in the U.S.

“These shows and authors were giving Black farmers a voice. I thought that was important,” said Lacy.

Her project consists of three parts: an interactive, digital timeline highlighting key events related to black farmers, from chattel slavery to 2016; a 44-page book-collection of imagery and research chronicling the plight and legacy of Black farmers; and video containing interviews with Black farmers telling their stories. 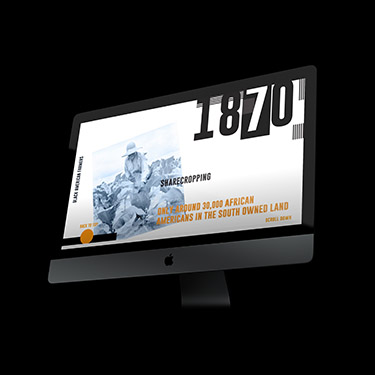 Lacy’s work is one of 23 transmedia projects in this year’s Senior Graphic Design Exhibition, titled REPRESENT, which focus on the profound and lasting effect representation has on identity from various perspectives, as seen through the lens of communications design. Associate Professor Jennifer Bernstein, who oversaw the exhibition with Jampol and co-led the senior seminar where seniors created their projects, noted how Lacy’s effort diverged from the norm.

“The work is beautiful. The subject matter is very unique,” said Bernstein. “Driven from her own personal history, Tonie shares the lineage and struggle of Black American farmers. From ownership to identity, three mediums address this narrative with designed ephemera and voices of the movement.”

Lacy is glad she went with her gut on this final project and took note of the historical tension in the Black community around farming, which further fueled her desire to go deep.

“Once I dug in, I dug in,” said Lacy. “Present-day farmers talked both positively and negatively about their experiences, about how many of their parents tried to talk them out of farming because of its association with slavery and sharecropping. But for many I spoke to, it was about their spiritual connection to the earth that mattered most.”

Due to Covid-19, this year’s Senior exhibition can be seen online and will be available in print version soon.