While Ashley Murphy was an undergraduate geology major at the University of Texas at San Antonio, a planetary geology professor visited her class and showed her a wide range of career possibilities, much wider than she anticipated. Although Murphy didn’t see stars that day, she certainly looked toward the heavens.

“This professor opened my eyes to other interesting things you can do once you have that base knowledge, including working for NASA,” she said. “I had no idea NASA employed geologists.”

Now a third-year Ph.D. student in Rutgers University–Newark’s Department of Earth & Environmental Science (DEES), Murphy is sharing that same message with undergraduates she teaches and mentors, while doing research that could one day uncover life on Mars. The department recognized both her teaching and research efforts recently by awarding her the first-ever DEES Research Fellowship.

The annual fellowship, which goes to both undergraduates and graduate students and includes a $3,500 research stipend, was made possible through the generous donation of an anonymous alumnus, who set up an endowment to benefit DEES students well into the future.

“I am grateful to be the first recipient of the DEES Research Fellowship, as it provides an opportunity to develop my skills as a scientific professional,” said Murphy. “Part of a science career is writing proposals for research funding, and it is encouraging to receive such an award and be able to use it toward completing my Ph.D.”

Most undergraduates don’t realize all the things you can do with a geology background...helping them see that and watching them get excited is really rewarding.

Murphy will use the award to purchase lab instruments and software for her research, where she uses modern analytical techniques to study ancient life in rock records in the lab of Professor Mihaela Glamoclija. Both are working to expand the definitions of biosignatures—or traces of life—by finding and characterizing new types of chemical and textural imprints of past life as an alternative to body fossils, which are less commonly preserved in very old, altered rocks.

In Murphy’s case, she’s been studying the composition of special rocks called stromatolites, which form when sediments bind in layers of sticky microbial material made mostly of photosynthetic bacteria. These layers lithify, or harden, over time when low heat and pressure compress the materials within. Unlike regular rocks, which contain sediment only, stromatolites boast these organics, which are biosignatures that can be preserved for millions of years in the best of circumstances, like fossils.

Murphy has studied newer stromatolites in the Bahamas and much older ones nearby in Hamburg, NJ. By examining the chemistry of both the carbonate rock and organic material within, Murphy can tell whether they underwent the same temperature alteration over time: When changes to the microbes and environment correlate, then she can reasonably assume the organic material is as old as the carbonate rock, while at the same time identifying the chemical composition of the organics. The stromatolites she found studied in Hamburg are from the Cambrian period—500 million years old—with the organics still intact, meaning she could then identify the biosignatures within.

“Most researchers study either the carbonate rock or the microbes, not both, and have assumed these really old Cambrian stromatolites don’t preserve this organic carbon, or biosignature, inside,” said Murphy. “We debunked this myth with new research techniques. By studying both, we can make strong claims about the age of the organics in the rock and better understand the biosignature within, and this has implications for studies of ancient life on earth and the search for life on Mars as we examine rock samples there.” 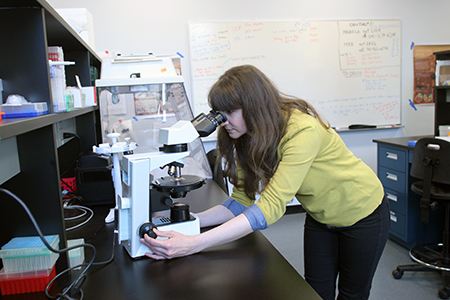 In fact, NASA has been funding Professor Glamoclija’s lab projects for years, and Murphy used NASA’s Goddard Lab in Greenbelt, Md., to process her research data from Hamburg, which she turned into a peer-reviewed paper that is expected to be published soon and that NASA has taken an interest in for how it relates to its work on Mars.

NASA’s next Mars rover mission, coming up in 2020, will land in a carbonate-rich area similar to those on Earth and will search for signs of life preserved in the Martian rock record. Murphy’s research may actually aid NASA scientists in this endeavor by providing by meaningful interpretation of possible biosignatures on Mars. Not surprisingly, she hopes to work for the space agency after finishing her doctorate.

Meanwhile back on Earth, Murphy loves sharing her passion for planetary geology by teaching intro and upper-level undergraduate courses and mentoring students in Glamoclija’s lab.

“Most undergraduates don’t realize all the things you can do with a geology background, and they’re unaware our lab does work that has implications for space research,” said Murphy. “So, when I tell them what we’re doing here and how it applies to other planets, they think that’s really cool. They see a pathway to planetary science, just as I did. And helping them see that and watching them get excited is really rewarding.”