Assistant Professor Angelo Soto Centeno, of Rutgers University–Newark’s Earth & Environmental Sciences Department, is an evolutionary biologist who studies recent mammal extinctions in the Caribbean. Specifically, he uses genetic, fossil and distribution-model data to examine how climate and habitat change affect bat populations on the island of Puerto Rico (PR), where he grew up. Soto Centeno has applied these tools to other systems—for example, rodents, cervids and amphibians—in island and mainland environments as well, and his research also extends to the demography, population connectivity, community composition and natural history of mammals of New Jersey.

When labs shut down due to Covid-19 and research samples became difficult to process, Soto Centeno and his post-doctoral fellow, Dr. Camilo Calderón Acevedo, got creative and launched a modeling project they could do from home, using landscape features to examine habitat suitability for bats across Puerto, a technique that could be applied to any species anywhere in the world. They brought in a colleague from Interamerican University of Puerto Rico, Dr. Armando Rodríguez Durán, and recently published their first of several research papers in the journal Nature.

We sat down with Soto Centeno recently to learn more about his research, along with the project and findings.

How did you become interested in bats?
Growing up in Puerto Rico, it was easy to be in touch with biodiversity. We had snakes in backyard, turtles left and right, lizards climbing up the walls of our house, and as a kid, the first bat I saw was a large Jamaican fruit bat that came and ate figs from a fig tree in our yard, just a couple of meters from me. They would get inside the house on occasion—jump right into the living room—and we’d open windows and doors and shoo them toward the openings with a broom. Bats are good at finding doors and windows when they’re trapped inside.

When did your academic work with bats begin?
When I got to college in 1995, in PR, I signed up for NSF-LSAMP first semester and worked with a professor who was a bat expert. I went on outings with his lab initially, then in 1997 caught my first bat for a research project of my own, which resulted in a paper I published. I also attended and presented at several North American Society for Bat Research conferences as an undergraduate before moving on to graduate school and jobs at natural history museums in San Diego and New York. 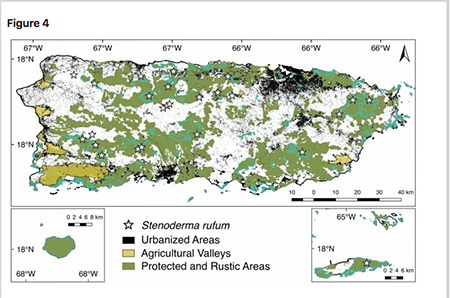 Most of us know of bats only from pop culture. What role do they play in ecology, why are they important, and why should be worried about their diminishing populations and/or extinction in PR and other neighboring countries?
Bats’ bad reputation comes mostly from their secretive lifestyle—most are active only at night and live in places that people consider scary. What many people don’t realize is that bats are incredibly important in our ecosystem in that they provide us with services we indirectly benefit from. For example, our local bats in NJ are all insectivorous; every night they eat thousands of insects that are straight-up annoying to us (like mosquitoes and flies) or can harm our agriculture (like moths and beetles). In some parts of the U.S., large colonies of insectivorous bats consume so many insects that they help us economically by acting as a natural pest-control agent so we don’t have to pump our fields with tons of pesticides. In tropical areas, nectar-feeding bats pollinate plants like bananas and mangoes, helping them produce fruits that we consume. Other bats eat fruit, dispersing the seeds of different plants and helping regenerate tropical forests.

Let’s turn to your latest research paper. What was the timespan for this project?
It was a year from inception to publication.

You looked at how human and natural causes of habitat fragmentation can lead to bat endangerment, which is key to understanding how our actions and natural processes can drastically affect biodiversity.
Yes. Animals have a very specific set of conditions that they can tolerate, where they can subsist, and those places can become fragmented by human activity and climate, especially hurricanes, which we see a lot of in the Caribbean.

In examining how bat habitats are distributed across PR, you used detailed survey maps that identify protected forests, rustic areas, agricultural sections, and human habitations, yes?  That’s right. Some of the largest protected forests in PR are in danger of becoming disconnected from more continuous forest patches due to increasing urbanization. And rustic areas are important because they’re under less pressure from development but can still be used for agriculture, and they offer suitable habitats for vertebrate populations and can improve connectivity between those protected forests.

So, you’re concerned about both the direct human footprint and the indirect footprint from global warming, in the form of increased frequency and intensity of hurricanes and other climate-related events?
Correct. PR, like other Caribbean islands, is subject to hurricanes, and many scientists believe that animals that live on these islands are resilient to these factors because they have a long history living with them, but our argument is: Not really. While these animals have lived thousands of years with hurricanes, they’ve lived only a few hundred years with the impact of human activity, and they may be more susceptible to climate events as a result. 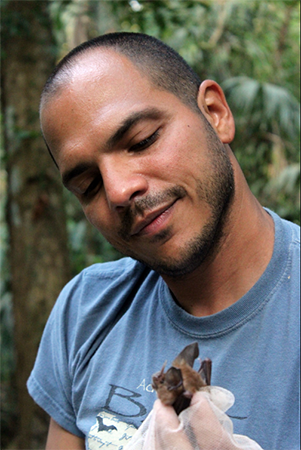 Tell us about your predictive modeling.
With our model, we look at the conditions of the environment where bats do in fact subsist, then create a model to predict where else we think they can survive or thrive. When we do this, we also understand the precise factors why an animal may not exist in a particular environment or habitat. Both pieces of information are important in helping us maintain and create connectivity for species to do well, regenerate their populations, and in turn experience more genetic diversity and a greater chance of survival.

And this applies to other animals as well, not just bats?
Yes, we can use the bat study to extrapolate for other species that require the same habitat and will also be affected by humans and climate events, not just bats but lizards, birds and others that are part of the food chain.

And the next step is to take your predictive modeling into the field and see how it holds up, correct?
That’s right. Our future papers will address this topic. If we do find these bat species in the places we think they’ll be, it vindicates our models, and if not, then that’s good data as well and leads to questions such as, Why isn’t this species here? What factors may be involved? How do we need to alter our modeling?

Do you hope to use this study and others to sound the alarm species endangerment and drive conservation and climate policy in Puerto Rico and elsewhere?
Our study and others can help drive conservation initiatives and policy change at a local level. Not many studies address these issues on islands—how species can be affected if habitat becomes increasingly fragmented. Our study and others highlight the importance of protected areas, but ours also emphasizes how unprotected forests can help increase the connectivity among large patches of preserved forests that are important for biodiversity. While these studies teach us an important lesson about how to best preserve habitat for biodiversity, I still feel that we have a ways to go. Our next steps should focus on ground-truthing the models we produced, expanding them to explore how other species may be affected by habitat fragmentation, and disseminating these findings to the public to start promoting change at the local level. The local work we have done on Puerto Rico certainly can serve as a model to implement on other Caribbean island systems to better understand biodiveristy and develop conservation strategies.

Thanks for sitting down with us.
My pleasure.