The parents of Carlos Medina (SASN ’89, NLaw ’92) like to tell a story of how one day as a 5-year-old, he boarded a New Jersey Transit bus and told the driver to take him to Hollywood.

Little did they know he would one day have his own TV show.

Medina is Creator, Executive Producer and Host of the popular Qué Pasa NJ television show on NJ PBS, now in its third season, which features in-depth discussions with an array of Hispanic figures from the worlds of business, culture, politics, nonprofits and academia, as well as non-Hispanic influencers and allies.

“I started the show because there was not enough content telling the stories of diversity and role models for those in the Hispanic community,” said Medina. “My desire was to show positive contributions of Hispanics in New Jersey and the Tri-state area.”

What Medina leaves out is that he’s a role model himself.

A lawyer and successful businessman who is known in northern New Jersey for his civic involvement, Medina is a natural fundraiser, has sat on the boards of countless organizations, and supports many causes, none more dear to him than the Statewide Hispanic Chamber of Commerce of New Jersey, where he serves as President and CEO, helping small-business owners get started, running mentoring networks, advocating for Hispanic-owned businesses in Trenton, and creating mutually beneficial relationships between the business and nonprofit sectors.

Medina started his journey to regional prominence in Guttenberg, NJ, the youngest of three children born of immigrant parents from Cuba (his dad) and Puerto Rico (his mom). He was a social kid who mixed easily with any crowd, played baseball and football, and argued a lot with his teachers at Saint Joseph’s of the Palisades High School in West New York, the neighboring town.

“The nuns would always say, ‘You should be a lawyer,’ and my dad did as well,” said Medina. “They saw something early on.”

I started the show because there was not enough content telling the stories of diversity and role models for those in the Hispanic community.

At Rutgers University–Newark Medina loved history and majored in political science, living off-campus and spending time outside classes working various jobs to pay his tuition. When he segued to Rutgers Law School (in Newark), he finally immersed himself in campus life, participating in student government and serving as treasurer of the Association of Latin American Law Students. He loved the diversity at RU-N and saw it as a major strength of the campus, something that would stick with him as he moved into his professional career.

Medina liked criminal law and, after graduating law school, worked for Passaic County Superior Court Judge Nestor Guzman for a year. When a job he’d been seeking at the county prosecutor’s office fell through, he pivoted to corporate law, working as in-house attorney for MCPC Engineering in Hackettstown, NJ. Before long, several of the reserved, mild-mannered engineers at the firm began asking Medina to sub for them at business cocktail parties.

He was a natural for the role.

Gregarious with a warm smile and relaxed demeanor, Medina made friends easily, working rooms and bringing in projects for the firm, which he used as leverage to move up the ladder and become Senior Vice President of the company.

In 2009 he and some colleagues spotted an opportunity to buy Robinson Aerial Surveys Inc., a venerable aerial photography, engineering and topographical-mapping firm started in 1936, which had a long history working with state and federal government agencies, among other blue-chip clients. They completed the acquisition, and the rest is history.

Medina is currently President and majority owner of Robinson, which has expanded under his tenure to include construction management and geographical-information-system mapping and whose projects span myriad industries, including the transportation and utility sectors.

When asked if he ever imagined himself owning an engineering company, Medina replied, “No, it’s amazing, but I’ve been doing it for so long that people forget I’m an attorney.”

Back while he was still at MCPC, making the rounds at cocktail dinners, another dynamic took hold: Executives from other companies, agencies and organizations began asking Medina to join their boards, sparking an impressive run of civic participation that continues to this day.

Medina served as Chair of the Real Estate Subcommittee for the New Jersey Economic Development Authority, and has sat on the boards of the Hispanic Bar Association of New Jersey, local micro-lender the Intersect Fund, and the Super Bowl 2014 Host Committee. He’s also chaired or worked on several transition teams, including that of former Newark Mayor Cory Booker and Jersey City Mayor Steven Fulop.

Currently, Medina is a Board Member of Horizon Blue Cross Blue Shield, an Advisory Board Member of the NJ Salvation Army, a Trustee of the Hudson County Economic Development Authority, and a member of NJ Governor Phil Murphy’s ReStart the Economy Task Force and Commision on Puerto Rico. 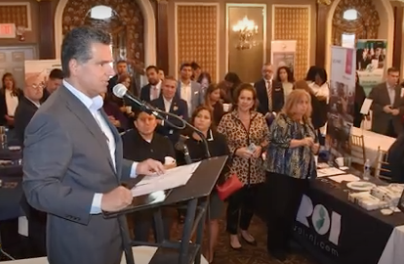 He has written op-Eds for the Star-Ledger, NJ Biz and Commerce magazine; regularly appears on English and Spanish TV news shows; and has been quoted by several publications, including the Washington Post and New York Times.

According to Medina, he’s really just following the example set by his father, Modesto.

The elder Medina emigrated to the U.S. from Cuba in the 1950s and rotated through a number of jobs before landing at The New York Times’ clipping archive department, where he spent more than three decades moving up the ladder and becoming head of the paper’s Hispanic Association, advocating for the hiring of Hispanic reporters and staff, and pushing for representation by people of color at the Times.

“Dad really was my role model. He was charismatic and met a lot of people coming through the Times, including Al Sharpton, Arthur Miller and Marilyn Monroe,” said Medina. “He also held a fundraiser for Caesar Chavez when he came to the paper, and he knew Broadway producers and chefs who wanted to be reviewed. He did and received a lot of favors during his time there, while always advocating from inside the organization.”

By following in his father’s footsteps, Medina is not only extending the family legacy, helping countless people and businesses and ensuring more diverse representation along the way, he’s expanding the very concept of family.

“It’s always rewarding to help others, and feel their gratitude,” said Medina. “In the Hispanic Chamber of Commerce’s social media, we use the hashtag #familia, because it feels like being familia to all these members.”