Alumni Spotlight: Alan Weiss Marches to His Own Beat at the Top of the Consulting World

Alan Weiss (SASN ’68) recalls a key moment in his illustrious career some 34 years ago. After climbing the ladder at the international business consulting firm Kepner-Tregoe in Princeton, NJ, he relocated his wife and two children to Rhode Island to take a new job as president of a behavioral-testing firm, only to be let go 15 months later.

“I said to my wife, ‘I’m going out on my own. No one will ever fire me again.’ And that was the start of my career,” says Weiss.

He made good on his promise, going on to start Summit Consulting Group and becoming legendary by helping more than 500 organizations and thousands of individual consultants, keynoting major conferences around the world, and publishing more than 500 articles and 60 books, including his best-seller, Million Dollar Consulting (McGraw-Hill), now in its 25th year and fifth edition.

His journey from obscurity to the heights of his profession is the fuel he uses to inspire countless others to reach their potential. Along the way, he’s remembered his roots as a small Jewish kid in mostly Irish and Italian Union City, NJ, and as a highly motivated student at Rutgers University–Newark during the tumultuous late 1960s.

“Rutgers-Newark was my launch pad. It had a brilliant environment, not just in the classroom but also sociologically.  And I had great professors from the beginning,” says Weiss. “I loved the liberal arts approach. It was a wonderfully universal learning experience.”

Weiss, who is a spry 73, grew up in Union City, NJ, across the Hudson River from Manhattan, one of two children of a salesman father and a mother who worked as a school secretary. His family had little means, but Weiss was a clever and curious kid who was adept at sports and quick on his feet. At Emerson High School he served as student council president and editor of the newspaper, displaying early promise as a speaker and writer, which foreshadowed his remarkably successful career.

He arrived at RU-N in 1964, paying his way through part-time jobs, a partial scholarship and government loans. He had a passion for learning and dove into his classes with vigor, majoring in political science and minoring in geology, and being elected to a national political-science honor society.

I said to my wife, ‘I’m going out on my own. No one will ever fire me again.’ And that was the start of my career.

He also was active on campus, working with a student entertainment committee that put on shows featuring Jack Jones, Woody Allen and the Four Seasons, while climbing the ladder at the school newspaper, The Observer, first as assistant editor, then news editor, then editor-in-chief. During his tenure, he won first prize for editorial writing from the New Jersey Collegiate Press Association, and the staff won several more awards for sports and feature writing.

After graduating, Weiss married his high school sweetheart, Maria, and took a job as assistant manager for claims compensation at Prudential in Newark, staying there four years as he completed a masters degree in political science at Montclair State University at night. He then moved to the Princeton, NJ, office of Kepner-Tregoe, where over an 11-year period he rose through the ranks to become president of one of its divisions.

In 1983 Weiss moved to Rhode Island to become president of the behavioral consulting firm Walter V. Clarke Associates. He had a tense relationship with the owner, W. Clement Stone, however, and moved on after 15 months, which proved pivotal.

“When I told my wife I was starting my own business, she said, ‘Okay, forget about the mortgage, but you’d better get serious.’ And I did,” says Weiss.

He began by focusing on organization development. His first client was the big drug maker Merck, with whom he worked for 12 years, traveling all over the globe to consult with various divisions. That relationship, and the referrals he received from it, launched his independent consulting career.

He worked for dozens of other blue-chip companies during this time, including Hewlett-Packard, Marine Midland Bank, and HSBC, while getting a Ph.D. in psychology to better grasp the underpinnings of what he was doing and seeing.

“Consulting is not about analytics or data. It’s about judgment, and it’s about relationships,” says Weiss. “I had built my critical-thinking skills at Kepner-Tregoe and could figure things out quickly, and this is key.”

That led to breakthrough in his business model: After his run-in with Stone, Weiss moved away from time-based consulting, which incentivizes staying on the job longer than necessary to make more money, and opted for value-based consulting, a movement he helped pioneer.

“It’s unethical to charge by a time unit because a client deserves a speedy remediation of his or her problem,” says Weiss. ‘I’m more valuable the quicker I can get results for a client.” 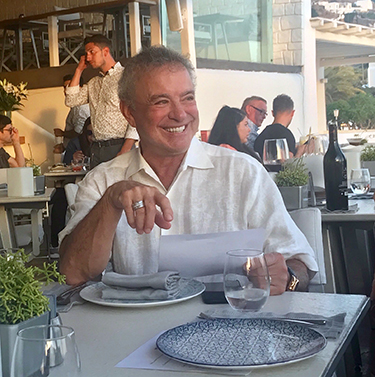 This approach has helped Weiss’ clients and his bottom line, and has given him more control over his discretionary time, which he sees as one of the key definitions of success so he can pursue other projects such as books and speaking engagements, along with a holistic lifestyle that involves travel, theater, scuba diving and more.

He’s been passing that lesson on to hordes of consultants across the globe, who pay top dollar to be mentored by him and attend his conferences and workshops, the most recent of which was in New York last month. He’ll be holding another in Washington, D.C., this month and one in Dubrovnik, Croatia, in September.

Meanwhile, his next book comes out this month, and he has tentative offers from publishers for two more books, one on fearlessness and the other on procrastination. “I think the title of the latter book should be, Read this Book Now or Maybe Tomorrow,” quips Weiss.

And in August he and Maria will celebrate their 51st wedding anniversary.

They have remained in East Greenwich, RI, and have two grown children, a daughter, 44, who is an independent film producer, and a son, 43, who is an actor and does presentation-skills training. They also have twin 10-year-old granddaughters and two dogs, Buddy Beagle and Bentley, a white German Shepherd.

As Weiss reaps the rewards of decades of hard work, he continues to pay homage to his “launch pad.”

“The Rutgers-Newark campus was diverse and very active when I was there. There were cultural events and protests, my professors were great, and Dana Library was magnificent,” says Weiss. “The sixties were the most exciting decade of my life, and Rutgers-Newark was a big part of it.”