The Rutgers University–Newark Fed Challenge team has a long record of success, in large part due to dedicated, hard-working students and the steady presence of Economics Professor John Graham, who has coached the squad since its inception in 2005.

But RU-N’s team, which has placed high in the nationals on several occasions, also has benefited from another secret weapon: alumni who have given their time and expertise to support the students.

Last Friday a panel of 11 alums stepped up once again by gathering to hear the team’s practice presentation ahead of the first round of this week’s New York District competition. The alumni, who work with major companies in the financial-services industry, joined together at the Bank of America tower near Manhattan’s Bryan Park for the session, which included a lengthy Q&A and critique of the team’s scripted talk and accompanying Power Point slides.

The event, which was once again hosted by Keith Banks (NCAS ’77), Vice Chairman and Head of the Investment Solutions Group at BofA, has become integral to the team’s success, and this year’s panel included several young alumni from recent teams.

It was great getting to practice in a professional environment, with alumni who have so much knowledge and experience.

“It was great getting to practice in a professional environment, with alumni who have so much knowledge and experience, before we have to do this at the Fed,” said team member Henry Sharum, a senior majoring in Economics and minoring in History. “It was also great getting feedback from previous team members who’ve been there before. All in all, just a great experience that should really help us in the competition.”

With the help of SASN’s Development office, Graham has run the team through these alumni prep sessions nearly every year since 2011, and the payoff has been huge.

Graham is happy with how this year’s group is progressing.

“This team started slowly, as several members were away for the summer, but once the school year got started, this team worked hard,” said Graham. “In the past two months, they put together a solid presentation with good data slides and have begun to demonstrate excellent teamwork.” 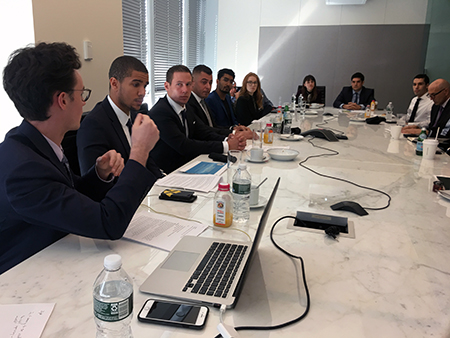 The College Fed Challenge is a national competition where in each round five-member teams play the role of a Federal Reserve board called the Federal Open Market Committee, which makes the nation’s monetary decisions. Team members give a 15-minute presentation, complete with Power Point slides of economic and financial data, and conclude with monetary policy recommendations.

A panel of judges from the Fed grills each team for 15 minutes on their presentation and policy recommendations, as well as the team’s overall knowledge of macroeconomics, Federal Reserve operations, and the major monetary issues currently facing the Fed. Each team is then scored in several categories, including teamwork, knowledge, and presentation skills.

This year’s RU-N squad will need to get through three District rounds to get to the national competition, held on November 23 in Washington, D.C.

The alumni at last week’s event have high hopes for the group and enjoy mentoring them.

"These kids have worked hard. I was incredibly impressed with their knowledge, maturity and poise,” says James Buro (NCAS ’78), a certified public accountant and Wall Street speaking consultant. “They can’t help but give you a strong sense of pride and optimism."

Meanwhile, event host Keith Banks is set to receive his own honor soon: On November 7, he’ll be inducted into the Rutgers Hall of Distinguished Alumni.

Senior Gifty Minnow Fuses Her Passion for Social Justice, Economics and the Law