Alumna Goes from Graphic Designer to Food Artist on ‘Chopped’ 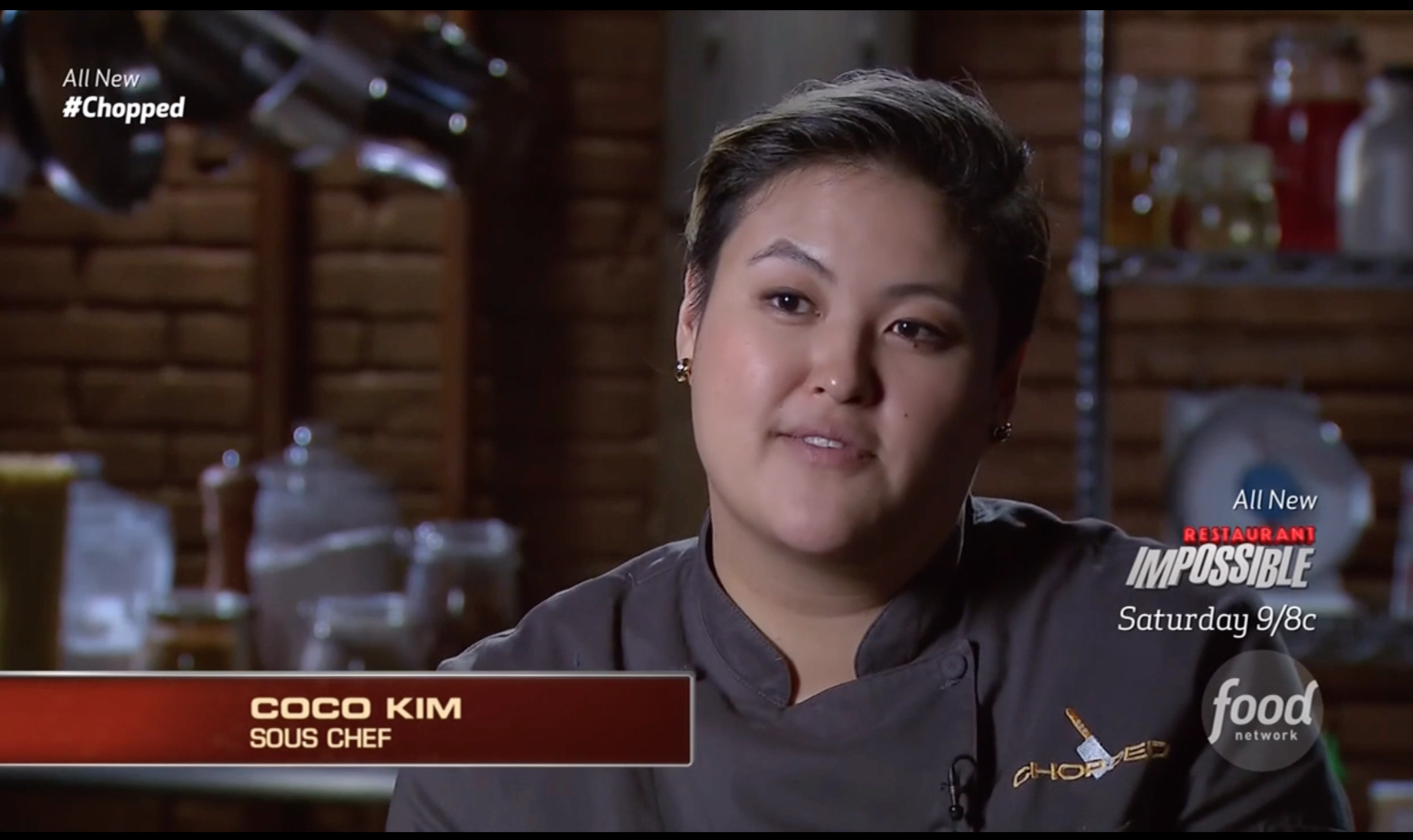 Coco Kim always loved cooking, but her family believed she should keep it as a hobby and choose a more stable livelihood.

So she set her sights on becoming a graphic designer, graduating from Rutgers University-Newark with a BFA in Graphic Design in 2012 and pursuing a career in visual design instead. For three years, she created graphics for various companies, including a stint at the Lincoln Center for the Performing Arts and as a visual designer for the Institute for Integrative Nutrition.

But the lure of the culinary world was too strong.  “Despite my love for design, I would obsess about food, restaurants, and cooking,” Kim recalls. “I would literally carry heavy cookbooks on my commute to work and read them like novels.”

She finally made the leap into the culinary world in 2015,  and hasn’t looked back since. On April 16, she made her TV debut on Food Network’s Chopped, competing against three other chefs for a $10,000 prize. On the show, four chefs attempt to make dishes from mystery baskets filled with specific ingredients, beginning with an appetizer round, followed by a main course, and then dessert. In each round, the lowest-performing chef is eliminated until only one remains. The episode Kim competed on was titled “Squab Goals” and began with a first-round basket containing squab, canned peanut soup, mustard greens, and salted peaches.

Kim made it through the first round with a seared squab that judge and chef Alex Guarnaschelli called “perfectly cooked,” but was eliminated during a tough main course round that included fluke, octopus balls, spaghetti squash, and sweet tropical punch.

We sat down with Kim to talk about her journey from design student at Rutgers to contestant on Chopped.

Can you tell us how you went from graphic design to cooking?

I always loved cooking but my family (especially my mom) always told me to just leave it as a hobby. I worked as a Graphic/Visual Designer for about 2-3 years. At my last design job, I was a bit fed up and was yearning to be a part of the culinary world. I applied to many places expressing my interest although I did not have any experience and one restaurant, Huertas, responded. I trialed there twice and I was hired as a prep cook and worked my way up to line cook and then sous chef within a year and half. I worked there for about three years.

My mom thought I was crazy that I made the leap because I was getting a third of what I was making as a designer but I didn't care. I loved every minute of it. It doesn't mean it wasn't hard. There were many sacrifices that had to be made for me to get here. Then, I had to take an abrupt year off from the industry because my mom wasn't feeling well. After about ten months, I decided to go to culinary school at International Culinary Center, which I am currently attending. I always wanted to go to but couldn't afford it. I was finally able to go with the help of scholarships and a GoFundMe page that my close friend made for me. Many people, surprisingly, were willing to support me and see me through school. I was able to finish my payments to school few weeks ago.

I am at my fourth month of classes and after that it's externships. I feel very blessed to be where I am right now.

Do you have a signature dish? Or something in particular that you love to make?

My favorite dish to make and eat is this simple Korean beef and radish soup called moo guk (무국). It's like my chicken noodle soup and whenever I make it or eat it, I get teary.

How did you end up on Chopped?

I was scouted at Huertas.

Huertas has an open kitchen so anyone can just come and watch. The person who scouted me had a meal there that night and approached me asking if I would like to be on television. I initially said no but saw that it was a recruiter for Chopped. She said they wanted more women and thought  I would be a great contestant. It was really random and unexpected.

What was the experience of being on the show?

It was a really great experience. I was extremely nervous because I was competing with chefs that have been in the industry much longer but everyone was very nice and respectful. I was definitely star struck and had little to say to the judges.

What was the most stressful part of the competition? The most fun?

The stressful part was the HUGE FISH! At that time I didn't know how to breakdown a flatfish but now I find butchering a lot of fun! Also, to think of a dish that is delicious with all the ingredients was really difficult. Just being in the competition and experiencing it was so fun. 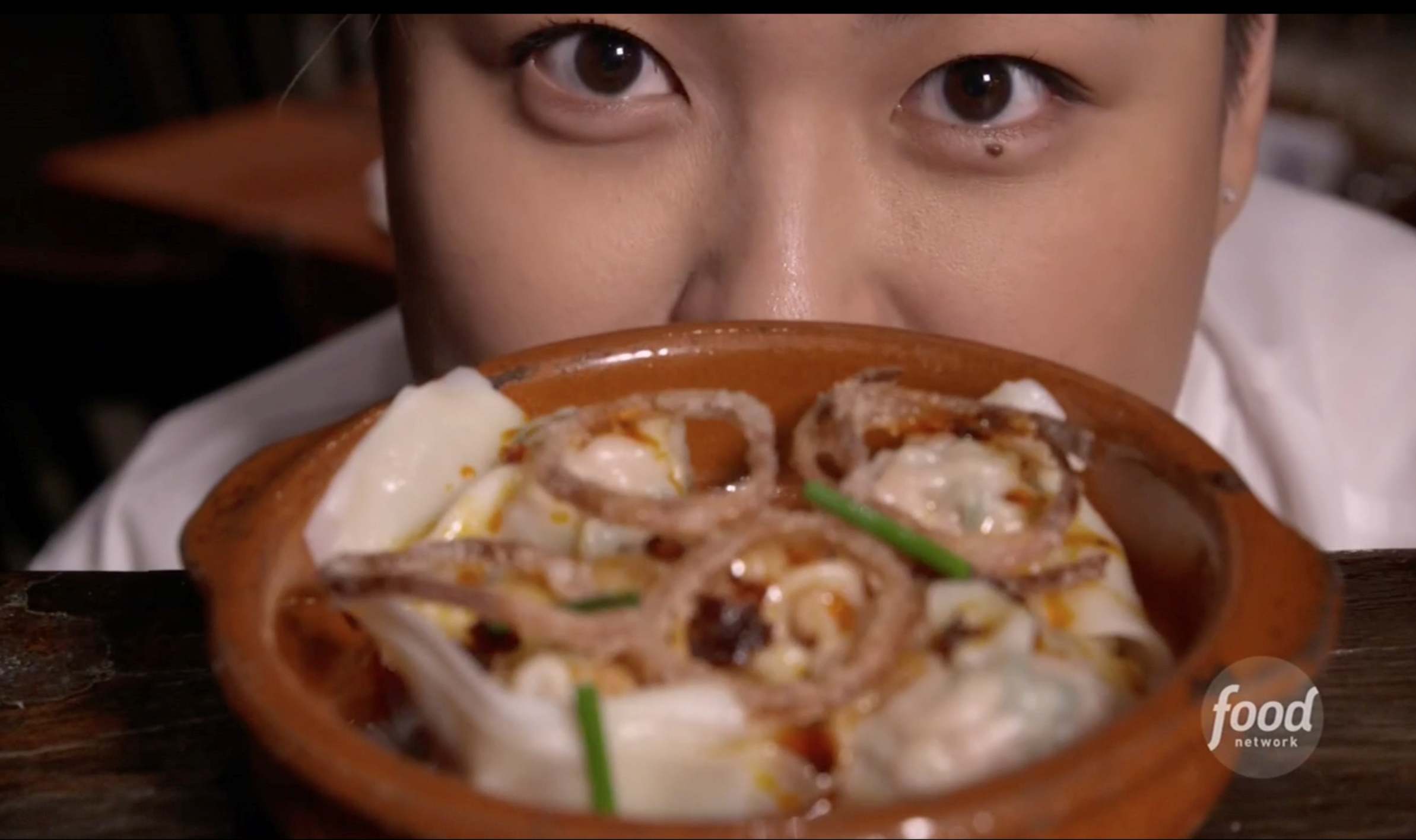 Anything you would do differently if you had the chance?

I would probably have similar dishes but more refined. I'm happy with what I gave at the time.

You’re currently enrolled at the International Culinary Center. How is that going and do you have any thoughts about your next steps after graduating?

I am in the Professional Culinary Arts program at ICC. I love it so much. I don't have any externships lined up yet but my end goal is to teach inner city children and teens how to cook affordable, healthy, and delicious meals. However, it will take a bit of time to get there. I am looking to work in higher end restaurants to get more experience.

Is there anything from your experience at Rutgers that you took with you into your new career?

If it wasn't for the professors and students in the Arts, Culture & Media department, I honestly don't know where I would be. We were in environments where we could openly give constructive criticism and grow. That helped me grow as a person and a chef by always seeking feedback so I can be better.