Alex Hinton Examines White Supremacy and the Threat of Genocide in the U.S.

Alex Hinton is a Distinguished Professor of Anthropology at Rutgers University–Newark, Director of the Center for the Study of Genocide and Human Rights, and the UNESCO Chair on Genocide Prevention. He is the author of more than a dozen books, including the award-winning Why Did They Kill? Cambodia in the Shadow of Genocide (California, 2005), Man or Monster? The Trial of a Khmer Rouge Torturer (Duke, 2016), and The Justice Façade: Trials of Transition in Cambodia (Oxford, 2018).

In March 2016, he spent four consecutive days at the U.N.-backed Extraordinary Chambers in the Courts of Cambodia (ECCC), giving expert testimony at the trial of senior leaders of the Khmer Rouge—including Pol Pot’s second-in-command, 89-year-old Nuon Chea (the infamous “Brother Number 2”)—who from 1975 to 1979 carried out one of the worst genocides in human history, killing an estimated one-fourth of Cambodia’s population, or some 3 million people.

In the last several years, Hinton has turned his lens on the U.S., examining the white-supremacist movement galvanized by President Donald Trump and aided and abetted by the Republican Party. That research has culminated in a new book released just this month, titled, It Can Happen Here: White Power and the Rising Threat of Genocide in the U.S. (NYU Press, 2021), which is, in part, based on his lectures and class discussions at RU-N.

We sat down recently with Hinton to discuss the book, the history of U.S. white supremacy, and the threats it currently poses in the U.S.

This book has an interesting structure. Can you tell us about that?
It Can Happen Here is written in a narrative chronological format that begins on March 14, 2016. On that date, then candidate Donald Trump was giving a stump speech in which he told an anti-immigrant parable about “the Snake.” At the same time, I was testifying at the U.N. Khmer Rouge tribunal in Cambodia as an expert witness on the charge of genocide. The book is, in a way, a conversation between the lessons of the past and the Trumpian present, one that includes chapters set in the Rutgers-Newark classroom. There are chapters that discuss Charlottesville, Va., the Tree of Life Synagogue and El Paso, Tex., Walmart massacres, and the George Floyd structural-racism social protests. And I was able to touch very briefly on the January 6 U.S. Capitol Insurrection in the book’s preface, which took place after I had submitted it to NYU Press.

You’re an anthropologist who specializes in genocide, and your book’s title postulates that the U.S. could actually end up in that dire place. What do you say to those who claim that kind of leap is preposterous?
My first response is, “Read the book!” My hope is, of course, that a wide range of audiences with consider the issue that the title poses—it can happen here. The “it” is mass violence, including its most extreme manifestation in genocide. In the end, the argument that “it can happen here” is not hard to make. U.S. history is marked by a wide range of what some scholars call atrocity crimes: war crimes, crimes against humanity, and genocide. And, by the end of the Trump administration, the measures that scholars use to assess risk, which include things like upheaval, past atrocity crimes, the erosion of buffers, and catalysts, all suggested the U.S. was at strong risk of atrocity crimes. 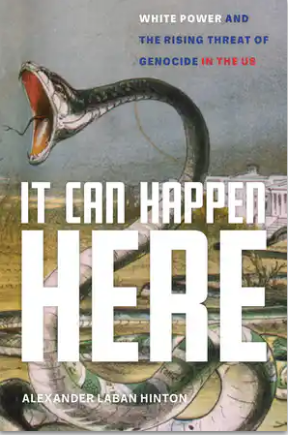 As you mentioned, you’ve studied Cambodia and other hotspots, in addition to the U.S., and link race-baiting, fear-mongering and grievance politics with full-fledged social movements. Can you elaborate?
History is filled with examples of regimes demonizing groups on the basis of their identity, in part by drumming up fear and resentment against them. The Nazis scapegoated Jews in this manner. So, too, did Stalin, Mao and Pol Pot. In fact, all of these regimes demonized “enemies of the people,” a phase Trump also invoked. But it’s not just Trump. A number of far-right parties around the world are doing this now. It’s a dangerous political tool in the arsenal of demagogues and a cause for alarm—another line of connection my book explores as it makes the case “it can happen here.”

How do you view the connection between U.S. white supremacists and formal state power like political parties, the police, courts, military, etc., both historically and today?
That’s a good question and one that a number of It Can Happen Here chapters explore, especially the first chapter, “Charlottesville Teach-In.” Like several other chapters, “Charlottesville Teach-In” is narratively set in the Rutgers-Newark classroom and includes classroom dialogue. The chapter explores the origins of Charlottesville not just in terms of the groups involved but also the history of white-power extremism and systemic white supremacy, and how it is linked to the emergence of the socially constructed idea of race and different social and political institutions. In the 1920s, for example, the KKK had millions of members that included prominent political figures, members of law enforcement, the courts and so forth.

The message of the book is in the title. If we acknowledge it [genocide] has happened here before, we are in a much better position to make sure it doesn’t happen again.

You talk about how these folks fomented grievance politics and embedded them into formal state systems, and some of the strategies they’ve used.
Yes. Later chapters in the book illustrate how the Trump administration played on key white-nationalist ideas and grievances, which have been with us for a long time, like the idea of white genocide or demographic replacement (remember those “You will not replace us!” chants at Charlottesville?). Trump’s immigration and border policy directly spoke to this issue. Indeed, the person who oversaw this policy, Stephen Miller, was placed on the Southern Poverty Law Center’s list of extremists after they exposed e-mail in which Miller promoted white genocide ideas. To close, I should note that the “Charlottesville Teach-In” was one of the most memorable classroom sessions I have taught, and I’m glad that I was able to include the voices of my students in the book.

One of your graduate classes even used a U.N. Assessments framework to conclude that the U.S. is at an elevated risk for genocide and atrocity crimes. Explain that framework and conclusion, if you would?
That’s true. Another chapter is set in a graduate class, when I held a “Tree of Life Teach-In” after the synagogue massacre in Pittsburgh in 2018. At the time, polarization was spiking ahead of the mid-term elections. The students applied one of the atrocity crimes risk-assessment models they were studying to the situation in the U.S. Almost all agreed that the U.S. was at elevated risk for atrocity crimes; some thought the risk was quite high. And that was before the pandemic and ensuing economic collapse, George Floyd social protests, Lafayette Square, and the contested 2020 election that culminated in the Capitol insurrection. By fall 2020, the risk of atrocity crimes had spiked dramatically as I wrote in an October 2020 op-ed in Project Syndicate.

The Left has been trying to get the country to examine and make amends for its colonial and racist past—which you deem crucial—while the right uses it as a social-wedge issue. Drawing on other countries’ experience, what concrete steps would you have us take to face our past and move into a better future?
Scholars sometimes talk about such redress as “transitional justice.” It includes everything from criminal trials and truth commissions to educational initiatives, memorialization, and reparations. In another May 2021 op-ed, for example, I argued that the U.S. needs a Truth Commission on White Supremacy and Its Legacies, one that would look all the way back to 1492. It Can Happen Here takes up these issues and argues that the U.S. very much needs transitional justice. Such initiatives are, of course, often politicized, as is the case with current attacks on critical race theory in the U.S. But at this point it is clear that the U.S. needs to confront the shadows of the past to move forward in a better way.

Are you hopeful we can get there?
Absolutely. In many ways, this is what teaching is all about. The concluding chapters of It Can Happen Here point the way forward through discussion of issues like moral compass and dialogue. The message of the book is in the title. If we acknowledge it has happened here before, we are in a much better position to make sure it doesn’t happen again. Awareness, dialogue and critical thinking—the tools of education that I discuss throughout the book—are key tools in this quest of “never again.”

Thank you for sitting down with us.
It was my pleasure. Thank you.