Alumnus David Sloan (SASN ’76), who for several decades was an Emmy Award–winning Executive Producer at ABC News, has been giving back to his alma mater for years, propelling Rutgers University–Newark’s Journalism program into the digital era by donating funds for a multimedia journalism lab and cutting-edge newsroom-classroom.

Currently the Senior Executive Producer and Creative Lead of ABC News Studios, a producer and commissioner of feature documentary films, series and specials, Sloan found another way to serve students at RU-N recently when he spent a day on campus, taking part in an Honors College networking lunch and guest-lecturing for a Media Studies class taught by Instructor Larry Durst.

At the lunch, which was held in Esterly lounge in Engelhard Hall, Sloan was one of four alumni who fielded student questions on work/life balance, college experiences and career journeys, and other topics. The event, the third of five annual activities to connect alums with Honors College students, was part of the mentorship program of the Honors College Advisory Council (HCAC), a body composed of RU-N alumni. It took place as the Honors College celebrates its 50th anniversary this year.

In the afternoon, Sloan was introduced to a crowd of 20 Media Studies students in a lecture hall in the Life Sciences Building. Durst, an advertising industry veteran who is now a Ph.D. candidate in American Studies at RU-N, framed Sloan’s visit by identifying one of the core missions of the course: exploring how changes in Journalism are producing changes in storytelling.

You can’t find editorial people in streaming. At least I haven’t been able to find them.

“While we’ve been studying this, Mr. Sloan has been doing this. I hope this gives you a chance to think about being not only journalists but innovators,” Durst said before turning it over to Sloan, who started by briefly walking the students through his career trajectory, providing a road map for their own journeys.

Sloan, who graduated RU-N with a degree in Political Science, attended NYU Journalism School, then started as a reporter for the Star-Ledger before getting the chance to fill-in at Good Morning America’s research department, he said. He worked his way up the show’s pecking order during the 1980s, moving from Production Assistant and Researcher to Assistant Producer, Producer and Senior Producer, then moved to the primetime news show 20/20, where he spent two decades, starting as a producer and climbing the ranks to Executive Producer. (Sloan worked with top anchors, including Diane Sawyer, John Stossel and Barbara Walters and won nine Emmys, four Peabodys and a duPont Award during his tenure at ABC News.)

Sloan added that he had planned to retire at that point and possibly teach at RU-N when ABC News President Kim Godwin asked him to stay on and help her bring news programming to the Disney Company’s Hulu streaming service. (Disney owns ABC, Hulu and Disney+.) Sloan agreed and is now overseeing production of news-adjacent nonfiction, nonscripted storytelling for Hulu.

Sloan then spent a few minutes talking with the class about the challenges and intricacies of bringing broadcast news to streaming, starting with the fact that broadcast’s coveted 18-49-year-old demographic are no longer watching that legacy platform (two students raised their hand when asked; most of the class, on the other hand, watch or subscribe to Hulu). He continued by noting the different requirements for each platform: For broadcast, producers measure success simply by the number of eyeballs within that demographic that are watching a particular program, while success in streaming depends not only on viewer volume but also about the kind of viewing.

“We have to ask, Is our docu-series driving new subscriptions? And how long do viewers stay with it?” Sloan said. “I do four- and six-part series, and we often lose half of our viewers at the back end. And there’s something called volume efficiency: How much does it cost, and how much does it make?” 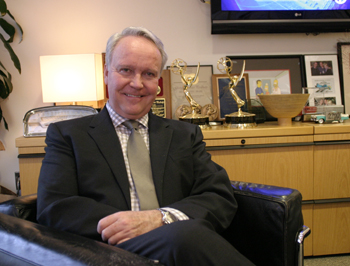 He added that not only are the metrics of streaming more complicated, but they’re also dictated by algorithms.

“You can’t find editorial people in streaming. At least I haven’t been able to find them,” Sloan said. “I thought surely I could talk to someone about content at a streamer, but no, you can’t. It’s all about the marketing lift, and the business affairs people will tell you, ‘Eighty percent of people who watched The Handmaid’s Tale are also going to watch this, so we think that that will be a hit.’ Sometimes that works, sometimes it doesn’t.”

Next, Sloan presented trailers from four of his recent projects and asked the students if they were a hit or miss with viewers, and why. That process yielded a series of in-depth discussions on cultural trends, metrics, editorial process and strategy, and programming decisions that provided a window into his role and the sweeping changes in the industry, including how news is moving away from curated, presented content (by anchors and reporters) toward the kind of immersive, documentary-style storytelling that does well on streaming platforms.

Sloan then launched into a Q&A session with the students, which covered topics such as internships at ABC (Sloan has a history of helping RU-N students land them), core journalism skillset requirements (writing, observation, grasp of pop culture, and situational awareness), and the importance of being open to all opportunities that come one’s way.

After the Q&A, students gathered with Sloan for a class photo, with some lingering to pepper him with additional questions before everyone finally exited the lecture hall.

Durst was pleased with the energy and excitement in the room.

“To a classroom of aspiring journalists, filmmakers and documentarians David’s visit was special on so many levels,” said Durst. “The behind the scenes stories of David’s career were fascinating, as were the sneak-peeks of some upcoming ABC News Studio streaming projects. But what was perhaps most inspiring to the students was the realization that David himself was once a student at Rutgers-Newark sitting in an introductory media class just like them, and wondering where his career path might take him. His presence in the classroom was proof to every student that there are no limits to their own aspirations.”

Not Yet 30, Alumna Makes her Mark in New Jersey Politics

At Institute of Jazz Studies, an Intimate Look at Count Basie