Join Dr. Steven Elliott for a discussion of his new book Surviving the Winters: Housing Washington’s Army during the American Revolution. 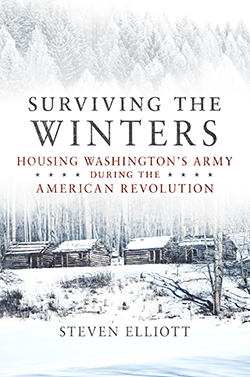 Surviving the Winters explores the intersections between war and shelter through a close study of the Revolutionary War Continental Army’s quarters. As much as food, weapons, or ammunition, access to clean and comfortable housing determined the army’s ultimate success in the War of Independence.

George Washington’s troops spent only a few days a year in combat. The rest of the time, especially in the winter months, they were engaged in a different sort of battle—against the elements, unfriendly terrain, disease, and hunger. Victory in that more sustained struggle depended on a mastery of camp construction, logistics, and health and hygiene. Surviving the Winters the book demonstrates that the winter encampments at Valley Forge, Morristown, and New Windsor stand alongside more famous battlefields as sites where American independence was won. Moreover, it points the way forward in new directions in military history research by fusing environmental, administrative, and operational perspectives into a unique study of military housing. 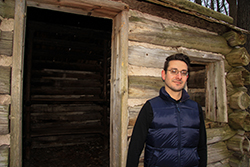 Steven Elliott holds a PhD in American Military History from Temple University.  His research, which broadly focuses on the social and administrative history of the Continental Army, has been recognized by awards and fellowships from the David Library of the American Revolution, The Fred W. Smith Library at Mount Vernon, the Society of the Cincinnati, the North Jersey Heritage Trail, and the New Jersey Historical Commission.  Steven currently teaches courses on national, local, and military history at Rutgers University-Newark.  In addition, he has also worked as a park guide and volunteer for the National Park Service at Morristown National Historical Park since 2009.