Rejections, Breakthroughs & Exhales: How to Persevere (A Virtual Panel)

Rejections, Breakthroughs & Exhales: How to Persevere (A Virtual Panel) 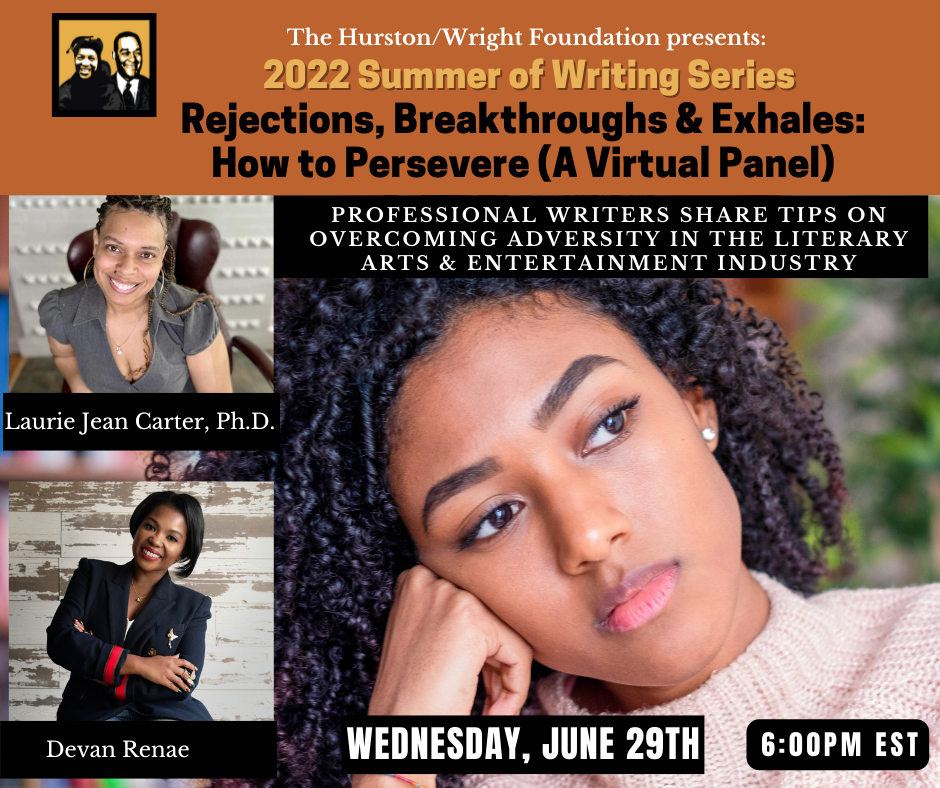 Info:  “Let me also be clear: Black writers do not want special consideration, we do not want special treatment, we want a level playing field, an equality of opportunity, the chance to write books and explore as many subjects and genres as our white counterparts. We want to look around and see other Black people being as successful as us in all different genres in all branches of the publishing business. And that is not the experience for most of us when we come to write our books or have them promoted or see them on the shelves.” -Dorothy Koomson in “Do Better Publishing People”: An open letter to the industry

Author Laurie Jean Carter and screenwriter Devan Renae share the ways they have stayed the course and pushed through adversity in their respective careers as writers.

This candid talk is part of the Hurston/Wright Foundation's Summer of Writing Series.

This virtual event is part of the Hurston/Wright 2022 Summer of Writing Series. From June 2022 to August 2022, we will be implementing 10 summer Writer's Week and Weekend writing workshop retreats virtually and on the campuses of Virginia Tech, Rutgers University and Howard University. Our summer fellows will have free access to our virtual and in-person events in the Hurston/Wright 2022 Summer of Writing Series that are also open and available to the public as well, some free and some for fee.

The Root listed Laurie Jean Carter’s memoir, Crave: Sojourn of a Hungry Soul, as one of the best nonfiction books by black authors in 2015. Kirkus Reviews described Crave as a “bold, honest, and courageous memoir.” Foreword Reviews listed Crave as an Indiefab Book of the Year 2015 finalist in the autobiography/memoir category. Additionally, Crave was named a finalist for the Library of Virginia People’s Choice Award for Nonfiction. Laurie Jean has published personal essays on poverty, domestic violence, and military sexual trauma in a number of publications, including The Rumpus, Good Housekeeping, andInk and Letters. She has presented talks, lectures, and workshops at numerous organizations, including the KGB Literary Bar, Girls Write Now, The Women’s Initiative, and West Point Military Academy. Laurie Jean is the Mellon Foundation Endowed Chair of English and Foreign Languages at Hampton University and a member of the creative writing faculty in Wilkes University’s MA/MFA Creative Writing Program. She is the nonfiction instructor this year for the Hurston/Wright Writer's Week Workshop Retreat at Howard University.

Devan Renea is a native of the Washington DC metropolitan area and holds an MFA in creative writing. She co-wrote two episodes of OWN’s legal drama series, Delilah, including the season finale. Devan was recently a writer in the writers’ room of the highly anticipated limited series, Iron Mike, starring Moonlight’s Trevante Rhodes. Devan’s other credits include work on the NAACP award-winning series Queen Sugar, produced by Oprah Winfrey and Ava DuVernay; the Saturn-award winning CW series Stargirl; and Freeform’s Teen Choice award-nominated series Famous in Love. She is the CEO of Boss Up Productions, a multi-platform production company. Devan also previously presided as the board Co-Chair/President of Black Employees at WB during her eight years at Warner Bros. She is the screenwriting instructor this year for the Hurston/Wright Writer's Week Workshop Retreat at Howard University.

The Hurston/Wright Foundation’s mission is to provide services, supports and opportunities that mentor, recognize and provide community for professional and aspiring Black writers. Workshops and classes taught by award-winning authors serve emerging and midcareer adult writers. More than a thousand Black writers have taken our classes since the first one in 1996, increasing diversity in the cultural community as they have gone on to create books and careers as professors, local cultural workers, and national thought leaders.

Our first program, the Hurston/Wright Awards for College Writers, has honored 92 students, 30 of whom subsequently published books. Among them are Tayari Jones (An American Marriage), Natalie Baszile (Queen Sugar,) and Nate Marshall (Wild Hundreds). The Legacy Awards has honored more than 400 writers since 2002. The annual program was the brainchild of the late award-winning novelist E. Lynn Harris, who recognized that work by Black authors deserved more attention. Free public readings and events since 2014 have afforded thousands of readers in Washington, D.C., the opportunity to engage with hundreds of talented Black authors.

Through a social justice lens, our work provides the necessary services, supports and opportunities for Black writers seeking to publish work within a publishing industry that has traditionally failed to publish work by Black writers proportionate to their population. We also recognize that our social activism aids in disrupting systems that hinder Black writers from having access to certain opportunities—from writing residencies to participation in quality writing workshops and craft talks. LEARN MORE AT HURSTONWRIGHT.ORG

Tags
Office of the Dean