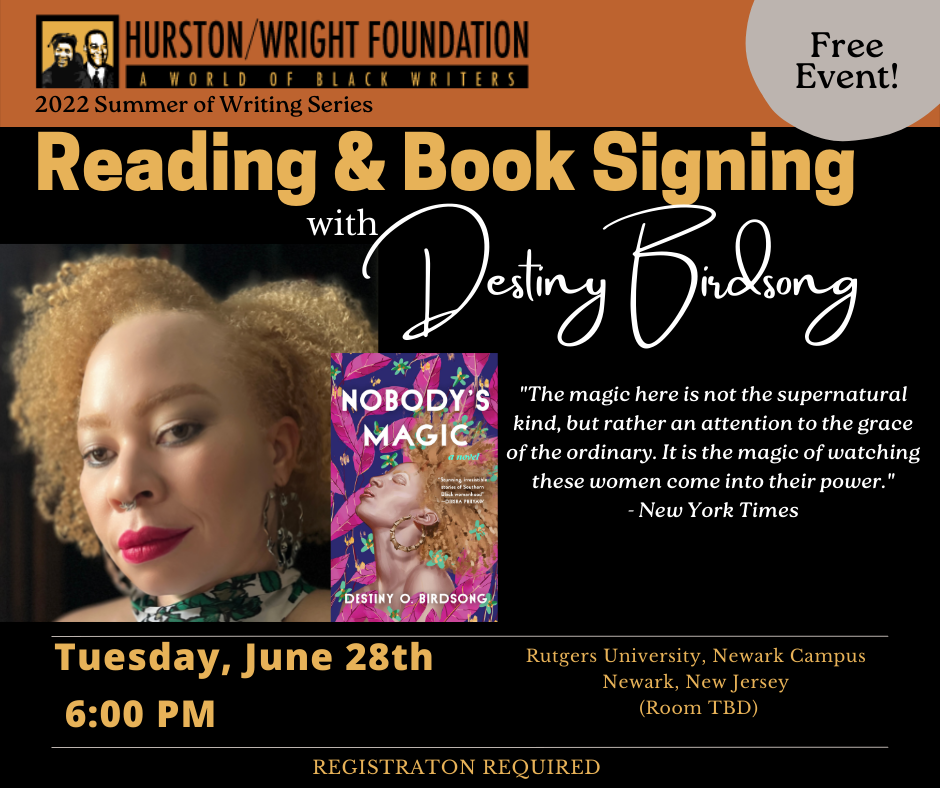 Destiny O. Birdsong is a Louisiana-born poet, essayist, and fiction writer whose work has either appeared or is forthcoming in the Paris Review Daily, Poets & Writers, Catapult, The Best American Poetry 2021, and elsewhere. She is the inaugural Hurston/Wright Writer-in-Residence at Rutgers University. Her debut poetry collection, Negotiations, was published by Tin House Books in October 2020, and was longlisted for the 2021 PEN/Voelcker Award. Her debut novel, Nobody’s Magic, is forthcoming from Grand Central in February 2022.

Every single person in this book has an understandable — though not always laudable — desire ... Even when, like Agnes, the characters mess up, we’re right there with them, understanding their motivation. Birdsong’s prose sings with a poet’s sensibility, so each story is carried along with pitch-perfect rhythm and nuanced understanding of human foibles. In the end, Agnes, Suzette and Maple are true to themselves, stepping into their own power and defying predictable solutions.

... stunning ... Birdsong is a masterful storyteller with a powerful voice that will keep readers captivated.

...with three young women so vibrantly portrayed, it’s easy to imagine a cult following ... these three women may have light skin, but they’re very much Black women. The complex dichotomy is fascinating terrain to explore, which Birdsong, herself a Black woman with albinism, does with poignancy and grace ... It’s an astute and moving meditation on the ways social and racial histories shape oneself ... These stories are meant to be read as separate panels, portraits of each of these women, which complement one another, sometimes drawing parallels yet always feeling distinct. The novel is satisfying when read this way: like one does a story collection, taking each on its own terms, then looking at the thematic overlap—of which here, there’s plenty ... These three women are so distinct and real they will undoubtedly be remembered by readers years later, the hallmark of iconic characters.

The Hurston/Wright Foundation’s mission is to provide services, supports and opportunities that mentor, recognize and provide community for professional and aspiring Black writers. Workshops and classes taught by award-winning authors serve emerging and midcareer adult writers. More than a thousand Black writers have taken our classes since the first one in 1996, increasing diversity in the cultural community as they have gone on to create books and careers as professors, local cultural workers, and national thought leaders. Our first program, the Hurston/Wright Awards for College Writers, has honored 92 students, 30 of whom subsequently published books. Among them are Tayari Jones (An American Marriage), Natalie Baszile (Queen Sugar) and Nate Marshall (Wild Hundreds). The Legacy Awards has honored more than 400 writers since 2002. The annual program was the brainchild of the late award-winning novelist E. Lynn Harris, who recognized that work by Black authors deserved more attention. Free public readings and events since 2014 have afforded thousands of readers in Washington, D.C., the opportunity to engage with hundreds of talented Black authors. Through a social justice lens, our work provides the necessary services, supports and opportunities for Black writers seeking to publish work within a publishing industry that has traditionally failed to publish work by Black writers proportionate to their population. We also recognize that our social activism aids in disrupting systems that hinder Black writers from having access to certain opportunities—from writing residencies to participation in quality writing workshops and craft talks.

Our newest program for writers is our Hurston/Wright Writer-in-Residence program that begins this year. Our inaugural Writers-in-Residence (WiRs) are Destiny O. Birdsong and Shayla Lawz. This program is sponsored in part by Amazon, Hachette Book Group and supporters like you. Learn more here.

Tags
Office of the Dean
Reading