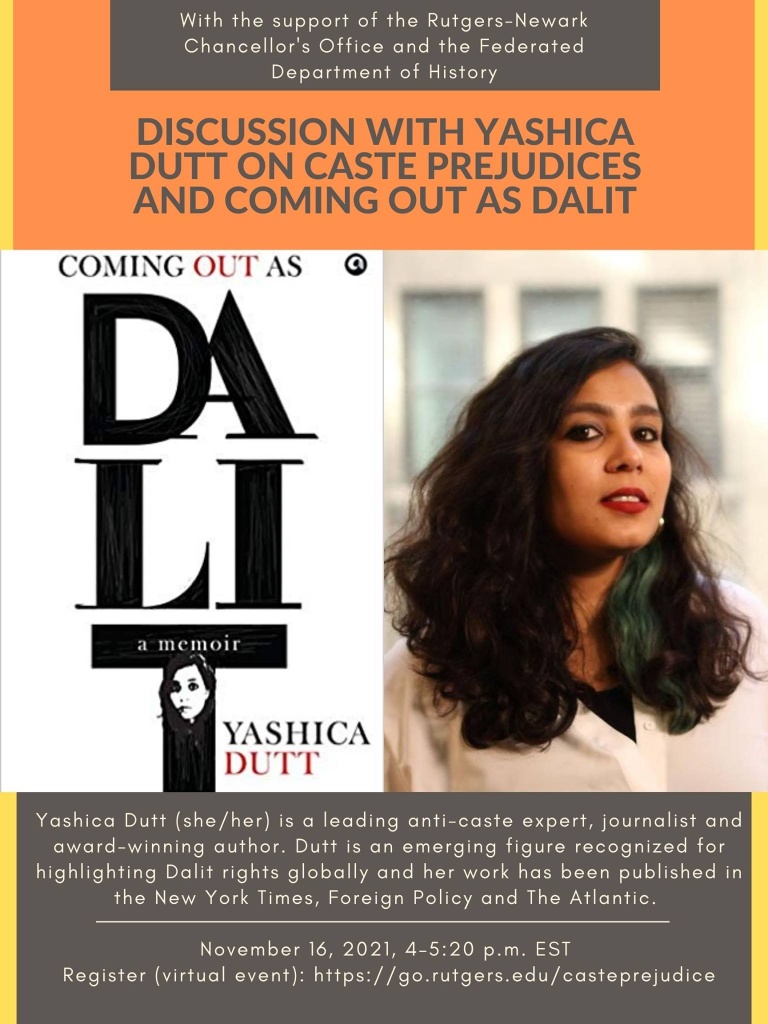 Join us on Nov. 16 at 4 p.m. EST, to learn more about caste prejudice, a form of discrimination in India and in the US in this discussion featuring  Yashica Dutt and co-sponsored by the Office of the Chancellor.  Register at https://go.rutgers.edu/casteprejudice.

Dalit student Rohith Vemula’s tragic suicide in January 2016 started many charged conversations around caste-based discrimination in universities in India. For Yashica Dutt, a journalist living in New York, this was the moment to stop living a lie, and admit to something that she had hidden from friends and colleagues for over a decade—that she was Dalit.

In Coming Out as Dalit, Dutt recounts the exhausting burden of living with the secret and how she was terrified of being found out. She talks about the tremendous feeling of empowerment she experienced when she finally stood up for herself and her community and shrugged off the fake upper-caste identity she’d had to construct for herself. As she began to understand the inequities of the caste system, she also had to deal with the crushing guilt of denying her history and the struggles of her grandparents and the many Dalit reformers who fought for equal rights.

In this personal memoir that is also a narrative of the Dalits, she writes about the journey of coming to terms with her identity and takes us through the history of the Dalit movement; the consequences of her community’s lack of access to education and culture; the need for reservation; the paucity of Dalit voices in mainstream media; Dalit women’s movements and their ongoing contributions; and attempts to answer crucial questions about caste and privilege. Woven from personal narratives from her own life as well as that of other Dalits, this book forces us to confront the injustices of caste and also serves as a call to action.