Culture for Cities? A Conversation about the Role of Arts in Baltimore and Newark

Are the arts good for cities? Are city policies good for artists?

Using Baltimore and Newark as case studies, this virtual event will examine how the role of the arts in cities has changed since the 1970s. What happens when the arts become part of redevelopment efforts? Who wins and who loses?

This event, which draws from Mary Rizzo's recent book Come and Be Shocked: Baltimore Beyond John Waters and The Wire, will feature a brief talk by Rizzo and a panel discussion with artists and scholars from Baltimore and Newark on the vexed relationship between cities and the arts.

Mary Rizzo is an Associate Professor of History at Rutgers University-Newark and a recent recipient of the Faculty Scholar-Teacher Award recognizing her years of work as a scholar and instructor. She works at the intersection of inclusive public history, digital humanities, urban studies, and 20th-century U.S. cultural history. She is the author of Come and Be Shocked: Baltimore Beyond John Waters and The Wire (Johns Hopkins University Press, 2020) and Class Acts: Young Men and the Rise of Lifestyle (University of Nevada Press). She is the founder of the Chicory Revitalization Project, which uses the black community poetry magazine Chicory to spur dialogue on place and identity. Follow it on Instagram @Chicory_Baltimore. She tweets as @rizzo_pubhist.

Nicole King | Associate professor and chair of the Dept. of American Studies, Director of the Orser Center for the Study of Place, Community, and Culture, UMBC

Nicole King received her PhD in American studies from the University of Maryland, College Park in 2008 and a MA in comparative literature and cultural studies from the University of New Mexico in 2001. Her research and teaching interests focus on issues of place, power, and economic development. King’s scholarship analyzes changes to the social and built environment during the rise of consumer culture in the twentieth century—such as the development of vernacular landscapes of tourism in the U.S. South and the decline of industrial neighborhoods in Baltimore. She is an editor of the book Baltimore Revisited: Stories of Inequality and Resistance in a U.S. City (Rutgers University Press, 2019) and the author of Sombreros and Motorcycles in a Newer South: The Politics of Aesthetics in South Carolina’s Tourism Industry (University Press of Mississippi, 2012). She co-founded the Baltimore Traces: Communities in Transition public humanities project where students work with local partners to research historic neighborhoods and complete oral history interviews focused on preserving the opinions of those who live and work in Baltimore. King’s research and teaching is based on the belief that looking and listening to a place can be a transformative act.

fayemi shakur is a writer, interdisciplinary artist, and arts advocate residing in Newark, New Jersey. She currently serves as Arts and Cultural Affairs Director for the City of Newark. She has held appointments as Visiting Lecturer at Rutgers University-Newark, Department of Art, Culture and Media and Artist Advisory Council Member for Newark Arts (2019). As a cultural critic and interdisciplinary artist, her writing has been featured in national and international outlets including The New York Times, Hyperallergic, CNN Style, VICE, The International Review of African American Art, Nueva Luz Photographic Journal, HYCIDE magazine, and MFON: Women Photographers in the African Diaspora among other books and publications. She has served as a leader in Newark arts community for over 15 years, previously as Executive Director at City Without Walls gallery; Marketing and Public Program Manager at Aljira, a Center for Contemporary Art; co-founder of The Annual Lincoln Park Music Festival; and a certified yoga and meditation instructor.

Emma is a working artist and writer as well as the co-founder of Gallery Aferro. Over the past decade, she has worked with co-founder Evonne M. Davis to develop hundreds of exhibitions, residencies, education programs, public art initiatives, as well as 22 publications. Many of these efforts have been highly collaborative in nature, involving other nonprofits and collectives. Wilcox maintains an artistic and curatorial interest in history, including the history of artist communities, as well as Newark’s overall history. As a photographer she is concerned with environmental justice, land usage, eminent domain, and the role of individual memory in the creation of local history. She was featured on Women in Photography, the New Yorker, American Suburb X, and Black and White Magazine, was reviewed in Art In America, and has written for Bomb Magazine, Zing Magazine, and Influence. She regularly leads gallery tours for all ages at Gallery Aferro, and is a frequent guest speaker for a variety of universities and other organizations including the NJ Historical Society.

Noelle Lorraine Williams is a graduate of the New School for Social Research and Rutgers University Newark. As a public humanities specialist, artist, researcher and curator, her work examines the ways African Americans utilize culture to re-imagine liberation in the United States. She has exhibited and lectured at the Newark Museum, The African American Museum in Philadelphia, Jersey City Museum, Skylight Gallery in Brooklyn and Cue Art in Manhattan. Her work as an artist and curator has been reviewed in the Star-Ledger as a part of their profile on “The Newark School”, New York Times, ArtNews, and other publications. She continues to make art, curate, teach and write about history, African American women’s lives and liberated communities in the United States. She currently serves as the Director of the African American History Program for the New Jersey Historical Commission. 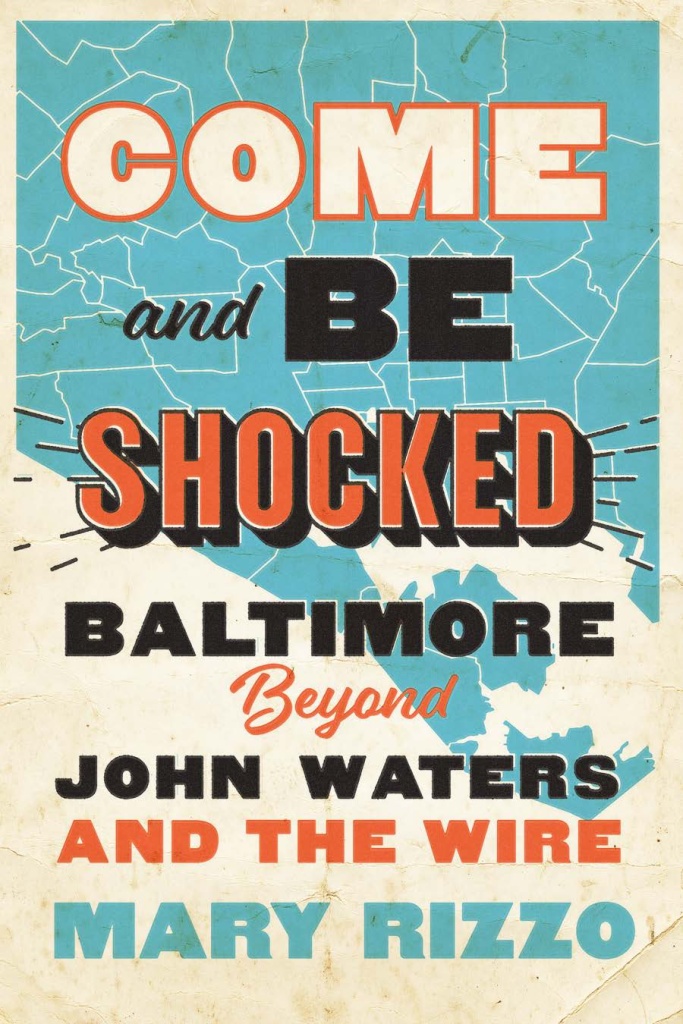 About Come and Be Shocked: Baltimore Beyond John Waters and The Wire

The city of Baltimore features prominently in an extraordinary number of films, television shows, novels, plays, poems, and songs. Whether it's the small-town eccentricity of Charm City (think duckpin bowling and marble-stooped row houses) or the gang violence of "Bodymore, Murdaland," Baltimore has figured prominently in popular culture about cities since the 1950s.

In Come and Be Shocked, Mary Rizzo examines the cultural history and racial politics of these contrasting images of the city. From the 1950s, a period of urban crisis and urban renewal, to the early twenty-first century, Rizzo looks at how artists created powerful images of Baltimore.

How, Rizzo asks, do the imaginary cities created by artists affect the real cities that we live in? How does public policy (intentionally or not) shape the kinds of cultural representations that artists create? And why has the relationship between artists and Baltimore city officials been so fraught, resulting in public battles over film permits and censorship?