The Honors College at Rutgers University–Newark was founded in 1972 as an honors program by the Rutgers University–Newark administration in response to the 72-hour-long occupation of Conklin Hall by the Black Organization of Students in February 1969. It provided enhanced academic opportunities, community, and support to a diverse rising population of students being admitted to the University through the state’s new Educational Opportunity Fund. At a time when Rutgers–Newark students – and even their student government – were divided into ‘day’ and ‘night’ cohorts drawn from Newark and towns throughout the region, the Rutgers–Newark Honors Program tried to foster a small college-like community among academically-focused students in both populations.

In the years that followed, the Honors Program grew to accommodate more students and new groups of Rutgers University–Newark scholars. The first class of James Dickinson Carr scholars, who were minority students recruited for their demonstrated academic promise, were automatically enrolled in the Honors Program, which was then headed by Dean Lydia Rodriguez. As one of our Carr Scholar graduates who had emigrated to the U.S. from Jamaica said, "the Honors Program gave me a great start in life and I absolutely devoured the additional challenges it provided."

The Honors College gave me a great start in life and I absolutely devoured the additional challenges it provided.

Students joined the program in their junior year and participated in two years of lectures, special events, and seminars where they were guided toward opportunities in nation’s top graduate, medical, and law schools.

In the mid 1990s, the Honors Program began requiring all graduates to write senior theses under the guidance of faculty mentors. Building on that accumulating record of undergraduate research and scholarly accomplishment, in the late 1990s Faculty of Arts and Sciences Dean David Hosford and Rutgers University–Newark Provost Norman Samuels elevated the honors program to be an Honors College that would enroll students from across all of the programs and schools at Rutgers–Newark.

Led by Dean Elizabeth Mitchell as a four-year program with its own curriculum, the new Honors College’s purpose was to provide a high-quality undergraduate education to diverse students who did not have the financial resources needed to attend more exclusive private colleges and universities. Provost Samuels also created the Provost’s Scholarship (now called the Chancellor’s Scholarship) to financially support incoming students in the Honors College, and the University proudly used the College and the opportunities it offered to recruit and provide socioeconomic mobility to talented high school and community college graduates from throughout New Jersey. The Honors student cohort soon grew from just over 100 students to more than 320.

In the 2000s, RU–N Chancellor Steven Diner appointed now-Vice Chancellor Dr. John Gunkel as director of the Honors College. The College was a partner in major research initiatives, including the launch of the Garden State Louis Stokes Alliance for Minority Participation (GS-LSAMP), a $5 million, five-year, multiple-school program funded by the National Science Foundation to increase the number of underrepresented students pursuing majors in the fields of science, technology, engineering and math (also known as STEM fields). The Rutgers–Newark Alumni Association and other graduates endowed scholarship funds to support Honors College students, and a new curriculum emphasized interdisciplinary studies in the liberal arts. The College’s offices were relocated to Engelhard Hall, where our largely-commuter student cohort finally gained a study lounge that today is a home away from home.

After Honors College Director John Gunkel became associate dean of Arts and Sciences, he was succeeded by Dr. Kinna Perry. Rutgers–Newark continued to be recognized by U.S. News and World Report as the most diverse college campus in the nation, and Honors College graduates won prestigious national fellowships and awards. Under Dr. Perry, the Honors College began hosting an annual poster exhibition where students across Rutgers University–Newark presented their research projects.

In 2013 Nancy Cantor was named Chancellor of RU–N and soon began planning a new Honors Living-Learning Community that builds off the Honors College’s documentable legacy of creating socioeconomic mobility among diverse students and will create a second separate ’honors’ track at Rutgers University–Newark.

In 2016, after a national search, Brian Phillips Murphy was named Honors College Director, the first person to hold that position who is also a tenured faculty member in an academic department at the University. With Assistant Director Jessica Zorola, he kicked off an inclusive year-long planning process with students, alumni, faculty, and fellow administrators in different schools across the University to refocus the Honors College’s mission, curriculum, and programming. The Honors College is supported by a critical mass of faculty, deans, and friends who recognize that our racially and economically diverse students still deserve support as they strive for excellence, and that the College is a vital catalyst to the research initiatives and humanities inquiry that enable our University to be an institution capable of answering the urgent questions of our time.

Students today join the Honors College because of their curiosity, academic interests, passion for deep intellectual engagement, and in search of a community and cohort that values and supports the same. Our 300 students come from 115 different municipalities and 28 of the 40 state legislative districts in the state, and our graduates win top national fellowships and admission to the best graduate and professional schools in the world. Our 1300 graduates are valued leaders in their communities and professions and proof that the Honors College is an engine of equity, mobility, and inclusive excellence for the families and people of the State of New Jersey.

The Honors College at Rutgers University–Newark is today the oldest established honors initiative at an urban public research university in the United States, and one of the few that strives to serve a population of primarily commuter, first-generation college and transfer students. 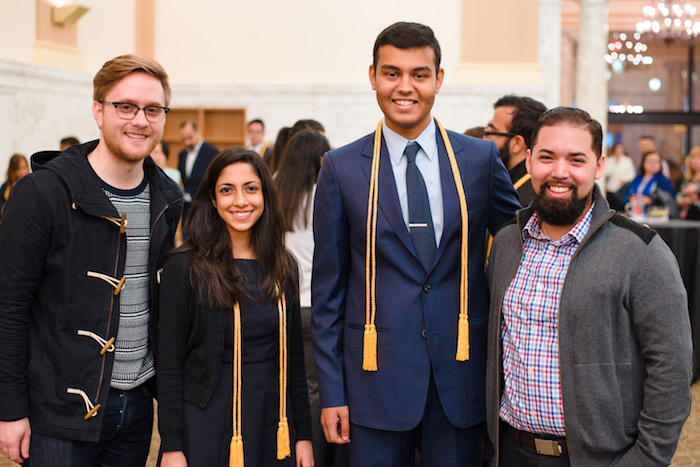