All majors and minors in the Department of Spanish and Portuguese Studies are eligible to apply. By February 15th, please submit a 500 word essay describing the relevance of proposed study abroad experience to your personal and professional goals. In addition to the essay, students should submit a resume, an official description of the accredited study abroad program they wish to attend, their acceptance letter and/or any documents submitted for the program's application. All applications should be submitted via email to the Department administrator, Ms. Harolina Menchon by February 15th. For questions, contact Ms. Harolina Menchon at harolina.menchon@rutgers.edu.

Elpidio Laguna Diaz, longtime professor and chair of the Department of Spanish and Portuguese Studies was a gentleman and a scholar, a man of great erudition and the author of three books.  In 2008 he was inducted into the “Orden de los Descubridores” by the National Collegiate Hispanic Honor Society for his outstanding contributions to Hispanism in the US.  He was also an inspirational teacher.  He and his beloved wife Asela built the modern Department of Spanish and Portuguese and made it one distinguished by faculty research and dedication to teaching.  One of Elpidio’s students once observed that “Professor Laguna could get me to take a course on counting sand if he were teaching it.”  There is no higher tribute to a scholar and a teacher than to have inspired his students in this way, to pass on his learning and his passion to successive generations.  And it is with these goals in mind that the Laguna-Diaz family established this memorial scholarship, along with the generous donations of family, friends and alumni, in order to help students in the Department of Spanish and Portuguese fund their Study Abroad travel experiences.

The Luso-Fraternal Endowed Scholarship was established by António, Nathalie and Paul Matinho, owners of the LusoAmericano Newspaper—the longest running Portuguese-language newspaper in the US. (For a short feature about LusoAmericano please click here.)  Nathalie Matinho’s father Vasco Jardim was one of the founding members of the newspaper as well as the Luso-Fraternal Association, a charitable organization set up to help newly-arrived Portuguese immigrants in Newark, New Jersey.  Many decades later, as the Portuguese population became more established, the Matinhos decided to use some of the Luso-Fraternal funds to endow scholarships at local institutions of higher education.  Rutgers University, Newark is the fortunate recipient of one of these scholarships—an award which is given annually to a student of the Portuguese and Lusophone World Studies program based on academic merit and financial need. A special faculty committee from the SPS department selects the recipients each year and the prizes are given out during the Senior Awards banquet.

This endowed scholarship was established in memory of Dr. Israel S. Stamm, Professor of German at Rutgers University, Newark from 1947-1974.  Two Israel S. Stamm Memorial Prizes are awarded annually to two graduating seniors in the Department of Spanish and Portuguese Studies who have majored in one or more modern or classical languages and who have distinguished themselves by their knowledge of that language and by their understanding and appreciation of its literature.  A special faculty committee from the SPS department selects the two recipients each year and the Israel S. Stamm prizes are given out during the Senior Awards banquet. 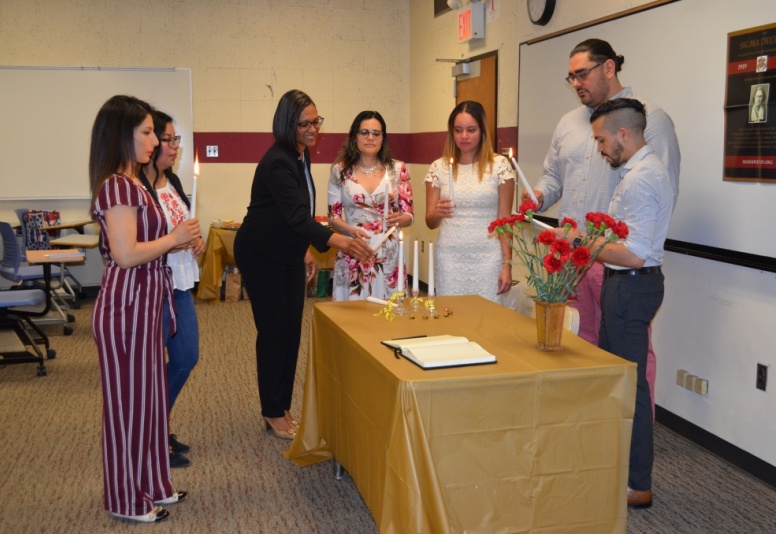 Sigma Delta Pi is the National Collegiate Hispanic Honor Society, or the Sociedad Nacional Honoraria Hispánica. Sigma Delta Pi is a national organization that was founded in 1919, and is dedicated to celebrating students’ achievements in the study of Hispanic culture and Spanish language.

Here at Rutgers-Newark, eligible Spanish majors and minors are invited to join our chapter of Sigma Delta Pi, Chi Epsilon #532, in their third or fourth year. Letters of invitation are sent out in the spring.