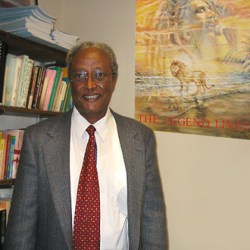 Dr. Said S. Samatar was born in 1943 in the Ogaden, a region of Ethiopia inhabited by Somalis.  He spent his childhood as a camel-herder, coming to the United States to study at Goshen College, where he earned his B.A. while working as a welder during the day to support his family. In 1979 he received his Ph.D. in African History from Northwestern University. After teaching at Eastern Kentucky University, he joined the History Department at Rutgers University–Newark in 1981.

One of the world’s leading authorities on the history of Somalia, Dr. Samatar was the author of several books, including Oral Poetry and Somali Nationalism: The Case of Sayyid Mahammad 'Abdille Hasan (Cambridge University Press, 1982), and Somalia: Nation in Search of a State (co-authored with David Laitin, Westview Press, 1987). He edited the volume In the Shadow of Conquest: Islam in Colonial Northeast Africa (Red Sea Press, 1992).  For the past 25 years Dr. Samatar served as editor of the journal The Horn of Africa.  At the time of his death he was working on a book tentatively entitled Fool’s Errand: The Search for a Central Government in Somalia.  He published many articles and essays as well and lectured widely, both in the U.S. and abroad.

An astute observer of the history and politics of his native region, Dr. Samatar was widely sought after by the media.  In 1992, he went to Somalia as a consultant and interpreter for Ted Koppel, the anchor of the ABC news program Nightline.  He appeared on the BBC, CBS, and CNN International as well as PBS' The NewsHour with Jim Lehrer, and he was quoted in The New York Times, The Washington Post, Time, Newsweek, and U.S. News & World Report. Dr. Samatar’s advice was constantly sought and freely given with candor and often with his characteristic sense of humor. The issues were serious and treated so, but, as his colleagues and students well know, Dr. Samatar never failed to see the absurd in the human condition, however painful it may have been at the time. He was a colleague engaged in the affairs of Rutgers and the larger world, a joyful dining companion, an engaging and popular teacher, and a true friend to his colleagues. His is a voice that will be deeply missed by all who had the privilege to know him.