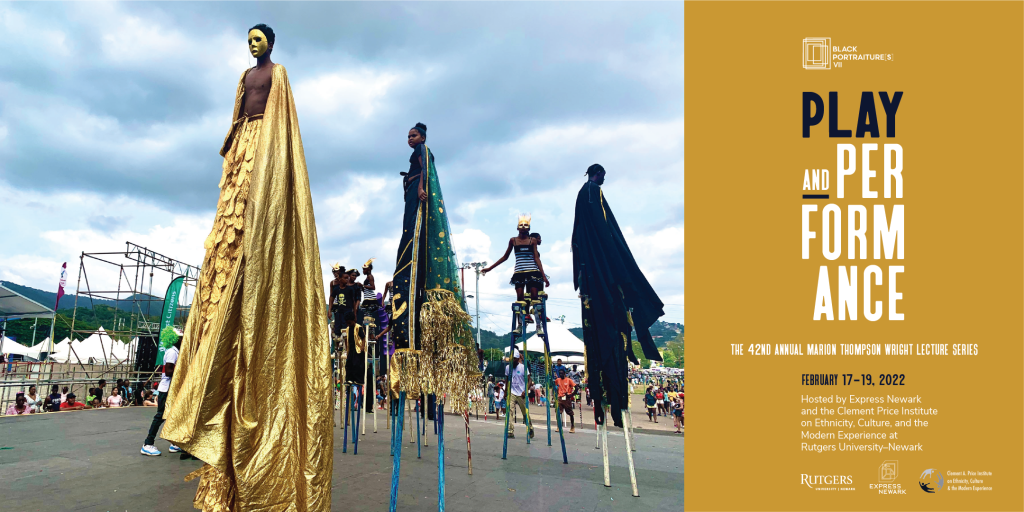 Express Newark and The Clement A. Price Institute invite you to join us virtually for the 42nd Annual Marion Thompson Wright Lecture Series as part of Black Portraiture[s] VII: Play & Performance. The conference will be held online for the general public on Saturday, February 19, 2022, at 9:30 AM EST.

Tyler Mitchell, Bisa Butler, Regina Carter, and Dominique Morisseau all foreground the themes of play, utopia, and performances in their work.

Each through their works have interpreted this concept of “play”, one that starts in the fluid space of black childhood, as a way of re-imagining race, gender, history, and Black futurity in the world today.

This re-imaging shaped by generations of African diasporic artists, musicians, scholars, and activists envisions a future void of violent oppression and sparks new possibilities of change in the present moment.

The Annual Marion Thompson Wright Lecture (MTW) series was co-founded in 1981 by Rutgers University-Newark Professor Clement A. Price and Giles R. Wright of the New Jersey Historical Commission who launched the series with the belief that the rigorous exploration of the past, made accessible to a broad public of learners, would help guide the nation into a brighter future. The conference is named in honor of a native of East Orange. Marion Thompson Wright was arguably the first black female professional historian and a pioneer in Black New Jersey historiography. In her honor, the series brings outstanding thinkers and doers of African and African American life and history. Diverse, civically engaged, and devoted to life-long learners, the MTW Series is one of the nation’s most distinguished and longest-running lectures. The Clement A. Price Institute is devoted to building deep historical justice in our region and beyond.

View Information on Past MTW Lectures

Initially, a colloquium at Harvard University on African American art convened by Professor Henry Louis Gates Jr. and Dr. Deborah Willis and Manthia Diawara at New York University held in Paris in 2013, Black Portraiture[s] is an academic conference committed to the study of African diasporic art and culture. Being held in cities as diverse as New York, Florence, Toronto, and Johannesberg, Black Portraiture[s] now attracts hundreds of scholars, artists, and activists from around the world at each convening.

If you would like more information or have questions about the event, please email us at priceinstitute@newark.rutgers.edu